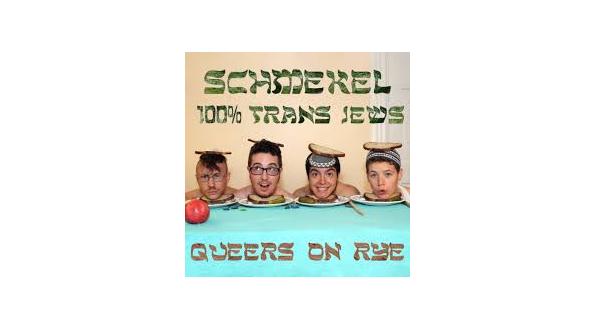 Our song for this month is I'm sorry, It’s Yom Kippur by the Brooklyn based band Schmekel (Yiddish for a small penis). The band comprises four members, Lucian Kahn (vocals and guitar), Ricky Riot (vocals and keyboard), Nogga Schwartz (bass) and Simcha Halpert-Hanson (drums). They started playing in 2010 and are a self-proclaimed ‘100% Trans Jewish band.’

One definition to the term transgender can be found in the words of Rabbi Elliot Kukla who explained the term in an article for the Transtorah website: "The term “transgender” or “trans” can be understood as a broad category that encompasses many different types of gender diversity. Anyone who can’t or doesn’t want to “match” the appearance, roles, or behaviors of the gender that they were assigned at birth might identify as trans. Some transgender people choose to undergo surgeries and/or hormone therapies so that their bodies better express their inner gender identities, others may want to take these steps but can’t afford them, and still others have chosen not to modify their bodies at all. Some transgender people identify wholly with one preferred gender category (male or female) that is just not the category they were originally assigned. […] However, there are also some transpeople who identify as neither male nor female, both male and female, or who inhabit an alternate, non-binary, gender identity."[1]

Schmekel are a unique band in regards to both the subject matter of their songs as well as their original compositions that combine, among other genres, punk music, polkas, cantorial singing, and Jewish melodies (including direct musical quotes from traditional Jewish melodies such as Chad Gadya, Ma'oz Tzur, and Al Cheyt in the The Mohel Song, I'll be your Maccabee and I'm Sorry, It's Yom Kippur respectively). They all identify with their Jewish background, and their music can be seen as a meeting point of sorts between the different identities that the members of the band carry with them.

Many of their often comical songs deal with issues of being either Jewish, trans, or both. The Jewish themed songs include the aforementioned I'm Sorry, It's Yom Kippur and  I'll be your Maccabee, as well as The Mohel Song and Pharoh/Moses Slash. Most of their other songs, while not specifically Jewish themed, deal with issues of being trans and often use comedy in order to discuss serious issues that affect the lives of trans people. One example of this is the song Shark Attack, which is about having to explain one's chest scars that are a result of chest reduction surgery without always revealing that one is trans ("Bigots are stupid but they’re also scary/Don’t want to turn into an obituary…My scars are from a shark attack! Shark attack! Shark attack!").

Traditional Judaism (known today as “orthodox”), while usually not accepting of trans people on the basis of Biblical dicta, has had a long history of a broader spectrum of gender than that of the standard male/female binary distinction. For example, there have been a few Jewish characters, both historical and fictional (like some of the American Jewish writer Isaac Bashevis Singer's characters of which Yentl, memorialized by Barbra Streisand’s film is the best known to the general public),[2] who have, in the least, changed their clothing in order to perform religious and other tasks outside of those traditionally ascribed to their original gender.[3]

In addition to these examples appearing in the canonical Jewish texts, modern authors have likened different aspects of Judaism to the experiences of trans people. Micah Bazant, for example, wrote a Zine (an independently written and distributed publication) called TimTum in which he discusses being both Jewish and trans, saying that "being Jewish is so much about galut (exile) – being in a place, but not fully there - a sense of displacement, millennia of wandering, of watching your back. While at the same time, today in North America, assimilating. […] I am thinking about the term 'passing.' As a Jew, it means assimilation. Passing always means being accepted into a more dominant group: white, Christian, non trans, etc." (Bazant 44, 46) Here Bazant equates the experience of a Jew trying to fit in and pass as a gentile with the experience of a trans person trying to pass as a specific gender. He continues by saying, "that's the point – I am wrong – I don't fit. And I think a lot of people, whatever their gender presentation, don't fit either, they don't feel like 'real men' or 'real women'." (Bazant, 48).

Despite these interpretations of the Bible and of Judaism, neither the different gender variants presented in the Talmud nor trans people are usually considered to be equal participants in Jewish rituals. Bazant writes about his feelings at the synagogue when he is faced with a Mehitza (a divider between men and women at traditional synagogues): "I see a sign at the entrance to the sanctuary 'Please respect our traditional separate seating arrangement. Men sit at front, women at the back.' I get back on my bike and head out into the rain." (Bazant, 53).

Going back to our song of the month, I'm Sorry, It’s Yom Kippur is the first song of Schmekel's debut album ‘Queers on Rye,’ which was released in 2011. It begins with a reverb drenched traditional Ashkenazi call for a tekia'a that is followed by the blowing of a Shofar. After the tekia'a there is a short, slow piano introduction before the upbeat song begins. The song has three verses, a chorus, and a bridge. Each verse consists of four lines separated into two couplets. Each couplet has its own rhyme, giving the verses a rhyme scheme of aa bb cc dd... The verses' melody is also split into the same couplets with each couplet going from I (in a minor scale) to V.

Each of the song's lines consists of an apology for various acts carried out by the narrator that are both serious, tongue in cheek, and humorous. These include apologizing for writing to someone with an authoritative tone, for accusing someone of being weird because they used gender-neutral pronouns like “they” and “sie” and “hir,”[6] and for leaving all of one's "dildoes in the sink." Kahn says on writing the song: "Yom Kippur has always been a difficult holiday for me, because I find the idea of 'sin' a lot more intense and damning than the idea of 'screwing up,' which seems a lot more appropriate to my actual life experience. I used to grit my teeth through Yom Kippur because I couldn’t accept that diabolical 'sin' idea, but in 2010 I thought, 'Okay, what if I take all the ‘fire and sword and beast’ of this holiday with a pillar of salt, and instead reflect with a sense of humor upon my mess-ups.' That turned out to be more productive."

The apologies are structured in clear reference to the confession section of the Yom Kippur liturgy (Ha-vidduy ha-gadol), and specifically to the ‘Al het prayer, which in fact bookends the song. Here are some of the opening lines of the Hebrew prayer:

Compare with the opening lines of ‘I’m Sorry, It’s Yom Kippur’ that trade the communitarian and penitential formula addressed to the Almighty “For the sin which we have committed against You” with the individual and more mundane “I’m sorry” addressed to a rather unidentified partner:

The song's slow introduction was, according to Halpert-Hanson, taken from the "mi-sinai nusach[7]  for the ‘Al het prayer." Furthermore, the prayer's original Hebrew words appear in the song's last line: "'Al Cheyt SheChatanu for dressing like Queen Esther." These references simultaneously connect the song to a specific (and sanctified) Jewish liturgical tradition, but are also a sarcastic apology for being criticized for dressing in a manner that does not conform to traditional gender roles. In that sense, the line summarizes many of the song's, and on a broader scale, the band's themes that connect between Jewish traditions, broader interpretations of gender, and the intolerant reaction that generally accompany those interpretations from orthodox Jewish circles.

The song ends with the melody of the chorus sung in a niggun-like manner, which practically invites the listener to get up and dance a hora (an Israeli folk dance, apparently not a rare occurrence at a Schmekel concert). Riot summarizes the writing process of the song's music by saying that: "when Lucian started writing 'I’m Sorry, It’s Yom Kippur,' it was a punk song. I wanted the verses to sound cantorial [remnants of this can be heard in Riot's backup singing especially at the end of the third verse], so we changed the punk progression to one in harmonic minor. The chorus has this chord change that was influenced by the Israeli songs I used to listen to on family car trips when I was a kid. I never thought all those IDF [Israel Defense Forces] band tapes that my parents listen to would actually be channelled [sic] in my writing but life is full of surprises." Perhaps the song can best be summarized by Halpert-Hanson who said, when referring to the bookending of the song: "the result is the echo of liturgical music set to a new queer text of ‘Al het."

*A historical note by Edwin Seroussi: "the irreverent reflecting on sacred liturgical texts such as ‘Al het in not necessarily a postmodern phenomenon found on the fringe or indie sections of the (Jewish) entertainment scene. The Yiddish theatre and vaudeville included copious direct or indirect quotations (musical or textual or both) of prayers. Such references played on the implicit knowledge of the liturgy by a majority of the audience, even among the non-observant. Relevant to the song of the month is the song ‘Der nayer al chet’ (attribution of  lyrics by Morris Rund, music by Sholom Secunda needs to be verified) that was recorded commercially by Pessah “Peisachke” Burstein (1896-1986) aka “The Vilner Komiker” for Columbia records in New York (10395, matrix W 109493-1) after 1923[8] and rereleased in 1967 in the LP “The Vilner Komiker” At His Best by The Greater Recording Company, a subsidiary of Columbia (GRC 100, matrix XTV 103675) in the series Rare Yiddish Theatre Songs (Listen to the recording in Judaica Sound Archives of the FAU library. Additional copy of the recording can be found in Dartmouth Jewish Sound Archive)."

Jewish Mosaic , the National Center for Sexual and Gender Diversity.

Schmekel's Official website: Includes biographies of the band members, lyrics to all of their songs, links to most of the press written about them, interviews, contact information and a link to purchase their album Queers on Rye.

Trans Torah: "TransTorah helps people of all genders to fully access and transform Jewish tradition, and helps Jewish communities to be welcoming sanctuaries for people of all genders." The website includes prayers for people who are transitioning, biblical interpretations in regards to gender, articles on the topic of gender and Judaism as well as an extensive bibliography.

Two part Interview with Professor Joy Ladin of Yeshiva University on being transgender and Jewish.

My Tender Gender all Mixed Up in a Blender: an Israeli trans/gender zine.

Thanks to Schmekel for their time and cooperation.

[5] The subject was treated in detail in the past by authors such as Sander Gilman, Daniel Boyarin and Admiel Kosman. For a relatively recent treatment of the subject in relation to American Jewish literature and arts see, Hoffman, Warren D. The Passing Game: Querring Jewish American Culture. Syracuse, N.Y: Syracuse University Press, 2009.

[6] For more information on pronouns and names see here: http://www.transtorah.org/PDFs/Trans_Etiquette_101.pdf.

[7] A system of cantorial motifs that are based on ancient musical modes along with secular medieval music. Their names are derived from the belief that there are the original modes given to the Children of Israel at Mount Sinai.

Recording of the song from the album 'Queers on Rye', released in 2011.
Used with permission from the band.