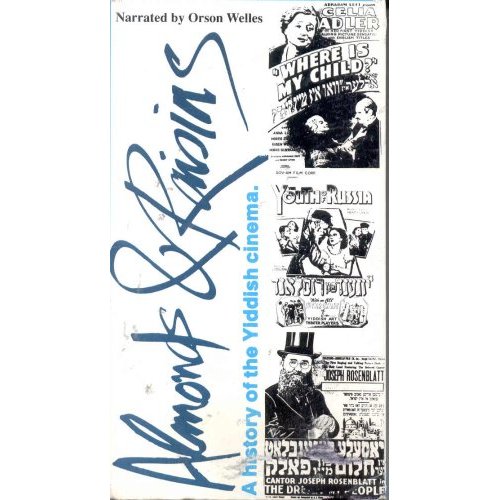 Yiddish talking cinema burst into the film scene after the release of the first talkie, The Jazz Singer in 1927. Over the next 13 years more than 300 films were made in Yiddish. In Almonds and Raisins (named after a popular Yiddish song), director Russ Karel and narrator Orson Welles, scan the history of the genre from some of the earlier films such as Uncle Moses (1932) through some of the later films of such as Mamale (1938). Many of these films deal with issues that arose with the eastern European Jewish immigrants who arrived in New York in the millions at the turn of the 20th century including poverty, sweat shops and exploitation, unionization, seeing their children succeed where they could not, and a romanticization of the abandoned Shtetl life.

Furthermore, many of these hundreds of films were musicals that prominently featured Yiddish music and Almonds and Raisins gives a special emphasis to the meeting point of cinema with music and Jewish traditions as can be found in this genre. Some significant examples are Joseph Green's Yidl Mitn Fidl (1936) with Molly Picon, Ilya Motyleff's The Cantor's Son (1937)and Max Nosseck's Ovetrue to Glory (1940) both of which star cantor Moyshe Oysher who sings both Yiddish popular songs and Jewish liturgical music.

This film is an excellent document for being introduced to the central themes, actors, directors, films and music of Yiddish cinema.

Excerpt from the film featuring a short segment from a Yiddish Western Film:

Yiddish talking cinema burst into the film scene after the release of the first talkie,...

This 1926 silent film was re-edited and had dialogue and music added to it in 1932. It's theme is similar to many other Yiddish films of that era. It is about...

Film about the hardships of Jewish immigrants in New York City during the 1930s.