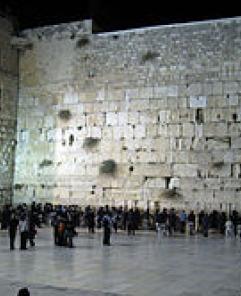 Arvit is the last of the three daily services of the Jewish liturgy, along with Shaharit and Minha which are conducted in the morning and in the afternoon, respectively. The Arvit service is held after nightfall, and is often conducted immediately after a late-afternoon Minha service.

The service is also popularly known as Ma'ariv. This term was first used in the 16th century and originates from "hama'ariv aravim," the ending phrase of the first blessing that precedes the Shm'a recitation during the Arvit service. According to tradition, it was Jacob who created the Arvit service (the morning prayer of Shaharit is credited to Abraham and the afternoon prayer of Minha to Isaac). In the Talmud, Ma'ariv has been described as a non-mandatory service, although Psalms 55:18 and Daniel 6:11 support the popular opinion that it is, in fact, mandatory as part of the three daily prayers. However, it is only obligatory on the individual and, unlike the other two services, Arvit does not have to be conducted in a minyan.

The service's current nusah begins by inviting the congregants to prayer with the Barkhu blessing. This is followed by the recitation of the Shm'a and the Amida, the silent standing prayer. According to the Mishna, the Shm'a of the Arvit service has to be said after nightfall. This is because of the verse in the Shm'a that commands recitation of the prayer “when you lie down and when you rise.”[1]

The Shm'a recitation is surrounded by three blessings, two preceeding and one following.  A common theme linking the Shm'a's two introductory blessings is how they both describe the cosmic occurrence of night and day. The second blessing gives thanks for the love that God showed the Israelites by giving them the Torah. Following the Shm'a is a prayer which praises God for redeemption from slavery in Egypt. This pattern of three blessings originated in the morning Shaharit prayers.

The Shm'a section ends with Hashkiveinu ("Hashkiveinu hashem elokeinu leshalom"), which asks God for protection from danger and harm. This blessing has two versions, the Babylonian and the Jerusalemite. The former is recited on weekdays if they do not fall on holidays. It ends with the generic formula, “who protects Israel, his people, forever,” ("Shomer amo yisrael la'ad"). In contrast, the Jerusalemite version ends with the line “[God] spreads his canopy of peace over us, over all his people Israel, and over Jerusalem”.[2] This is a more personal version and is used for the Sabbath and Holidays.

The Amida is recited silently while standing facing Jerusalem. It is referred to in the Mishna and Talmud when the Erev (evening) or Arvit services are discussed. Becuase Arvit is technically considered a non-mandatory service, repetition of the Amida by the service leader ("hazarat hashatz"), a fixture of both Shaharit and Minha, is not part of the Arvit service, even when the prayers are recited in a synagogue. The Amida is preceded by a half Kaddish and is followed by a full Kaddish. The service usually ends with the chanting of Aleinu Leshabeah. Some communities, however, follow this with the recitation of several Psalms.

There are a few changes in the Arvit service on the Sabbath and on holidays. On Sabbath eve the service is preceded by the Kabbalat Shabbat service and the Amida only contains seven blessings compared to the 19 that appear on weekdays. The same three blessings open and close the Amida, while in between them lies a blessing for the holiness of the Sabbath. The Amida is followed by a short closing section that includes verses from Genesis 2:1-3, a shortened version of the Avot blessing that opens the Amida, as well as a summary of the Amida that touches on all seven blessings. It is followed by Kaddish.

The beginning of the service

Sephardim and Hasidim begin by reciting Psalm 134: “Song of Ascents: Praise the lord...” as well as Psukei Bitahon, specific Psalms whose character is thought to both help one become closer to God, as well as grant aid during times of turmoil and stress. Following this, the cantor chants “Barkhu et hashem hamevorakh,” to which the congregation, followed by the cantor, reply, “Barkhu et hashem hamevorakh le'olam va'ed.”

In a number of traditions, the final blessing of the Amida during Arvit has a minor change from the Shaharit morning prayers: instead of "Sim shalom,” “Shalom rav” is used in the evening.

The end of the service

Sephardim and some Hasidim recite Psalm 121 to end the service: "Shir lama'a lot esah einei el haharim…" ("A song of ascents. I will lift up my eyes to the hills…"). The Psalm is followed by the Mourners' Kaddish and the Barkhu blessing, which is repeated for those who arrived late and did not hear it at the beginning of the service. Chabad Hasidim, as well as congregations who pray according to the Ashkenazi nusah, finish the service by chanting Aleinu Leshabeah and the Mourners' Kaddish, prayers that traditionally end most of the services throughout the year.

Arvit is the last of the three daily services of the Jewish liturgy, along with Shaharit and Minha which are conducted in the morning and in the...

Cross-Repertoire Motifs in Liturgical Music of the Ashkenazi Tradition: An Initial Lay of the Land

The earlier version, entitled “Cross-Repertoire Motifs in the Liturgical Music of Ashkenazi Tradition,” was presented at the World Congress of Jewish Studies,...