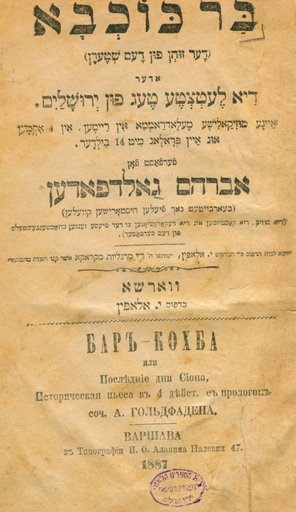 In 1881 Tsar Alexander II was assassinated, issuing a period of great social instability and political peril for Jews living in Russia. Under the rule of his successor Alexander III, Jews experienced increased violence and oppression. In response to this political upheaval, Goldfaden came under attack from critiques for his farcical representations of Jews in plays such as Shmendrik and Tsvey Kuni Lemel. In response to this criticism, Goldfaden turned his attention to Jewish history and tradition as a source for his dramas. One of Goldfaden’s important works in this genre was the historical operetta Bar Kochba, which premiered in Odessa in 1883. This tragic operetta follows the story of Simon Bar Kochba, the leader of the Jewish revolt against the Hadrian [Roman] Empire from 132-135 C.E. The image above is the title page of Bar Kochba script published in Warsaw in 1887. Source: Yiddish Drama Collection at the Jewish National and University Library.