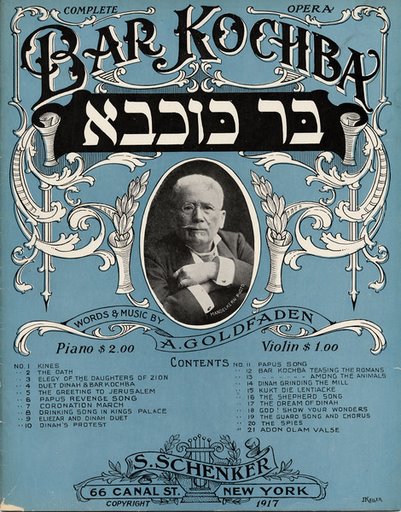 The dramas Bar Kochba and Shulamit represented a new phase in Goldfaden’s creative output. Many scholars speculate that Bar Kochba’s representation of Jewish rebellion was viewed as a threat by Russian officials and therefore played a role in the government’s decision to place a full ban on Yiddish theater in February of 1883. As a result of this ban, many writers immigrated to less hostile European cities and to America. In 1885, Goldfaden traveled to Warsaw, where he laid foundations for a new Yiddish theater called the Daytsh teater (Jewish German Theater). Many of Goldfaden’s plays were published in Warsaw during this period, among them Bar Kochba, which was released in 1887. The image above is a score of Goldfaden’s Bar Kochba operetta arranged for Piano and violin published by S. Schenker in 1917. Source: Jacob Michael collection of Jewish Music at the Department of Music of the Jewish National and University Library.