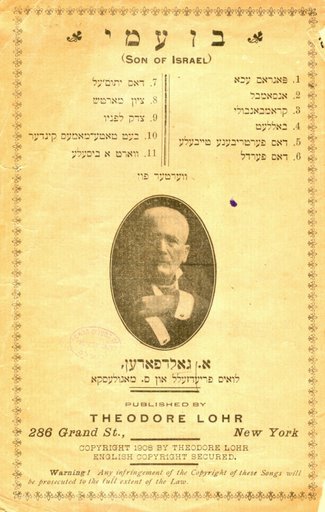 The image above is the title page of Goldfaden's drama Ben Ami published by Theodore Lohr in New York in 1908. Goldfaden's drama Ben Ami is based on George Elliot's (Mary Anne Evans, 1819-1880) novel Daniel Deronda (1876). Ben Ami tells the story of a disaffected European aristocrat who rediscovers his Jewish heritage and immigrates to the Land of Israel to work as a farmer. Goldfaden had some difficulty staging his new drama, until Boris Thomashevsky agreed to produce it at his People's Theater, in collaboration with Sigmund Mogulesko and music director Louis Friedsell. The play was premiered in December of 1907, approximately one month before Goldfaden's death. After Goldfaden passed, the play continued to run for six months, with overwhelming success. Source: Yiddish Drama Collection at the Jewish National and University Library.