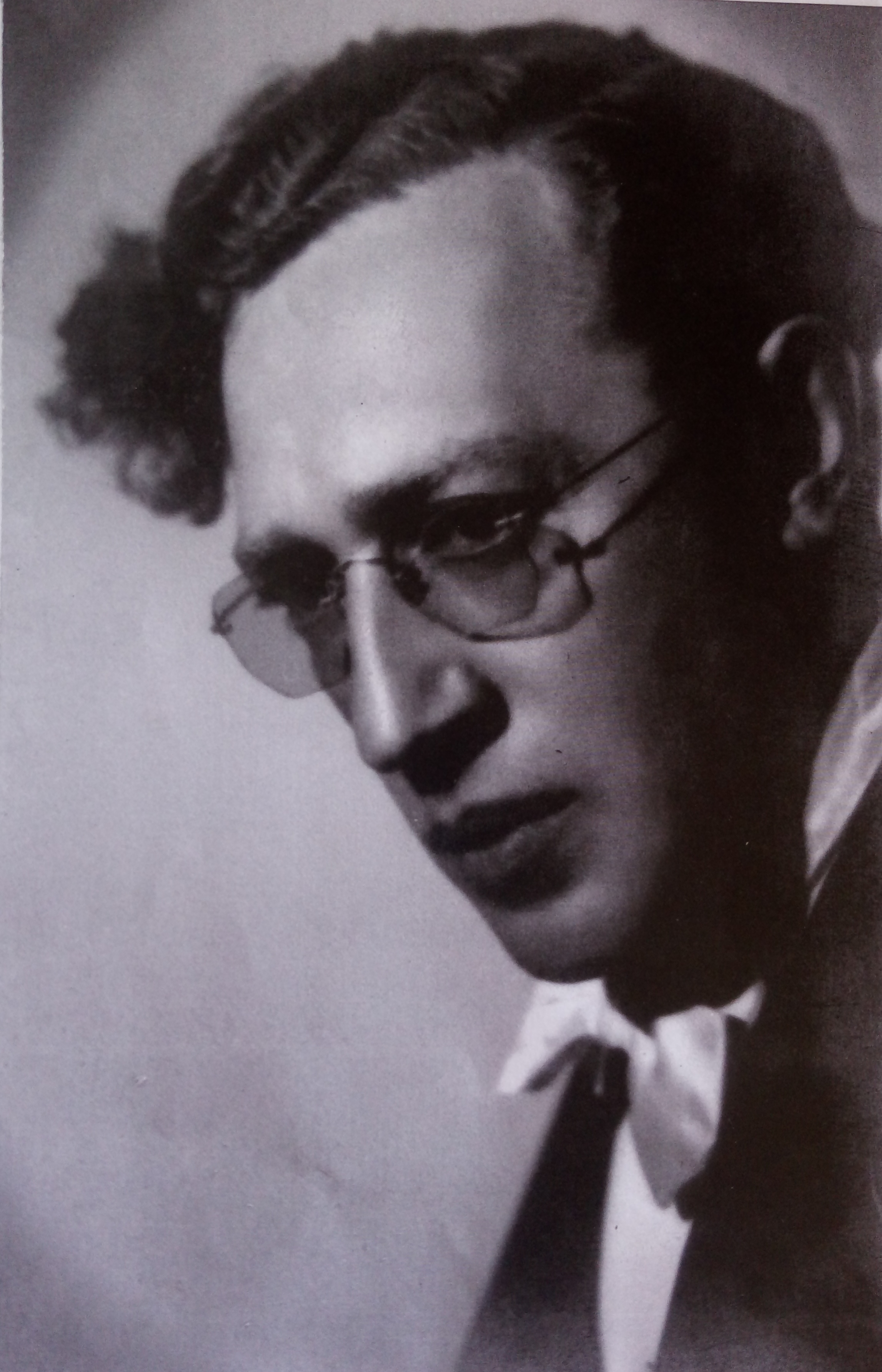 Bernardo Feuer was born on May 1st, 1910 in Lemberg [Lviv], a city then part of the Austro-Hungarian Empire but now in Ukraine. He was the son of Mordechai [Markos] Feuer and of Rojme [Roshme] Pese, who died when Feuer was a child. His father worked as the caretaker of a synagogue and the family had four children: Alter, Miriam, Isaac and the youngest, Bernardo.

He attended primary and secondary school in his hometown and was drawn to music from an early age. Feuer learned the basics of music from his father, and later joined several liturgical choirs. When he was fifteen, he had his first opportunity to conduct, as the conductor of one of his choirs was sick and requested that Feuer fill in, with the approval of the other singers and especially of Feuer’s father.

Feuer continued his studies for a brief period in Warsaw, though his family does not know exactly where or with whom he studied. In 1930, he left Lemberg and his family behind, and arrived in Buenos Aires, Argentina, where his brother Isaac already lived. Feuer then contacted the hazzan Tzvi Wilner, with whom he studied while working as a painter. He continued more advanced studies in hazzanut with L. Herer. In 1930, the same year of his arrival, Feuer formed a liturgical choir in the Dr. Max Nordau synagogue. In 1937, he founded another choir, which he named Hazomir. Out of this core group of young amateurs, some early members of Hazomir would eventually become the respected hazzanim in Argentina, among them Kalmele Weitz, Oscar Haller, Aaron Gutman, and Leibele Schwartz.

The Hazormir choir repertoire was not exclusively synagogue material and included arrangements of Jewish folk songs, choral parts of operas in the original language or translated to Yiddish, workers’ songs, and choral symphonies drawn from popular repertoire. In addition, Feuer composed works expressly for the choir. During this period Feuer also taught music in different Jewish schools in Buenos Aires, where he also conducted the children's choirs.

In 1942, he moved to the city of Rosario (Santa Fe province) to work at the Israelite Association of Rosario. He led that institution’s liturgical choir while David Hickpoff was hazzan. He also worked as a music teacher at J.N. Bialik School, where he created and conducted a children’s choir and a polyphonic choir, which he also called Hazomir. This “second Hazomir” began with twenty-four young people and in five years, it doubled its membership.

On October 5th, 1942, Bernardo Feuer joined the Socialist Zionist organization “Poalei Sion-Seire Sion.” Living in Rosario, he also worked in the city of Santa Fe, the provincial capital, located about 180 kilometers away, where he worked as a music teacher and conductor of another Hazomir choir.

In 1952 he moved to Santiago de Chile to found the liturgical choir of the Israelite Circle. Israel Farba, a student of Feuer, was the hazzan at that time. Feuer also gave music classes and conducted the choirs of children and adolescents in the schools belonging to the “Vaad Hajinuj” (Central Organization of Jewish Education) and the School of Humanities in Santiago de Chile. Together with Bernardo Baytelman Dolber[1], they proposed to the “Vaad Hajinuj” to establish a Jewish folk choir with the aim of spreading Jewish culture through the preservation and transmission of their secular music. This choir was part of the Hazomir Cultural Center and Baytelman became the president. This choir participated both in Jewish community events and in Chilean musical festivals, such as the International Choral and Folklore Art Festival organized by the University Choir of the University of Chile.  In 1954, the choir recorded a series of records, which was sold in a boxed set.

Golda Meir meets Bernardo Feuer during her visit to Argentina, 1959

Feuer also worked with the Sephardic Jewish and the German Jewish (Bnei Israel) community in Chile, and promoted cultural exchanges with the Choir of the University of Santiago de Chile. In 1957, he left Chile for Peru and formed a liturgical choir whose hazzan was Leibele Schwartz, and another choir which he also named Hazomir. This new Hazomir choir made its debut in 1958 at the Municipal Theater of Lima, in celebration of the tenth anniversary of the creation of the State of Israel. With this choir, Feuer entered a competition organized by the University of San Marcos, winning first prize with Al Naharot Bavel, his piece based on Psalm 137 and scored for choir, soloists and orchestra.

He then taught at the León Pinedo School in Lima until 1959. That same year, he toured South America, accompanying the hazzan David Kusevitzky, and then returned to Buenos Aires, where he founded the Hazomir choir of the A.M.I.A. (Argentine Israelite Mutual Association). With this choir he toured Argentina and neighboring countries, and participated in cultural events, festivals and choral cycles. He also took part in the inauguration of the Casa Argentina en Israel (Buenos Aires), gave concerts in the embassies of several countries, and was involved with various radio and television programs, all in Buenos Aires.

Between 1960 and 1970, he directed the liturgical choir of the Great Israelite Temple on Paso Street, during which time Aaron Gutman was hazzan. Feuer also formed, in 1960, the first youth choir from the Youth Group Ramah,[2] which was directed by Rabbi Marshall Meyer. He also prepared the first Bat Mitzvah ceremonies in the Sephardic community during this period.

A photo of the Hazomir choir in Rosario, Argentina, late 1950s

In 1960 Feuer formed a special chorus of Hazzanim drawn from singers in Buenos Aires and others from the surrounding provinces. He was an ad honorem advisor to the Hazzanim Society of Argentina and enjoyed respect and recognition from many colleagues. He also created and conducted the parents’ choir of the Medinat Israel School, which still bears his name.

Feuer composed works based on texts by Jewish poets such as Chaim Nachman Bialik, Isaac Leib Peretz and Mark Warshawsky, children's music, liturgical music, choir works, choral symphonies, and cantatas. Among his works, the symphonic poem Destrucción, resistencia, reconstrucción (unpublished) stands out, as does the Yiddish song Zalmele, which tells the story of an anonymous child in the Lublin Ghetto. The text was first published as a poem in a Yiddish newspaper in Buenos Aires, and subsequently his mother-in-law suggested writing music for the text. This song version became well-known and was performed by many artists, including David Hitzkopf, whose version from 1951 is below.

Feuer died suddenly of a heart attack in Buenos Aires, on November 23rd, 1967.

Documents and photographs for this article provided by the family archive of Raquel Feuer (Buenos Aires, Argentina).

[1] He was a volunteer of the Vaad Hajinuj in Chile.

[2] “Agrupación Juvenil Ramah”, (Youth Group Ramah), belonged to the Israelite Congregation of Argentina. This group was created by Rabbi Meyer in 1959. Ramah carried out cultural, social and religious activities.

Bernardo Feuer was born on May 1st, 1910 in Lemberg [Lviv], a city then part of the Austro-Hungarian Empire but now in Ukraine. He was the son of Mordechai [Markos] Feuer...

Collection of original compositions and arrangements for the Shabbat Morning Service.