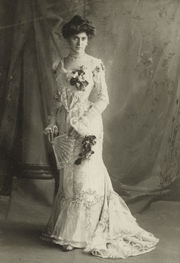 Yiddish theater and Broadway actress Bertha Kalish was born in Lemberg (present day Lviv, Ukraine) ca. 1872. She began her stage career as a member of the choir at the Polish Theater.  By the age of seventeen, Kalish was performing regularly at Yakov Ber Gimpel’s Yiddish Theater. Kalish played the starring role in Gimpel’s production of Abraham Goldfadn's play Shulamit. Kalish also toured with Goldfadn’s company in Budapest and Bucharest, where she enjoyed great popularity. Kalish immigrated to New York City in 1896, where she became a mainstay of the Yiddish theater, until 1905 when she transitioned to Broadway and other English-language theater. Between 1905 and 1926, Kalish starred in over ten plays including: Monna Vanna (1905), The Kreutzer Sonata (1906), The Riddle Woman (1918), and Jitta’s Atonement (1923). Throughout her career, Kalish continued to make appearances on the Yiddish stage, most notably in Joseph Rumshinsky's revival production of Goldfadn’s Shulamit in 1922. In addition, one of Kalish’s most memorable roles was as the cross-dressing star of Shakespeare’s Hamlet in 1901 at the Thalia Theater.