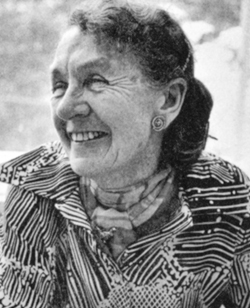 Bessie Schönberg was born in Hanover, Germany in December 1906, the youngest of three girls. Her American born mother, Rose MacGrew married Alexander Schönberg, then an engineering student, while studying music in Germany. When Bessie Schönberg was very young the family moved often as MacGrew pursued a career as opera singer. In 1911 or 1912 however, apparently due to her mother's illness and problems in the marriage, MacGrew suddenly left the family and returned to the United States. Two years later Schönberg's father was called into active military duty and she and her sisters were left in the care of Gertrude Bierschenk, a young woman originally hired as a companion to Schönberg's mother. She moved to Dresden with the three girls at the start of World War I.

At age seventeen, Schönberg moved to Eugene, Oregon to be with her mother and to study at the University there. Finally she had an opportunity to study dance, in which her father had never approved of her becoming involved. Yet after the rich cultural climate she had experienced in Dresden she was at first quite dissatisfied with the teachers and art she experienced in the United States. It wasn't until 1927 when Martha Hill joined the faculty of the University of Oregon that Schönberg became truly inspired by her studies in dance.

In 1929 Schönberg decided to leave Oregon with Hill and go to New York to study dance. Hill helped Schönberg in numerous ways, including arranging for her to meet Martha Graham. After taking a few classes with Graham, Schönberg was invited to join her company and had the opportunity to observe the earliest years of the company's existence and Graham's development as an artist. She performed in the original casts of such Graham masterworks as Heretic (1929) and Primitive Mysteries (1931), as well as with other choreographers through her connection to the Neighborhood Playhouse. Unfortunately, a knee injury in 1931 prematurely ended Schönberg’s performance career. During this same period she met Dimitry Varley, an economist working for the Department of Labor. They married in January of 1934.

With encouragement from her husband, Schönberg turned to teaching. In 1934 she earned a BA from Bennington College and served as Hill’s teaching assistant during the college’s first summer program, where Graham, Doris Humphrey and Charles Weidman famously taught. Observing these masters, Schönberg began to rethink the traditional role of a teacher. She believed that students trained to imitate movement were missing the exploration of their own expressive style. She expanded these groundbreaking ideas during her next post, first as dance professor then as dance department director, at Sarah Lawrence College (1941- 1975).

Her unique approach included focusing on fundamental movement principles, and then exploring all possible variations, before defining a set of boundaries and developing a short study to perform in class. Her teachings expanded dancers’ analytical reasoning, their communication skills and interest in each other.

When 70-year-old Bessie took mandatory retirement from Sarah Lawrence, she embarked on the most expansive lap of her career, teaching everywhere from Dance Theater Workshop, London School of Contemporary Dance, Laban Centre and Dance Theatre of Harlem to The Juilliard School, Jacob’s Pillow Dance Festival and New York University.

Nearly every American dance organization has bestowed its award upon Schönberg, and two Manhattan theaters bear her name. Since 1983 her first name has been synonymous with Dance Theater Workshop’s New York Dance and Performance “Bessie” Awards. This annual honor celebrates the creation of innovative work in tough times and reflects the life that Bessie lived.

For an elaborate explanation about the song, see Song of The Month, March 2010.