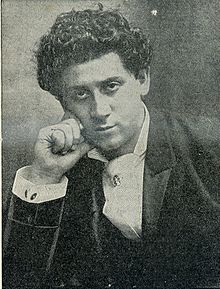 Boris Thomashevsky, son of Yiddish actor and playwright Pincas Thomashevsky, was born in Tarasche, a small town near Kiev, Ukraine in 1868. He immigrated to the United States in 1881, and settled in New York City. Shortly after arriving to New York, Thomashevsky joined a Synagogue chorister on the Lower East Side, which brought him in contact with Synagogue trustee, and wealthy salon-owner, Frank Wolf. With Wolf’s financial backing, Thomashevsky orchestrated an American tour for a Yiddish theater company based in London. The troupe, with Thomashevsky’s help, produced Abraham Goldfadn’s play “The Witch” at Turn Hall on August 18, 1882. This production, credited to Thomashevsky’s initiative, is commonly considered to be the beginning of Yiddish Theater in America.

Although Thomashevsky was primarily associated with the popular commercial theater (schund), he made many important contributions that improved and enriched the Yiddish theater. Firstly, he was dedicated to promoting Jacob Gordin and Leon Kobrin's literary Yiddish plays, when other theater producers shied away. Secondly, Thomashevsky was involved in helping to bring a number of high quality European actors and dramatists to America. He sponsored Ossip Dymov, Jacob Ben-Ami, Samuel Goldenberg, Michael Michaelesco, Aaron Lebedeff, and many others.

In 1903, Thomashevsky became a partner at the People’s Theater on the Lower East Side along with famed actor and producer Jacob P. Adler. Shortly thereafter, Adler left the theater and Thomashevsky continued as the sole manager and producer of the People’s Theater. By 1912, Thomashevsky owned his own venue, the Downtown National Theater. In 1916, renowned composer Joseph Rumshinsky came aboard as the official composer of the National Theater. Thomashevsky produced and starred in a wide variety of productions: Jewish versions of Uncle Tom’s Cabin, Goethe’s Faust, and even Wagner’s Parsifal. One of Thomashevsky’s most celebrated roles was in a Yiddish-language production of Shakespeare's Hamlet.  Likewise, his wife Bessie Thomashevsky was widely acclaimed for her leading role in a production of Oscar Wilde’s Salome.

During the spring of 1918, Thomashevsky began to lay plans to open a Yiddish-speaking theater on Broadway.  His opening season was to include The Woman Cantor, The Broken Violin, Mozel Tov, and The Pintele Yid. These plans were delayed until 1923, when Thomashevsky presented Three Little Business Men and the Jolly Tailors at the Nora Bayes Theater. These shows gained little traction, and Thomashevsky’s Broadway aspirations faded.

Thomashevsky was undoubtedly one of the most important and influential personalities in the American Yiddish Theater. His contributions as an actor, as well as his involvement as a producer and manager, greatly helped to shape the nature of the Yiddish Theater in New York and beyond.

Boris Thomashevsky, son of Yiddish actor and playwright Pincas Thomashevsky, was born in Tarasche, a small town near Kiev, Ukraine in 1868. He immigrated to the United States in 1881, and...

Anshel Schorr, son of prominent Lemberg cantor Baruch Schorr, was a mainstay of Yiddish Theater in New York and...

Paul Muni was born in Lemberg, Austria in 1895. Muni's parents, both actors in a traveling Yiddish repertory company, immigrated to America in 1899. As a young boy, Muni made several appearances...