Cute Boy, Charming Girl: Children’s Songs of the Modern Hebrew Nation(1882-1948) presents Hebrew songs written for and sung by Jewish children in pre-state Israel. The selection represents highlights in the development of this genre in the first half of the twentieth century. It includes poems by canonical poets that were set to music by professional composers, songs by amateur poets and composers, translated songs, and borrowed melodies.

Most of the songs chosen for Cute Boy, Charming Girl are not part of today’s children’s repertoire in Israel but they were rather well-known in the past. They cannot be found today, either on commercial recordings or online. In addition, the recordings here are sung by adults who sang these songs in their childhood— either in pre-school, kindergarten or elementary school, or else at home with their parents.

See Song of the Month February 2014, which includes fascinating elaborations about the song Para Para (cow cow) from the CD. 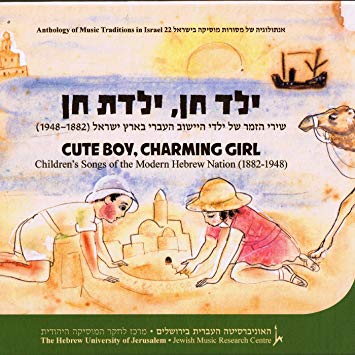 In the Israeli imagination, the Mediterranean Sea evokes at once the western frontier, the venue from which one arrives to the Land of Israel, as well as the vital connection to the outside world, tangible or imaginary. For this reason songs about boats, sea travel and ports are also conspicuous in the children’s repertoire in Hebrew.

One example is ‘Song of the Port’ written by the eminent poetess Lea Goldberg to mark the celebration of the opening of the Tel Aviv seaport in 1936. The song, published in Davar le-yeladim (an influential children’s newspaper published by the Labor Party), resounds with optimistic markers of progress and industrial activism: ‘A thousand hands unload and build / we conquer the seashore and the wave / we are building a harbor here!’

For one voice, with chordal accompaniment. Songs of various poets, Hebrew lyrics under the notes and separately.