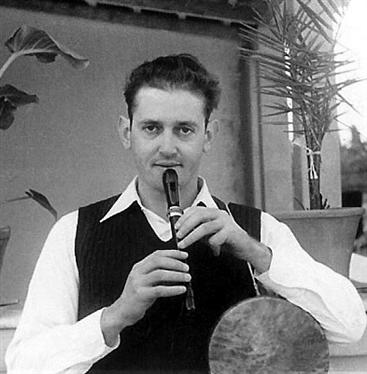 Emanuel Zamir was a unique figure in the field of Hebrew Folksong (Zemer Ivri). He was born in Petakh Tikva, to parents who were among the founders of the colony. At an early age, he was influenced by the songs of composer Matitiyahu Shelem of Kibbutz Ramat-Yochanan.

In 1944, Zamir began studying at the Jerusalem Teachers' Seminary, where he was certified as a teacher in 1946, and in 1947 he moved to Haifa to teach. He also studied Literature, bible studies, and language studies at the Hebrew University in Jerusalem. During these years, owing to his brother being the chair of Agudat Hanokdim (the association of the sheep and goats breeders in Israel, Zamir got acquainted with sheep breeding, a theme which later appeared in several of his songs. Zamir's songs, in general, for which he wrote both words and music, portray sceneries borrowed from the world of agriculture. This includes shepherds with flutes, and girls bearing water wells. This can be seen in his shepherds' and harvesters' songs that he wrote in reference to the pioneering spirit of the young Jewish "Halutzim" who were settling Palestine and working its land. Two examples of these songs are Erev Sach,one his first songs, and Be'er Basadeh (see sound examples).

Zamir served in the Israel Defense Forces during the Arab-Israeli war of 1948. There he created groups of singers and players, and founded a small orchestra, that was later turned into the IDF Orchestra. He was also the commander of the National Base for the Arts.

Following his discharge from military service in 1950, he went on to finish his studies at the Hebrew University. After concluding his studies, Zamir began working as a kind of troubadour, spreading his and others' songs through singing classes and Hebrew folksong (Zemer Ivri) groups. These he established in cities, villages, towns, and immigrant camps (Ma'abarot), all across Israel. Each class contained a band that prepared a Hebrew folksong for performance. Apart from these small bands, Zamir also established a main band, which recorded songs and accompanied singers, with Gil Aldema on the Accordion. Their recordings played an active role in the development of the Israeli folk dance.

Zamir had a sense of mission, which he brought into practice through his singing classes, and on which he wrote, "we are keeping the 'flame burning,' we are the flame. We must keep it burning, because we are being stormed from different directions." In these words he referred to foreign songs that were played on the radio, and were mainly sold on records. In this hopeless struggle against foreign music, in 1948, Zamir started broadcasting on all of the radio stations, playing songs that he thought expressed Hebrew spirit.

In a Tslilei Miryam issue of 1958, Zamir wrote: "facing the wave of foreign, jazz, and light songs, that floods the public every day, every place where the sound of the radio or the record is being heard, Hebrew folksong groups shall stand and keep guard, all across the land. Maintaining the flame of the Hebrew folksong, which binds together the bible, fields, tribes, nature, youth, and in which nationality is inseparable from its content and sounds."

Prior to the 1948 Arab-Israeli War, Zamir toured Arab villages together with a group of students from the Hebrew University in Jerusalem. His encounters during these tours aroused in him the connection to the Arabic melody, which he perceived as part of the cultural foundation of his country. He was overtaken by the Debka dance, immersed himself in its rhythm, meter, intricate changes, and the determination of this music. A well known example of this is the song Debkat Hahhamor (The Donkey Debka), which originates in an Arab song he heard in an Arab village during one of his shows. The chorus of the song is an Arab saying, sung in Arabic, which translates, "they asked a donkey, 'where to?' and he replied, 'to cut wood, and bring water from the spring." (see sound examples).

In 1953, Zamir met Sarahleh Grodzinski, and the two were married in 1956. The couple and had a son, Zalman (who later changed his name to Nir).

Emanuel Zamir was a unique figure in the field of Hebrew Folksong (Zemer Ivri). He was born in Petakh Tikva, to parents...

For one voice, with chordal accompaniment. Songs of various poets, Hebrew lyrics under the notes and separately.