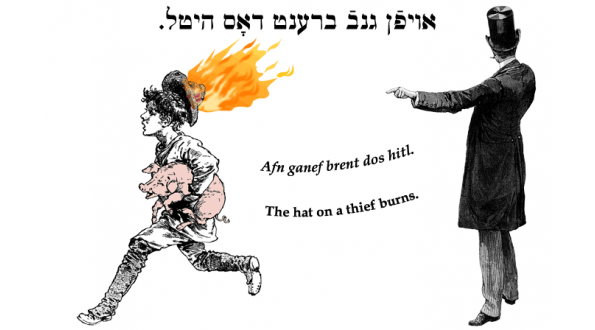 A Gneyve - A Yiddish Song of Theft and Poverty

This song of the month is a humorous Yiddish song about a robbery. It is also known as “Bay Mein Rebbe iz Gevezn,” as well as “Oy Gevalt a Ganev” and “Khapt Im Nemt Im,” with the latter two being the names of a second version with slightly different lyrics and a completely different melody. "A Gneyve" is part of a large repertoire of Yiddish songs addressing the hardships of a poverty ridden life that include songs that bemoan the troubles of the poor, as well as the unseemly life of the urban underworld. Ruth Rubin points out how harsh living conditions created a number of songs about poverty and how the Jewish community “dealt with economic problems on the simplest level, often on the most personal terms. Some were grim and despondent, others were tinged with satire” (Rubin, 1963: 279). Rubin also addresses this specific song, which she uses as an example of how “nonsense songs laugh at poverty, but there is a wryness to them” (Rubin, 1976: 77).

"A Gneyve" is about a robbery that occurs at a rabbi's house. It opens with a refrain disclosing that the rabbi has been robbed, and the stanzas which follow list what was stolen from him. However, it quickly becomes clear that what was stolen is of no value: “Seven fancy shirts like moles, three with patches, four with holes.... Seven rooster-hens like kings, three no heads and four no wings” (translation from Rubin, 1976). The first three stanzas, while humorous, show how the rabbi lived in poverty. Besides telling the story of a robbery this song could therefore be a roundabout way of showing the righteousness and meekness of the rabbi. The final stanza of the song, however, also mentions that “seven pretty girls like plums, three no teeth and four no gums” (Rubin, 1976: 131) were stolen from him. It is not clear if this is a degrading reference to the rabbi's daughters or if he was in fact involved in unseemly behavior, which would transform the song into a critique of the rabbi.

Ginsburg and Marek published this song for the first time in their notable 1901 collection of Yiddish songs (1991). They included only two stanzas but later publications featured between three to nine stanzas. One of the most complete versions of this song (nine stanzas) appeared in Yehuda Leib Cohen's Yiddishe Folkslieder mit Melodien (1957), where the text appears without a melody. A few of the stanzas are almost identical to those found in earlier publications. One finds references to a house without a roof, a sukkah without skhakh (traditional covering of the roof of the sukkah in the Festival of the Tabernacles), a mirror without glass and a wife without a nose. However, while the rabbi's shabby possessions are listed, in Cohen’s version there is no mention of any robbery.

There are two variants to the song's melody. A.Z. Idelsohn published both in the ninth volume of his Thesaurus of Hebrew Oriental Melodies (1932), which is dedicated to Yiddish song (example 1). Both are in a major mode; the second one is simpler in regards to contour as well as rhythm. Except for the leap of a fourth in the opening phrase, both melodies feature simple stepwise progression. Additionally, except for the cadences, the rhythm of the melodies progresses in eighth notes. The second variant is the one more commonly recorded. Publications of this version and its melody can also be found, among others. in Brounoff (1911, with piano accompaniment), Dobrushin-Yuditski (1940), Gelbart (1945) and Rubin (1976). It was recorded several times, including by Chava Alberstein for her 1969 album of Yiddish songs Margaritkelech. Here one can hear an instrumental rendition of the melody, arranged by Yohanan Zarai and released in 1953 (NSA K-06888).

There is an additional version of "A Gneyve" that has a completely different melody, but maintains a similar lyrical structure and theme (example 2). Here, however, there is a slight change in the lyrics. In the versions discussed above, the narrator relates the story about the rabbi whose house was ransacked. In this second version, the narrator speaks in first person, desperately crying out for help after the robbery. This is emphasized through the added lines that begin every stanza: “khapt im, nempt im, zetst im arayn, efsher vet er zich moide zayn.” This translates to “grab him, catch him, sit him down so that he will confess.” Another variant of this second melody changes the last line to “er zol kein ganev mer nit zayn" -- “so that he will not be able to steal anymore.” This line also moves the action into the present, as someone is just finding out about the robbery and shouting to passersby to help him. Actor and folk singer Theodore Bikel during a live performance humorously equated this song with the Jewish equivalent of calling the police, saying, “This is all about a burglar, other people have a police force, we sing songs.”

Other than this addition, the stolen objects listed in this second version are nearly identical to those in the first version. On the other hand, the melody of this second version, as published by Beregovski in his 1962 collection, is quite different. While the first version of the song has a simple melodic structure in a major key with a steady rhythm progression of eighth notes, the second version’s scale is an altered Dorian, which, according to Beregovski's terminology, refers to the Dorian mode with the fourth degree raised by half-step.

This second version begins with the introductory “khapt im, nempt im” line. The music to this opening section is more dense than in the rest of the song, as the melody goes back and forth from E to C (in Beregovski's transcription), alternating between one eighth note and two sixteenth notes. The melody of the following two lines rises up to G, the fifth of the mode, and goes back and forth between G and F#. Beregovski wrote that this section and “its melodic formulation create the impression that we are really dealing with someone who has suffered a burglary. […] The melodic line is weeping, imploring” (Beregovski, 563).

This section is followed by the refrain that has a wider range of a seventh. From this point onwards the melody is primarily comprised of eighth notes. After the refrain comes the stanza that lists the stolen objects. The melody of this section begins with a leap of a fourth that is repeated and followed by three measures in which the melody progresses in stepwise motion. This segment is followed by an additional refrain that begins with a leap of a seventh, where the narrator bemoans “oy gevalt a ganef” -- “Oh dear, a thief!”

Beregovski raises the possibility that in fact the song is not about a robbery. The character of the objects listed as stolen conceals, in his opinion, the possibility that the narrator made up the robbery, using it as a pretext to bring attention to the rabbi’s poverty. “The more we become aware of what was stolen, the more it is clear that the robbery was made up […] the hero of the song is just sarcastically mocking his own bitter poverty” (ibid). Beregovski also points out the connection between the song's theme and the musicality of the melody. In his view, the altered Dorian mode is sometimes used “to create the impression of lamentation for humorous purposes.”

Additional versions of the melody to this song can be found in Gideon (1923), which features an arrangement for two voices and piano accompaniment, and in Noy and Noy (1971). One of the earlier recordings of this song, from 1927, is by Isa Kremer (1887-1956) (musical example 1). A renowned singer, Kremer was born in Belz, Bessarabia, and sang on Italian and Russian opera stages. At the advice of the poet Haim Nahman Bialik, an acquaintance, she began singing Yiddish folk songs, becoming one of the first female performers to sing them on the stage. She was widely popular in Europe and later in the United States, where she moved after some anti-Semitic incidents surrounding her concerts. She eventually settled in Argentina, where she died in 1956.

Her pathos-filled recording of "A Gneyve" brings the turmoil in the lyrics to life. The recording opens with an instrumental interlude based on the melody of the refrain. She then sings the song’s introductory passage (“Khapt im, un bindt im”; “Catch him and bind him”) quickly and rhythmically, followed by the refrain. The stanzas in which she lists the stolen objects sound calmer and sadder, as the rhythm is steadier, while she carefully recounts each stolen item. The melody of her recorded version is very similar to the one in Beregovski's collection.

The Israeli klezmer band ‘Oy Division’ also recorded this song on their 2007 self-titled album (musical example 2). Their liner notes state that they based their performance on Kremer’s recording. Listening to this modern version, one can hear that the structure of the song is identical to Kremer’s and that Oy Division vocalist Noam Inbar, along with guest singer Avishay Fish, adopt vocal inflections similar to Kremer’s. Differences between the recordings are limited to performance style, i.e. instrumentation, embellishments, and the overall rock oriented performance by the ensemble. Despite these differences, both performances successfully express the ambiguous sense of combined panic and humor that lies at the core of this Yiddish song.

Gideon, Henry Louis and Constance Ramsay Gideon. 1923. From the Cradle to the Chupe: Songs of Jewish Life. Boston: A.P. Schmidt.

Rubin, Ruth. 1963. Voices of a People: The Story of Yiddish Folksong. Philedelphia: The Jewish Publication Society of America. 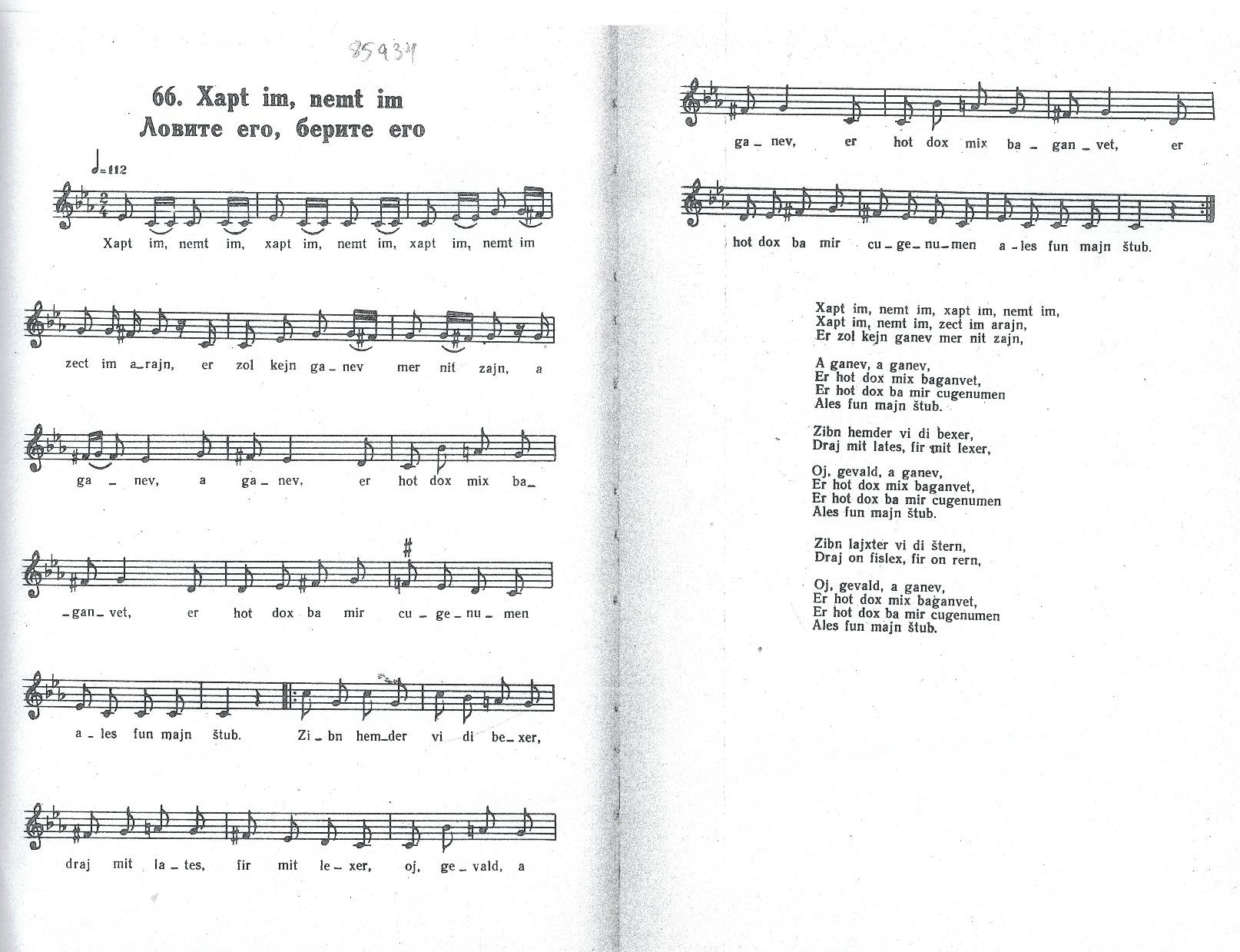