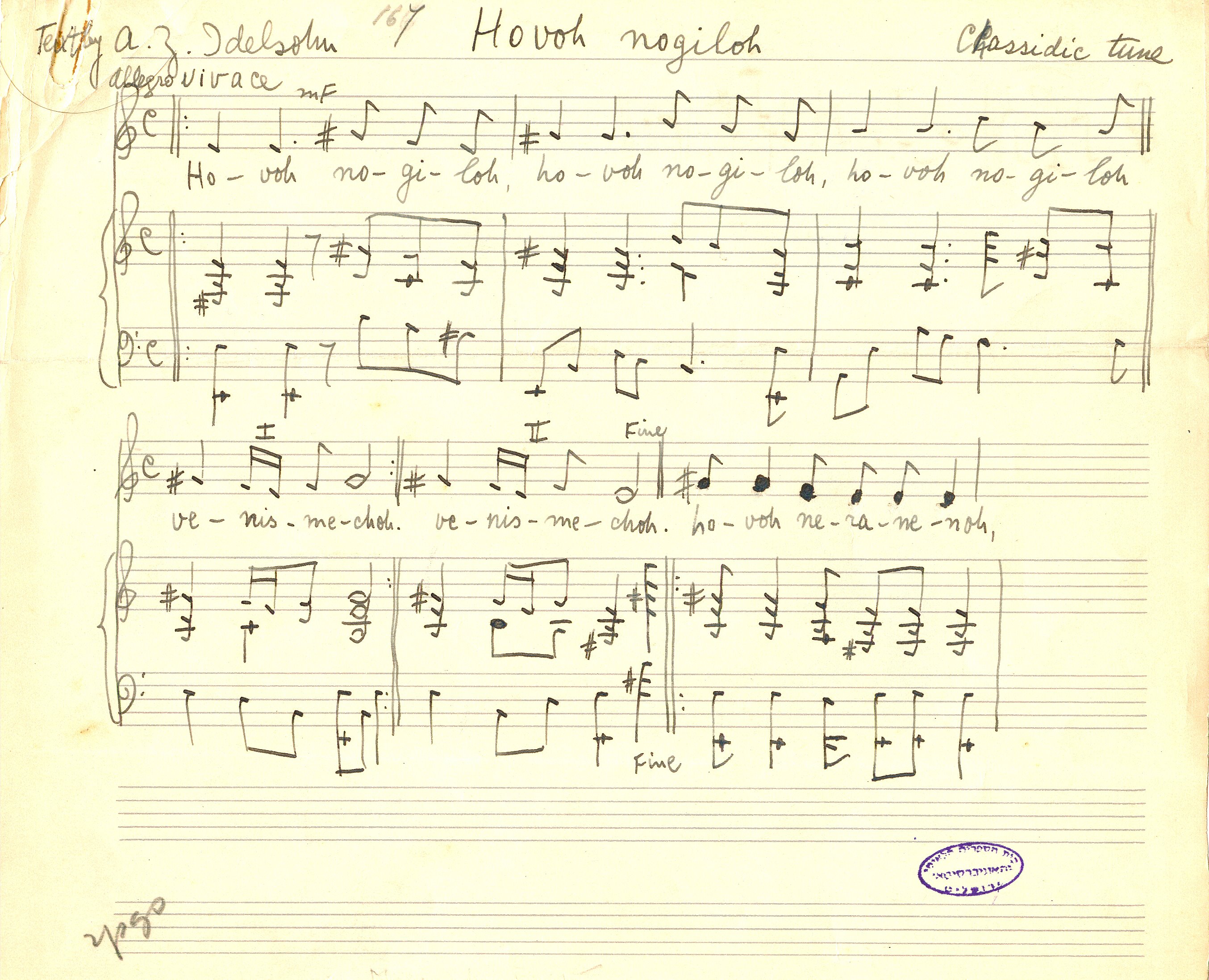 This manuscript is Idelsohn's sketch of the song Hava Nagila arranged for voice and piano. In the top right corner of the sketch, Idelsohn attributes the melody to a Hasidic niggun. The exact source of the niggun is not noted, but according to Idelsohn’s documentation in HOM volumes IX (p. 200) and X (p. 42), it was collected from a descendant of the Sadigora Hasidic court residing in Jerusalem. The Sadigorer Hasidim took their name from the small town of Sadigora in Bukovina (present-day Ukraine), where the Rizhiner Rebbe, Reb Yisroel Friedman (1798-1850), settled from Russia and established his court in 1845. In 1988, head JMRC researcher Yakov Mazor conducted an interview with Akiva Zalman Brilant, an Israeli Boyan Hassid, on the topic of Hasidic niggunim and early Zionist pioneer songs. In the interview, Brilant speaks about the musical traditions of both the Boyan and Sadigorer communities, who were settled in the same general area and both loyal to Reb Friedman. He notes the transmission of many Sadigora niggunim brought by early Zionist pioneers to Palestine, including Hava Nagila. Brilant asserts that the majority of Sadigora immigrants settled in the Kiryat Anavim area outside of Jerusalem, but does not provide a timeline for the major waves of immigration. We do know that there was a strong fiscal connection between the Sadigora court and members of the community settled in Palestine. For example, in 1870 Rabbi Israel Friedman helped Nisan Bak, a Sadigura Hassid settled in Palestine, to purchase a plot of land by the Western Wall to build the synagogue Tiferet Israel. Therefore, it stands to reason that by 1915 Idelsohn could have developed contact with descendants of the Sadigora court settled in the Jerusalem area in order to collect and record their niggunim. While the exact date of composition is not documented in any of Idelsohn’s manuscripts, he claims to have written a first sketch of Hava Nagila in 1915. He also documents the first performance of the song by his mixed choir in 1918, remarking that the performance caused Hava Nagila to, “quickly spread throughout the country.” Idelsohn’s account of these dates is included in his article "Musical Characteristics of East-European Folk song" published in The Musical Quarterly 18, no. 4, pp. 634-645 in 1932 (see entry #1678). Idelsohn’s Hebrew text echoes the biblical verse: "This is the day that God has made. We will rejoice and be glad in it" – "Ze ha-yom asah adonai, nagila ve-nismeha bo" (Psalms 118:24). Some speculate that the song was composed to celebrate one of two important events: The Balfour Declaration on November 2, 1917, or the British victory in Palestine at the end of World War I. The above manuscript is part of the Idelsohn Collection at the Department of Music of the Jewish National and University Library.