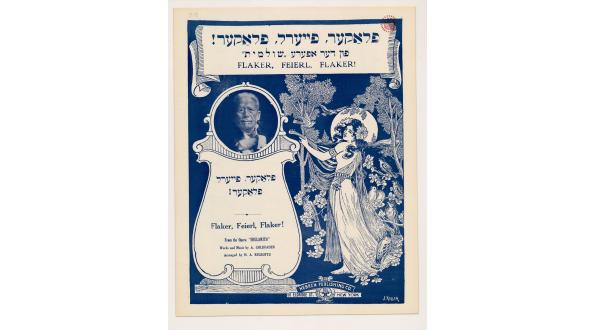 Haynt Iz Purim, Brider (‘Today is Purim, Brothers’) is one of the most familiar songs in the American Yiddish repertoire for Purim. It has appeared in many American Jewish songsters at least since Samuel E. Goldfarb’s Hamenagen[1] (1925). The song in both Yiddish and Hebrew (the latter language is important as we shall see below) was then reprinted from Goldfarb’s in several widely disseminated American Hebrew-Yiddish songsters published by Harry Coopersmith and others. The sources of the text and music of this famous Purim song are multiple; studying them shows the complex process through which modern favorites in the Jewish repertoire were constructed only in the course of the past two or three generations.

The formula ‘Haynt iz purim brider’ is found as an opening for many traditional Purim songs. The phrase is usually used to accompany the common appeal for money at the end of a traditional Purimshpil with lyrics such as ‘Haynt iz purim, morgn iz oys, git undz a por groshn un varft undz aroys’ (Today is Purim, tomorrow is over, give us a few cents and send us away).

However, the text of the song ‘Haynt iz purim brider’ that is known today has an author, the Vilna-born Yiddish poet Mordekhai (Mark) Rivesman (1868-1924, left) and is attributed to a composer, Abraham Goldfaden. Rivesman’s song was published for the first time in Saint Petersburg in 1912 in the epoch-making songster Lider zamelbukh far der yidisher shul un familiye, edited by Sussman Kisselgof (1876-1939). In this publication, Kisselgof and his colleagues attempted to provide modern Jewish families with educational songs for all the holidays. However, the fact that Rivesman, an assiduous collaborator of Kisselgof's, had to write a new text (based as we pointed out on traditional formulae) shows that the folk tradition in Yiddish lacked family songs for Purim. Otherwise, the editors of the zamelbukh would have chosen a traditional song as they tried to do in relation to other holidays. P. Lwow is credited in the zamelbukh with the arrangement of the song for four voice choir (SSAA) and piano. As time passed and the zamelbukh spread, the song was folklorized, as attested to by its 1932 appearance in Abraham Zvi Idelsohn’s Der Volksgesang der osteuropäischen Juden.[2]

As noticed above, the tune selected by the editors of the zamelbukh to Rivesman’s poem is attributed in the score to the playwright, composer and impresario Abraham Goldfaden (right), for many the “founder” of modern Yiddish theatre. Indeed, the melody appears for the first time, with different words of course, in Goldfaden’s play Shulamit (1880) as ‘Flaker, Feirel, Flaker’ (Burn, fire, burn), the final chorus of the third act of this operetta. It is hard to asses to what extent this is an original musical composition by Goldfaden or just an adaptation of a Yiddish folk tune (or even two tunes) that he borrowed for this play, as was the standard practice in the early Yiddish theater.

‘Flaker, Feirel, Flaker’ crossed the ocean rapidly, and Shulamith became a favorite piece of the Yiddish repertoire in America. In 1913 the Hebrew Publishing Co. of New York City published the score, arranged by Henry Russotto under the English title ‘Shepherds’ Song.’ The two sections of the melody appear as two separate items (nos. 21 and 22) in the theater play. Unlike the rather gay tune (Allegretto) of the widespread Purim song that became popular following the zamelbukh, the melody in Goldfaden’s version is slower (Andante), dramatic, and its second section is in 3/4 (tenuously kept in Rivesman’s adaptation as triplets in a 2/4 meter).

But Kisselgof’s zamelbukh also quickly crossed the ocean, and thus the same tune had, as we have noticed, another line of transmission in American Jewish songsters which reproduced Rivesman’s version, starting from Goldfarb, as mentioned at the beginning of this article. Goldfarb’s version is clearly taken from the zamelbukh, except that it is transposed to a minor third lower and omits the choral arrangement, leaving only the soprano part. Goldfarb credits Goldfaden with the music but defines the song as “folk,” thus erasing the name of Rivesman as the author. Recordings from the Ruth Rubin and Jacob Michael collections in the Sound Archives of the National Library of Israel are a testimony to the presence of Rivesman’s song as a folksong in the American Yiddish Purim repertoire, regardless of the formal arrangements published in songsters.

In Israel this Purim song and its melody had a different story. Goldfaden’s Shulamith arrived in Palestine and was translated into Hebrew as early as 1900. Later on, in the early 1920s, Kadish Yehuda (Leib) Silman translated Goldfaden’s song ‘Flaker, Feirel, Flaker’ into Hebrew. The tune thus became known in Israel, and other Hebrew song texts were adapted to it. The Yiddish song by Rivesman was less present in Israel than in America. Yet, Rivesman’s song was translated into Hebrew as ‘Zeh hayom yom Purim.’ This translation is attributed by the website Zemereshet to A. Persky, but we could not confirm this assertion. The song was circulating in Hebrew also in America already in 1925, as we have seen. Moreover, the melody appears, without text, under the title ‘Hayom Purim ahi’ (‘Today is Purim, brother,’ a paraphrase of Rivesman’s opening) in the booklet Zmanim ve-hagim le-halilit (Festivals and holidays’ [songs] for the Recorder) published by Abraham Omer.[3]

Besides America and Israel, the song continued to live in Europe. It appears for example in a choral arrangement in the collection Hazomirs lider-bukh (Copenhagen, 1937) and in Emil Săculet, Shirei ‘am yehudim – Yidishe Folkslider, (originally printed in Bucharest: Muzik-Farlag fun dem Kompozitorn-Farband fun der R.F.R, 1959, and reprinted with Hebrew translations, Tel Aviv, 1971).

Finally, the tune reappeared in the reworking of Goldfaden’s 1887 play Der Fanatik oder Di beyde Kunilemel[4] in the award winning 1966 Israeli film Shnei Kuni Lemel, starring Mike Burstyn and directed by Israel Beker. The film originates in the Hebrew staging of Shenei Kuni Lemel of 1957 by the Do-Re-Mi theatre also directed by Beker. The translation of the text from Yiddish was prepared by Moshe Sachar. Shimon Cohen composed the original soundtrack for the 1966 film, which eventually found itself back on the stage as a successful musical in Israel and Broadway (as The Flying Matchmaker).

The soundtrack of the Israeli film includes songs from different sources, and the tune of our Purim song was included in this film. The Hebrew text set to the melody of ‘Flaker, Feirel, Flaker’ / ‘Haynt Iz Purim, Brider’ in Sheni Kuni Lemel is ‘Avu ‘ez la-tayish’ (‘Bring a goat to the billy goat’). The song is credited in the long-play containing the sound track of Shnei Kuni Lemel to Pessah and Mike Burstyn. Polish-born Pessah Burstyn (1896-1986), the father of Mike, was a renowned actor in the Yiddish theater of New York City. It is clear now how Goldfaden’s melody (or the anonymous folk melody on which it relies) found its way into ‘Avu ‘ez la-tayish’. The question whether Pessah had in mind Goldfaden’s song or the Yiddish Purim song by Rivesman is rhetorical, however, the music of ‘Avu ‘ez la-tayish’ (especially the B section in 2/4 as in the Purim song) and its hilarious comic context point to the direction of Rivesman’s song.

A recording by contemporary artist Cindy Paley can be heard here.

The soundtrack from the film Shnei Kuni Lemel can be heard here. The melody under discussion in this article is track number six.

European group 'The Klezmer Alliance' recorded the song in their mini Purimspiel, which can be heard here.

[3] This information relies on the website www.zemereshet.org.il and could not be verified by JMRC researchers.

See part II of our research on this song here.

Suite of Purim songs for orchestra arranged by Hanan (Hans) Schlesinger (1893-1976). 'Heynt iz Purim brider' is the third song in the suite (at 1:42). Unreleased broadcasting 33 rpm record from the Kol Israel collection, recorded on March 21, 1951. Sound Archives, National Library of Israel, K 06539A (on the label of the record 'Heynt iz Purim brider' is called 'Hayom Purim').

'Haynt iz Purim,' Daniel Kempin accompanied by Dmitry Reznik, track 10 from the album Benkshaft, Melisma B00000DCX2, 1998. Sound Archive, National Library of Israel, CD 2091. This is an example of the presence of the Purim song in the Yiddish song revival in Germany. 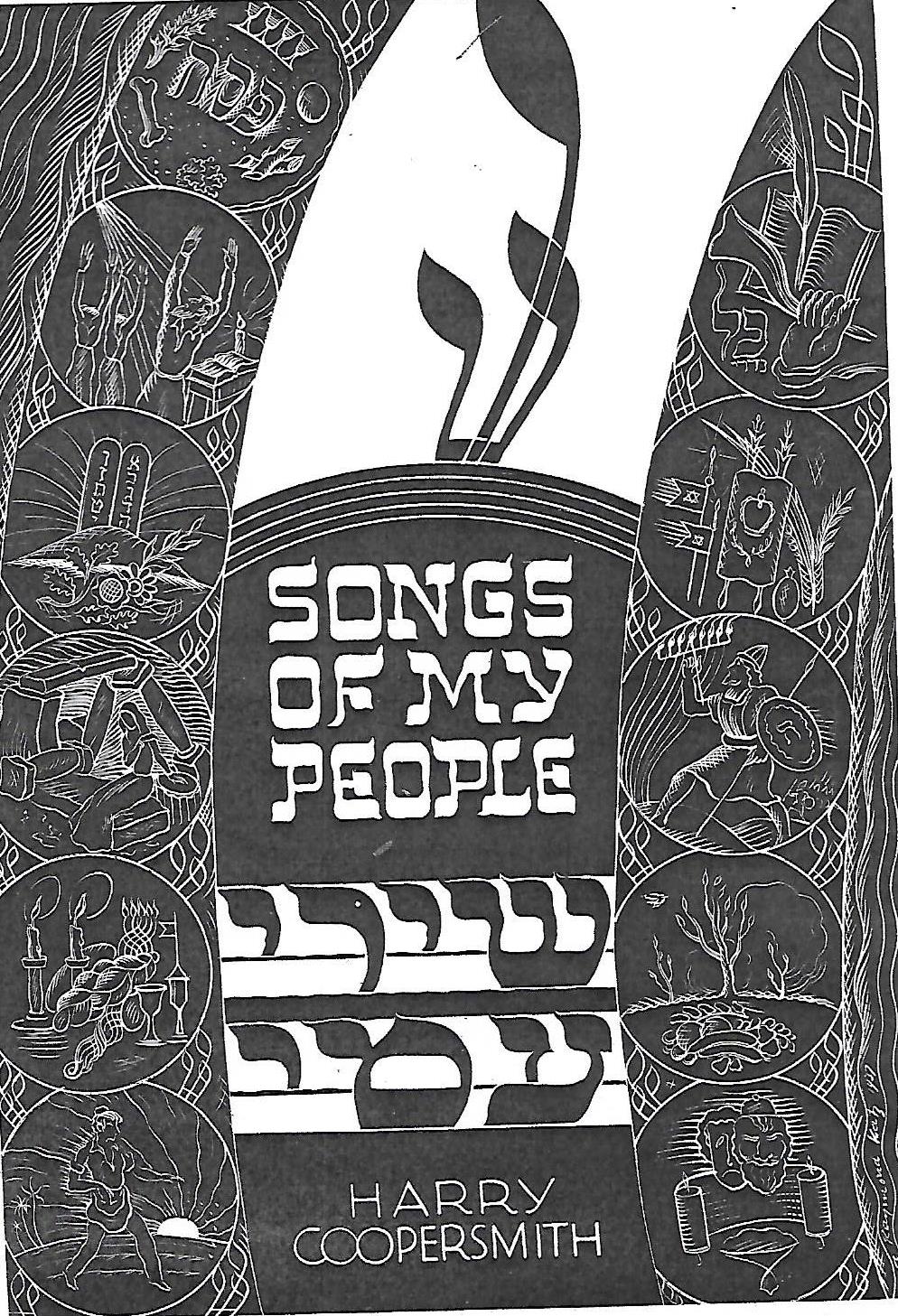 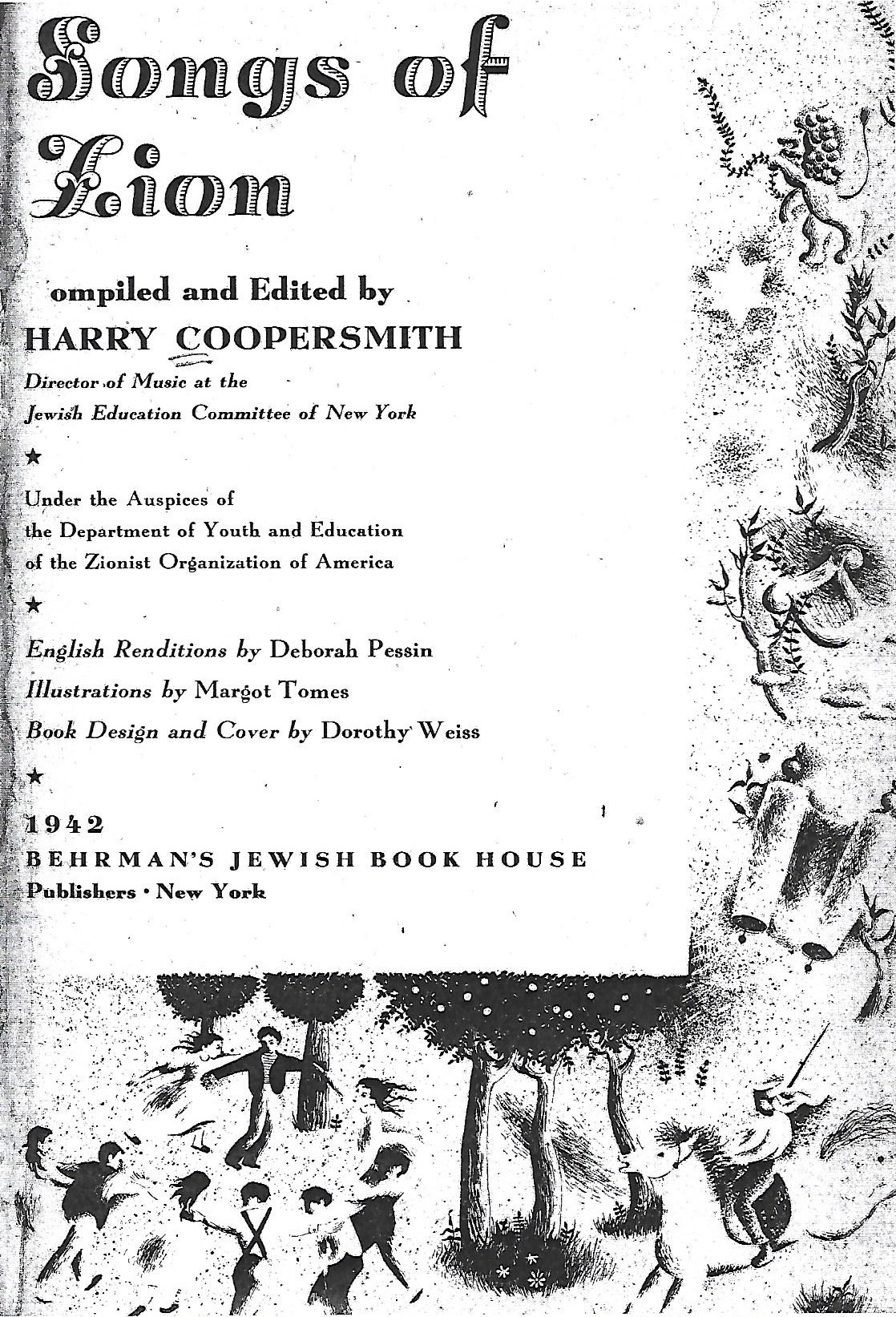 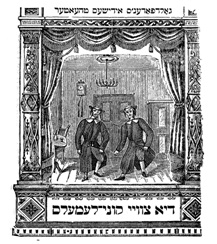 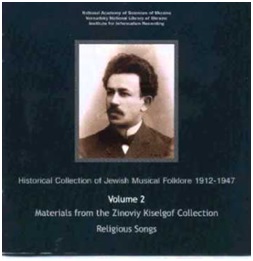 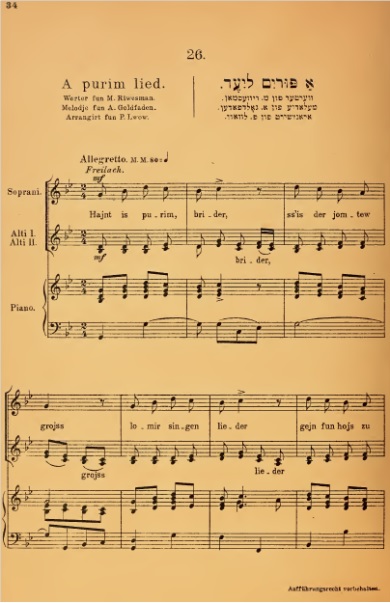 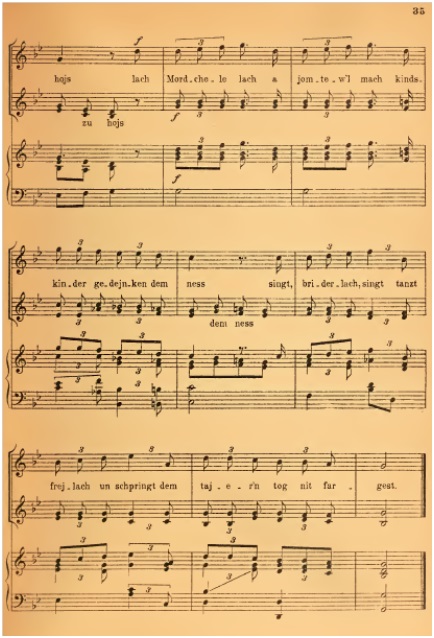 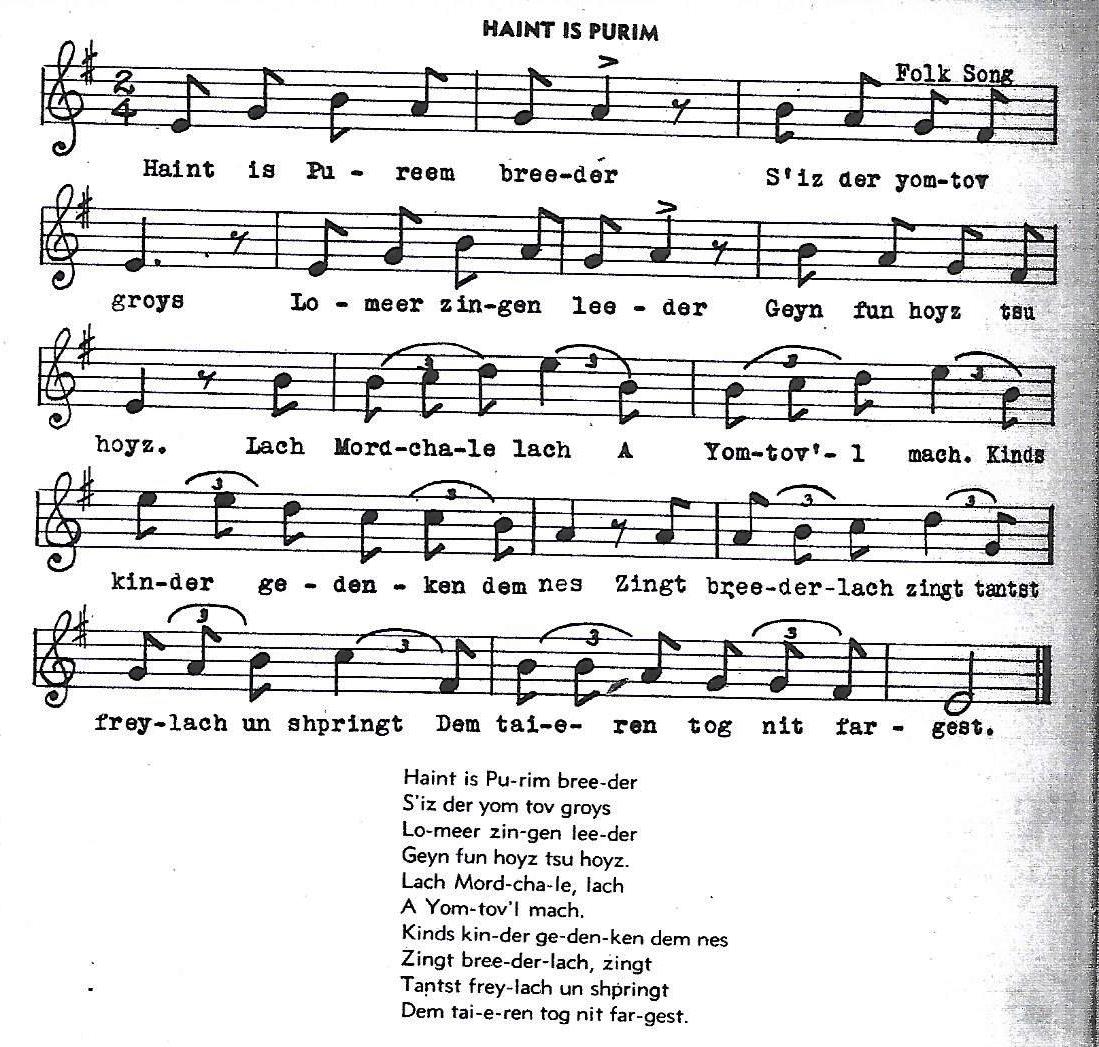 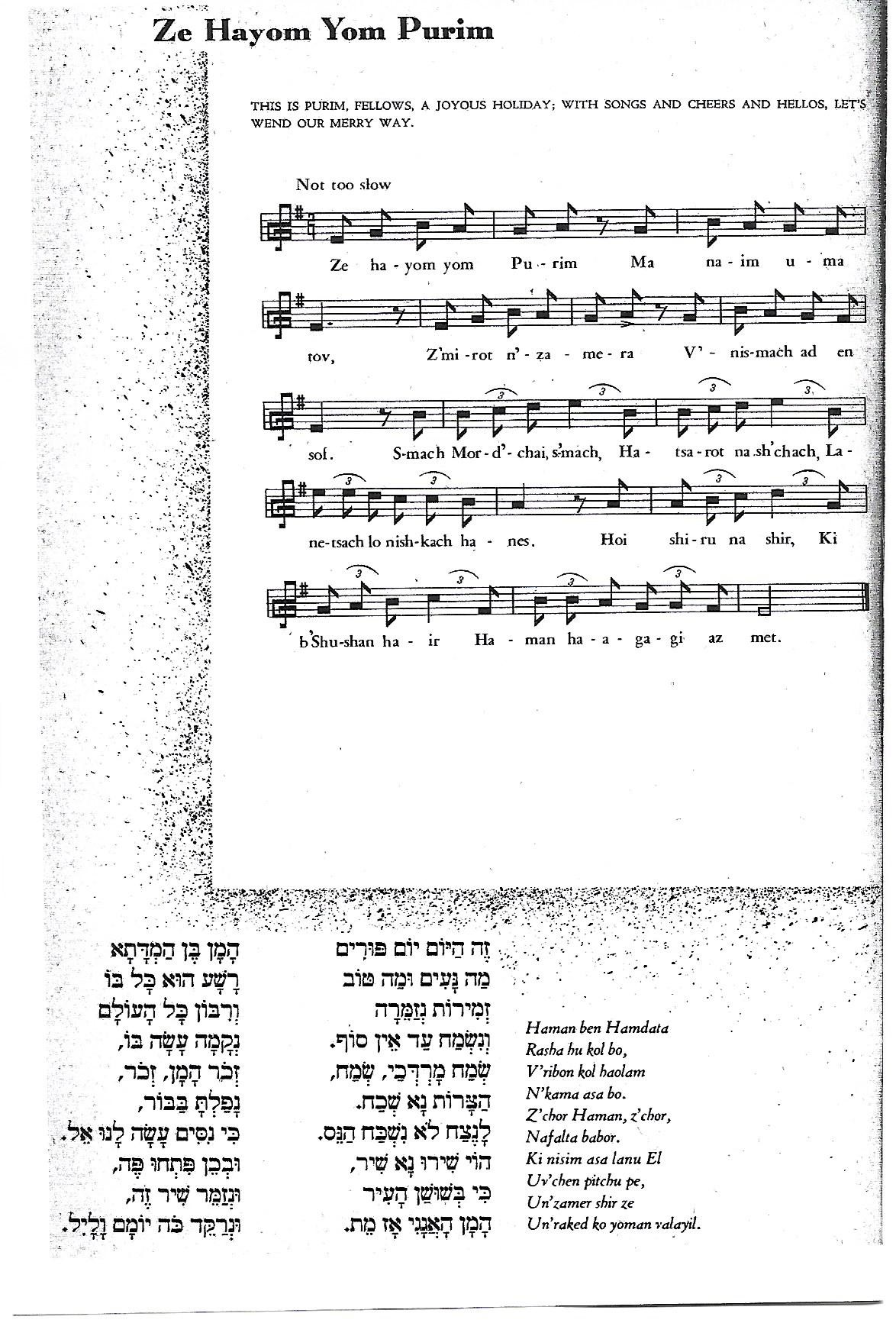 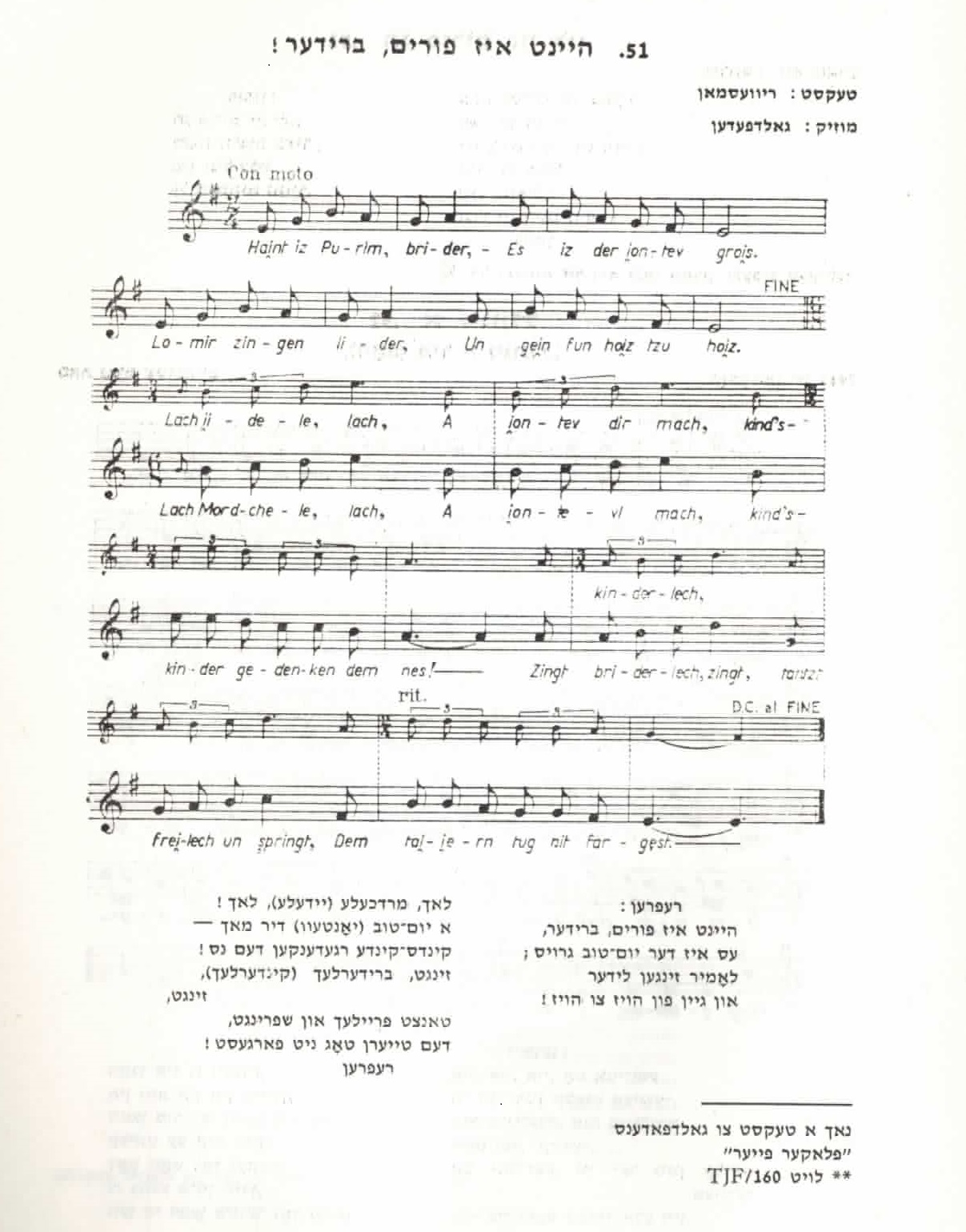 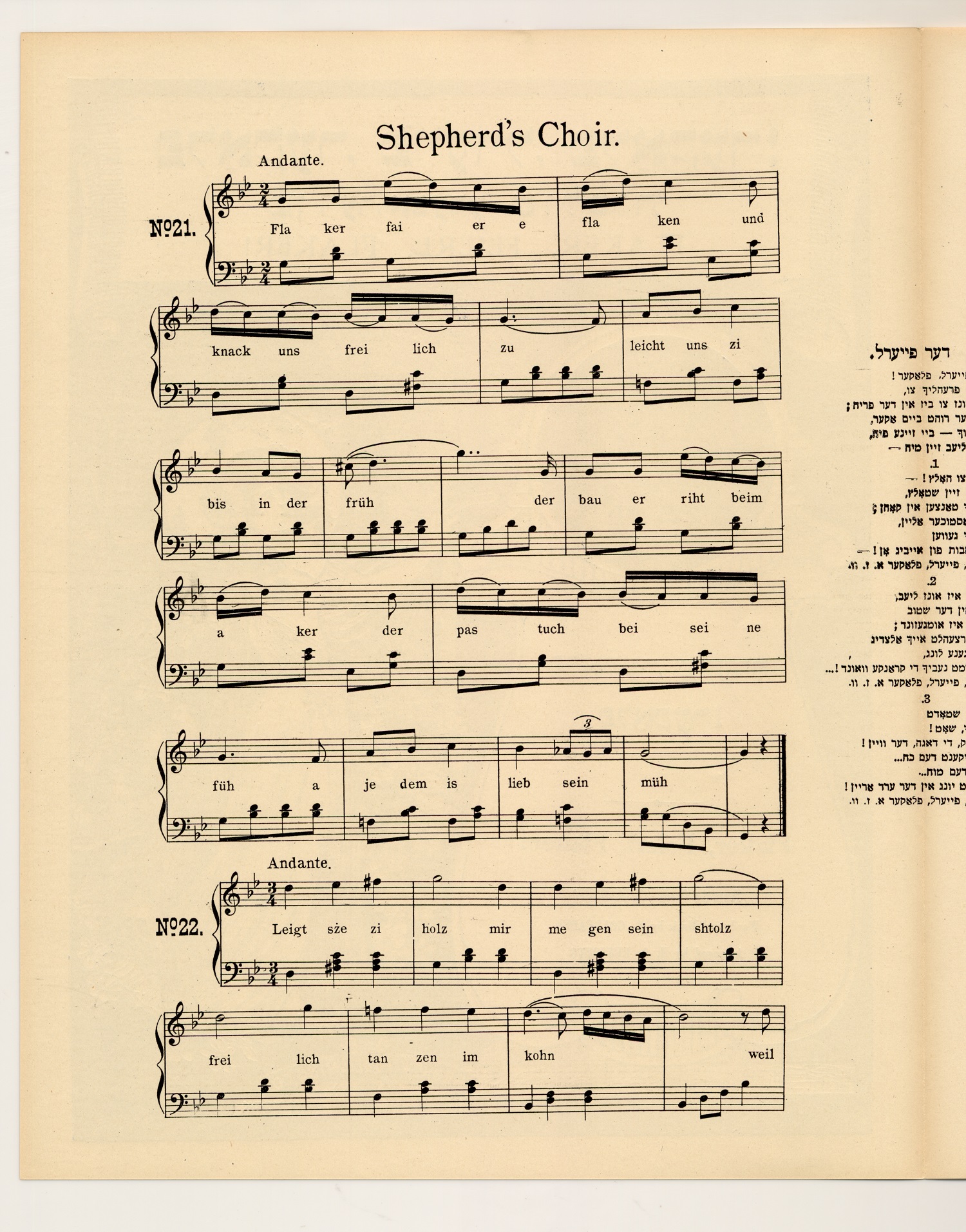 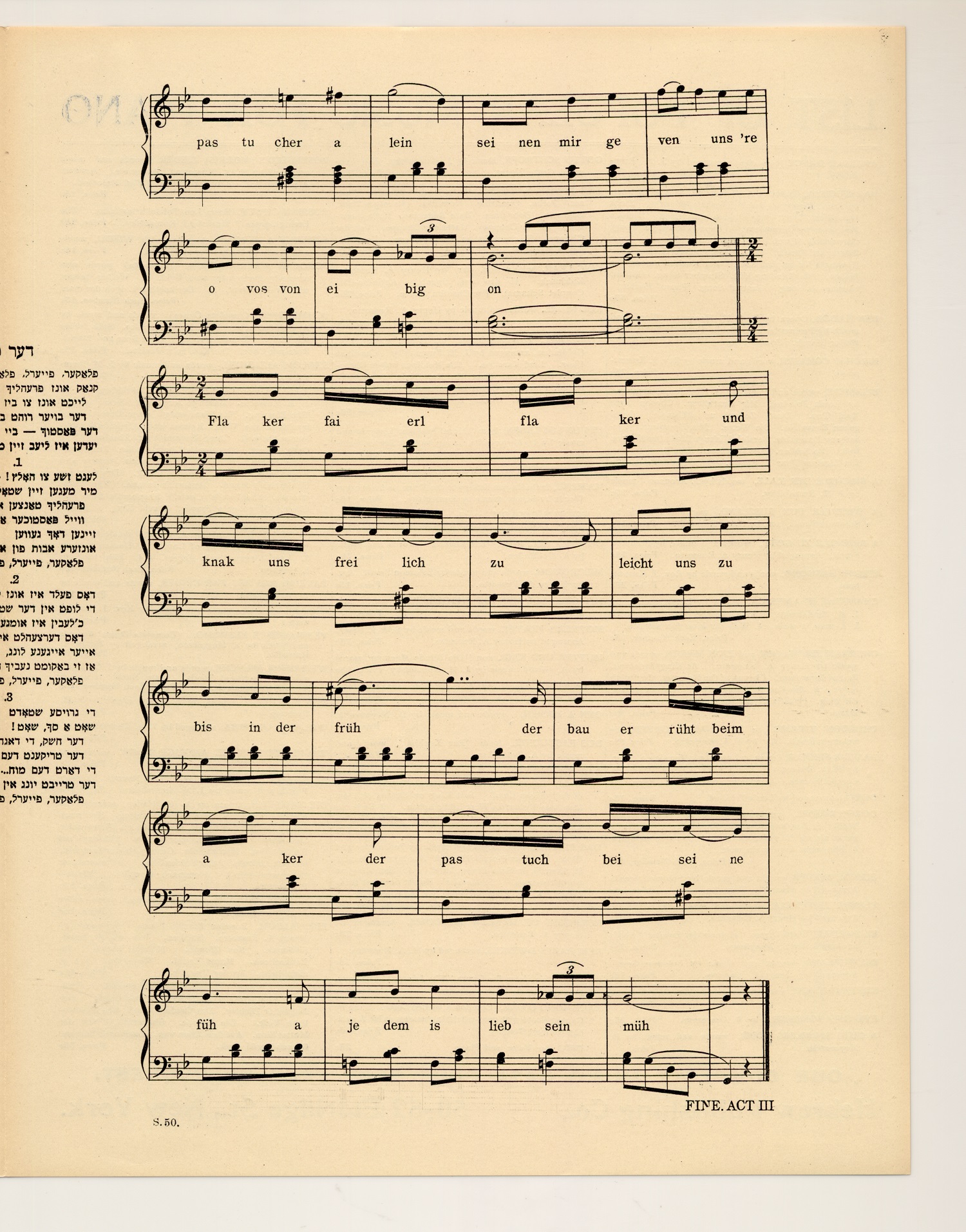