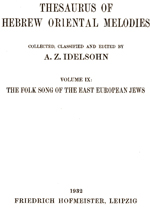 This volume of HOM was also published in German. HOM Vol IX contains Jewish folk songs in Hebrew, Yiddish, Russian, and Ukranian. Each song is printed with text-underlay for the first stanza. Idelsohn's plan to publish the full texts with translation and commentary in a seperate volume was never materialized. This collection differs from other anthologies of East-European Jewish folk songs, in that the emphasis is on the structure of the music instead of the text. Musical considerations shaped Idelsohn's classification and order of presentation of the songs documented in Vol. IX. Idelsohn writes in the introduction: "The method here pursued divides the songs primarily according to scale (minor, major etc.) and subdivides them following the various predominant characteristics within the scale." This method of classification often makes it difficult to find specific songs, therefore Idelsohn includes an alphabetical list of the texts at the beginning of the volume, in lieu of a table of contents. The songs included in this volume were drawn form two primary sources: informants who sang for Idelsohn, and printed collections of Jewish songs. 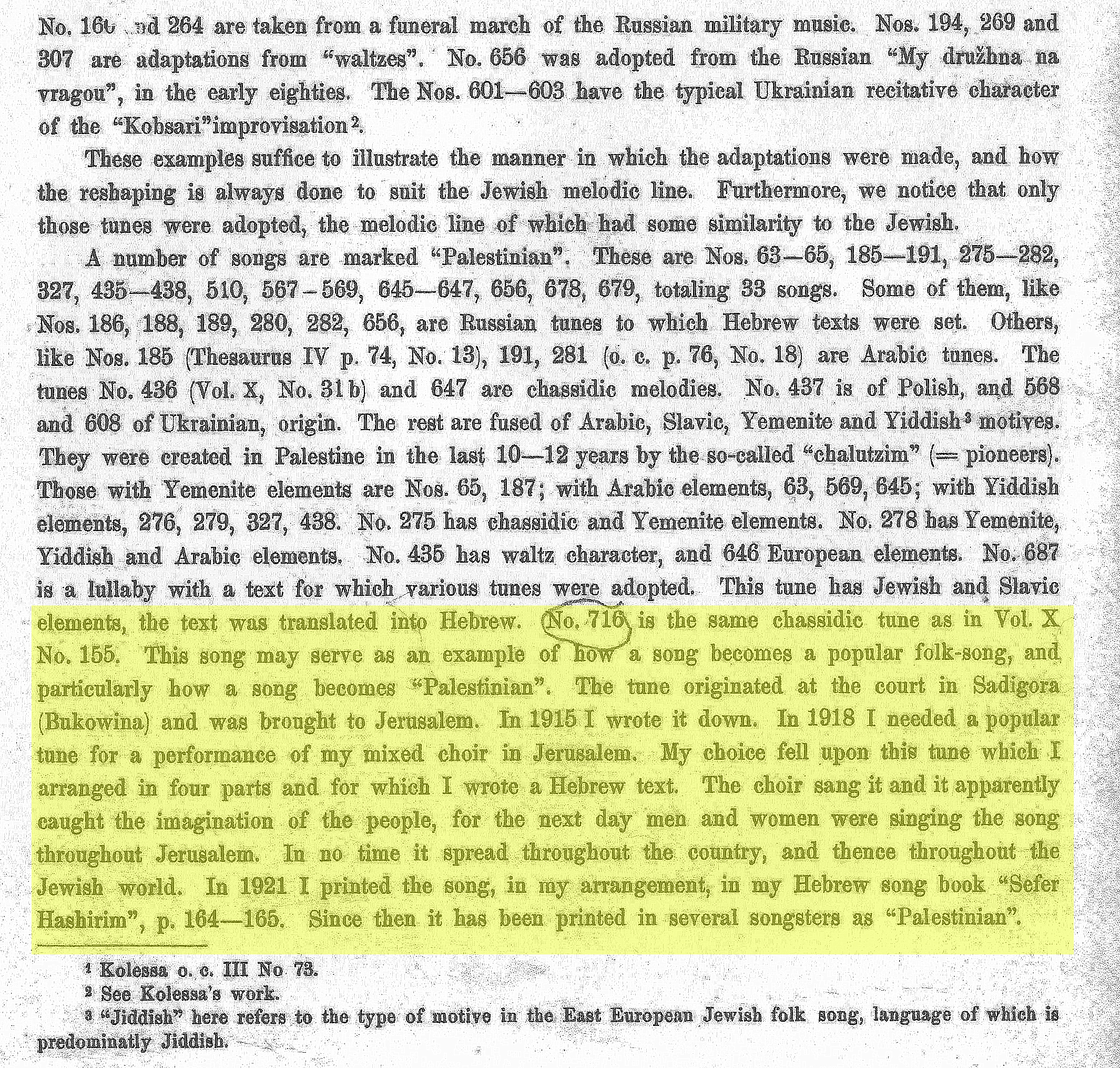 This excerpt is taken from Idelsohn's Thesaurus of Hebrew Oriental Melodies, Vol. IX on the folk songs of Eastern European Jews. As noted earlier, Idelsohn collected the melody utilized in Hava Nagila from a descendant of the Hasidic court in Sadigora (a small town located in present day Ukraine) residing in Jerusalem. He explicitly claims authorship of the Hebrew lyrics and explains the process by which Hava Nagila became a popular Palestinian folk tune. The excerpt reads: No. 716 is the same Chassidic tune as in Vol. X No. 155. This song may serve as an example of how a song becomes a popular folk song, and particularly how a song becomes “Palestinian.” The tune originated at the court in Sadigora (Bukowina) and was brought to Jerusalem. In 1915, I wrote it down. In 1918 I needed a popular tune for a performance of my mixed choir in Jerusalem. My choice fell upon this tune which I arranged in four parts and for which I wrote a Hebrew text. The choir sang it and it apparently caught the imagination of the people, for the next day men and women were singing the song throughout Jerusalem. In no time it spread throughout the country, and thence throughout the Jewish world. In 1921 [songster was published in 1922] I printed the song, in my arrangement, in my Hebrew song book “Sefer Hashirim,” p.164-165. Since then it has been printed in several songsters as “Palestinian.” 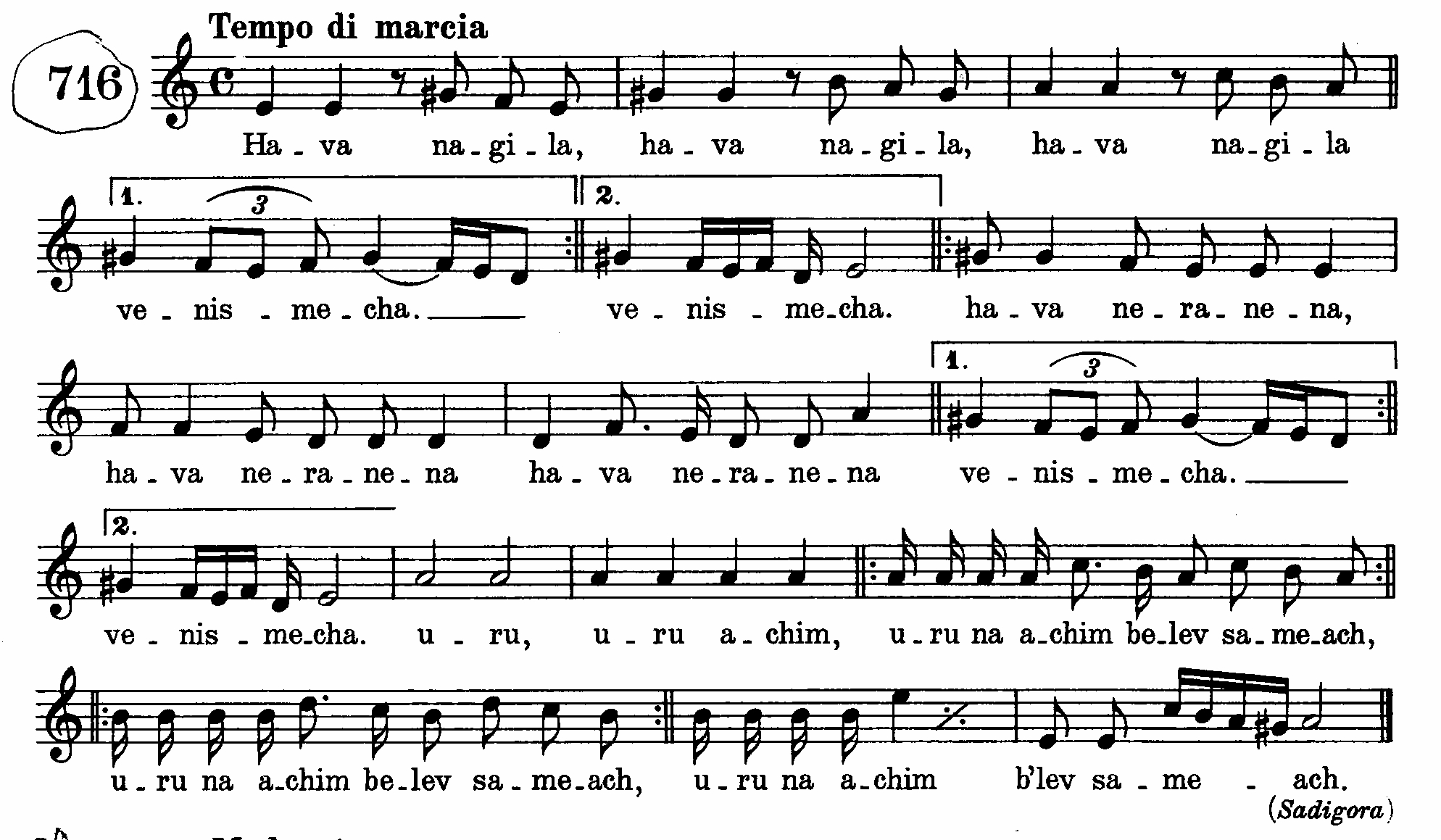 This is an image of a score of Hava Nagila (song #716) found in the ninth volume of the Thesaurus of Hebrew Oriental Melodies. In the bottom right corner of the notation, Idelsohn marks the origin of the recorded melody (Sadigora [Hasidic Court]). 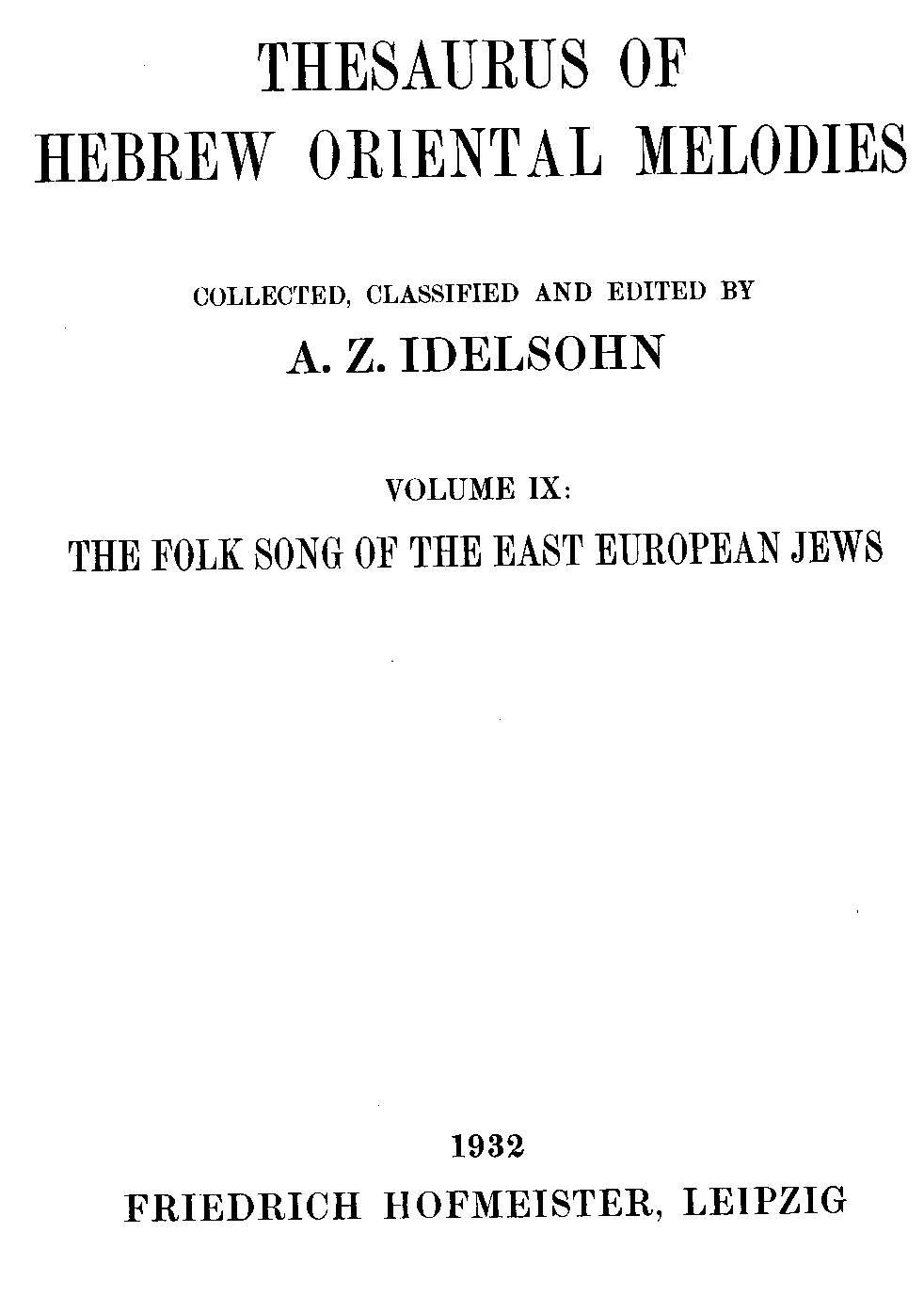 In 1924, A.Z. Idelsohn was contracted to catalog the Eduard Birnbaum collection of Jewish Music at the Hebrew Union College (hereby HUC) in Cincinnati. Shortly thereafter, he was appointed professor of Jewish music and liturgy at HUC, a position he held until his health began to deteriorate in 1934. With access to the Birnbaum collection, A.Z. Idelsohn wrote extensively on the historical development of Jewish musical cultures. During his time at HUC, he published the last five volumes of the Thesaurus of Hebrew Oriental Melodies, which he devoted to the musical traditions of Ashkenazi Jewry. A.Z. Idelsohn relied heavily on Birnbaum's collection, as well as other resources housed in the HUC library, to complete the last five volumes of HOM. The following image is the title page of Idelsohn's ninth volume, published in 1932. This volume focuses primarily on the folk song traditions of Eastern European Jewry. 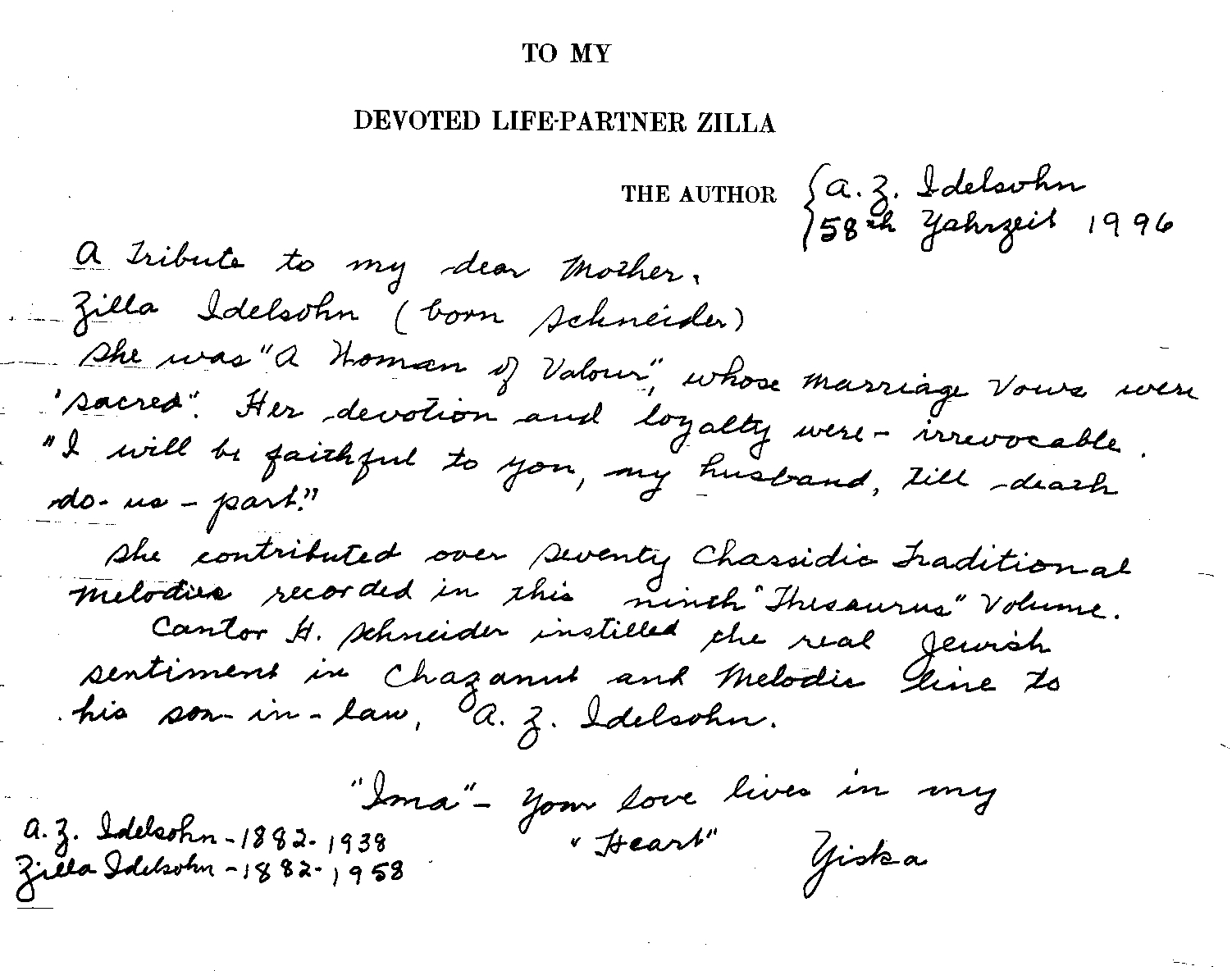 The image above is a handwritten note from Mrs. Yiska Schmaman, the daughter of A.Z Idelsohn (d. 2007), on the dedication page of a copy of the Thesaurus of Hebrew Oriental Melodies Vol. IX. In the note, Yiska writes that her mother, Zilla, contributed over seventy traditional Hasidic melodies to the HOM IX. Idelsohn did not document the name of his informant for the Sadigora niggun on which Hava Nagila was based. In light of the limited documentation, we can only speculate about the possibility that Idelsohn recorded the niggun from his wife, Zilla. Yiska Schmaman's note reads: A tribute to my dear Mother, Zilla Idelsohn (born Schneider [1882-1958]), she was “a woman of valor,” whose marriage vows were ‘sacred.’ Her devotion and loyalty were—irrevocable. “I will be faithful to you, my husband, till death-do-us-part." She contributed over seventy Chassidic traditional melodies recorded in this ninth “Thesaurus” volume. Cantor H. Schneider instilled the real Jewish sentiment in Chazzanut and melodic line to his son-in-law, A.Z Idelsohn [wording taken from Idelsohn's autobiographical sketch first published in the Jewish Music Journal 2, no.2 (1935): 8-11]. “Ima”—your love lives in my “heart.” Yiska.