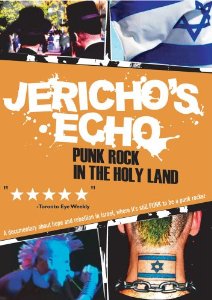 Jericho's Echo is a documentary film about the Israeli hardcore punk music scene. The film is comprised of interviews with Israeli punk bands who were active during the years of the second intifada, and features live footage of shows and stock footage of news broadcasts of images with people praying at the western wall and the skeletal remains of busses that had been blown up during different terrorist attacks. Through these different types of media, the film explores the connections between the bands, their music, and the cultural-political context of being a young Jewish musician during the second intifada.

During the course of the film many questions are raised, but only few are given definitive answers. Each band expresses their own individual outlook on their music, their political opinions, and their Jewish identity, and how they all connect. The film gives a special emphasis to the cultural context of Jewish punk bands in Israel during the second intifada, and less to discussing their actual music, which is varied: from straight up hardcore-punk (Nikmat Olalim, Va'adat Kishut) to pop punk (Useless I.D., Punkache) to ska-punk (Smash4$). On the other hand, as previously mentioned, the questions of politics and Jewish identity are given the foreground of this film. The spectrum of political views brought forth in this film is very broad. Most of the bands' views can be situated somewhere in the middle the extreme left wing position of Nikmat Olalim, four teenagers who sing about the Israeli occupation, and whose name is taken from a Jewish terrorist organization, and the right wing positions of The Retribution who talk about Israeli pride and fighting in the army.

Questions of Jewish identity also linger on the horizon throughout the film and a few of them are explicitly dealt with. What does it mean to be a Jewish musician? Can one be Jewish but not religious? Who decides who and what is Jewish?

Trailer to the film:

Jericho's Echo is a documentary film about the Israeli hardcore punk music scene. The film is comprised of interviews with Israeli punk bands...

Israel Rocks: A Journey Through Music of Visions and Divisions

The concert in Addis Ababa is not just another performance by the Idan Raichel Project, but a journey back to the homeland of two of the Project's lead singers, Cabra Casay and Avi Vograss...