Title:
Judeo-Caribbean Currents: Music of the Mikvé Israel-Emanuel Synagogue in Curaçao
20
Editor
Edwin Seroussi
Yuval Shaked
Arrangement
Raymond Goldstein
Publisher:
Jewish Music Research Centre, Hebrew University of Jerusalem
Material Type:
Recordings
Place of Publication:
Jerusalem, Israel
Year:
2009
Place of Recording:
Montreal,Canada and Jerusalem, Israel
Edition:
1
Series:
Anthology of Music Traditions in Israel
Volume:
22
Pages:
1 CD + Booklet
Recording Number:
AMTI 0901
Media:
CD
Languages:
Hebrew
Description:
Dramatic demographic and ideological shifts characterize the three and a half century saga of the small and yet prominent United Netherlands-Portuguese Congregation Mikvé Israel-Emanuel in Curaçao. Its liturgical music is a reflection of the rich historical path followed by this unique Sephardic community in the Caribbean. Interpreting the multifaceted repertoire that emerges from the selections in this CD entails the description of some key events in the history of this community. In telling this story, several conflicting memories converge into a multilayered musical narrative.
The small but prominent Jewish community of Curaçao had a notorious role in the musical affairs of the island. The two “Portuguese” synagogues of Curaçao were a focus for musical activities with many of the most distinguished local musicians, Jewish and non-Jewish, serving as performers and providing new compositions.
The manuscripts in the archive of the Curaçao synagogue include music for the entire liturgical order of Sabbaths and most especially for the High Holidays. They cover almost a century and a half of activities in both Mikvé Israel and Emanuel before and after the reunification of 1964. A majority of these sources consist of original settings by the local composers, as well as materials drawn from diverse Western European and American sources, attesting to the major impact that the process of modernization had on the music of the two nominally Portuguese synagogues on the island. We say nominally because few items from the Portuguese Jewish music tradition were preserved in the manuscripts.
The fragmentary character of the sources limited the selection to pieces that could be reconstructed in a reasonable manner. For practical purposes, it was decided to rearrange all the pieces, originally meant for cantor, various soloists, choir and organ, for voice and piano. Some pieces are reproduced literally in accordance to the original, but judicious editing and arranging was applied to others. 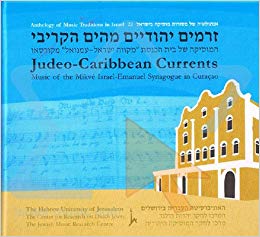 Composed by Pavel Slavensky who was born in 1909 as Pinchos Yaakov Freilich in Czechoslovakia. He was one of six children of a hassid from the Belzer court. After WWII, he served at various congregations in the USA, became the first permanent cantor of the Adat Shalom Synagogue in Northwest Detroit where he served until 1949 when he moved to Temple Sholem on Lake Shore Drive, Chicago. He was in Curaçao from 1971 to 1975 and edited a selection of transliterations of responses and hymns of the Sabbath service. One piece attributed to him, En kelohenu, was found in the archive.

Lekha dodi
Taken from one of the major anthologies of Curaçao’s Jewish liturgical music that was edited and annotated by Cantor Norman Swerling. In it appear a few Portuguese melodies that have not been traced back to the community’s musical archive but appeared in Swerling’s collection and were adopted by him from extant published anthologies in an attempt to perpetuate the Portuguese component of the liturgy as demanded from him by the Directiva of the congregation. A most apparent example is Lecha Dodi, which is almost identical to the one included in the important anthology of Hazzan David Aharon de Sola from Amsterdam and London.

Judeo-Caribbean Currents: Music of the Mikvé Israel-Emanuel Synagogue in Curaçao
Dramatic demographic and ideological shifts characterize the three and a half century saga of the small and yet prominent United Netherlands-Portuguese Congregation Mikvé Israel-Emanuel in...
Shabbat Menucha

The Traditional Service for Friday Evening