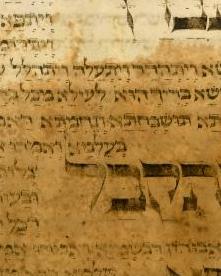 Kaddish is one of the most important and central parts of the Jewish liturgy. Most of it is in Aramaic, and it is used as a passage between various parts of the prayer, and at its end.

Originally, the Kaddish was not an integral part of the liturgy. The Talmud describes the Kadish as a finishing prayer after a study of an "Agadah,"  which was conducted in Aramaic as well. Only during the Ge'onim era didthe Kaddish become a part of the liturgy, that requires a Minyan of ten men in order to recite it.

The content of the Kaddish is the appearance of God's kingdom on earth, and the exaltation and sanctification of God. In most of the Nussachim there is also a request for salvation and for the coming of the Messiah- "Va-Yitzmach Porkaneh Va-Yikrav Meshicheh" (Eng. "And may His salvation blossom and His anointed be near").

The opening words of the Kaddish are "Yitgadal Ve-Yitkadash Shemeh Raba" (Eng. "may his great name be exalted and sanctified is God's great name)," and are based on Ezekiel 38, 23.[1] The most important phrase in the Kaddish is "Amen, yehe shemeh raba mevorach le'olam vele'olmey olamim" (Eng. "May His great name be blessed for ever, and to all eternity"), which is recited by the entire congregation.

There are several kinds of Kaddish that differ from one another in their additions to the main Kaddish:

Kaddish Shalem: This Kaddish is said only once during the service, after the Amidah prayer. Added to it is a request from god to accept the prayers of Israel, and hence it is also called "Kaddish Titkabel" (from the verb "Yekabel"- meaning "to accept").

Hatzi Kaddish (lit. half Kaddish) or Kaddish Le'ila: In this form, only the main part of the Kaddish is said, without any additions. It is usually said by the leader of the service, between various parts of the prayer.

Kaddish Derabenan: As with the Kaddish Titkabel, it contains Baqashot (Eng. requests) as an addition to the main part of the Kaddish. In this case, the requests are  to give blessings to the Talmidey Chachamim (Eng. wise students), and therefore it is called Darbenan. This Kaddish is said at the end of a study of Oral Torah (Heb. Tushba).

Kaddish Yatom: The Kaddish that is said for the deceased,during the first eleven months after their passing The Kaddish functions not only as a prayer for the soul of the deceased, but also as the mourner's reconciliation with fate and judgment.

In February 2007, an important 18th century Jewish musical score has been discovered, which include several Kaddish prayers. The manuscript was dated 1793, and was discovered in the mansion of cantor Abraham Lopes Cardozo (1914-2006) in New York. This previously unknown manuscript includes the majority of Kaddishim and Keddushot, piyyutim for Sabbath and themes of Cantatas that were composed for the Portuguese synagogue in Amsterdam by various composers. It is related to other musical resources of the Amsterdam Portuguese community, which were researched meticulously by Israel Adler.

The Kaddish is referenced in many musical works. Among them are:

(Translation of lines from the Kaddish is taken from Kaddish, Wikipedia.com)

[1] "Hitgadalti, Ve-Hitkadashti, Ve-Nodati, Le-'Eney goyim rabim; Va-Yed'u, ki ani yehuva" (Eng. "I will magnify Myself, sanctify Myself, and make Myself known in the sight of many nations; and they will know that I am the LORD").

"Kaddish," from Deux mélodies hébraïques for voice and orchestra, by Maurice Ravel.

Kaddish is one of the most important and central parts of the Jewish liturgy. Most of it is in Aramaic, and it is used as a passage between various parts of the...

The unique character of Ashkenazi synagogal music. Homage to A. Z. Idelsohn

For cantor (Baritone or tenor), mixed chorus and organ.