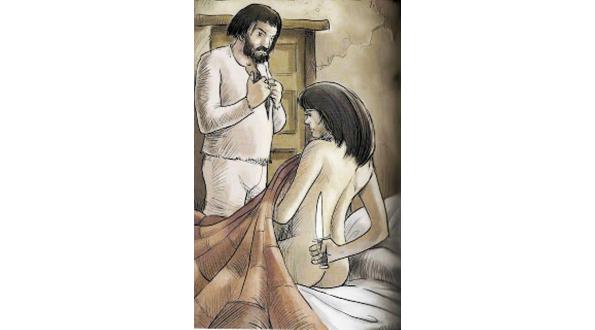 Our Song of the Month is dedicated to Sephardic music and flamenco, two traditions that crystallized in the Iberian Peninsula and are at times associated with one another.

In today's global "world music" scene, Sephardic music (also known as Ladino music) and flamenco, two separate and distinct repertoires, are sometimes fused together. One of the primary reasons for this link is the similarity between the musical languages of the two genres. Fusions between Sephardic music and flamenco were inspired by a few pioneer musical projects carried out over the past four decades that actively blended between them. In the following paragraphs we aim to expose differences between these two vast repertoires, in spite of the alleged commonalities that are promoted by these fusion projects, and at the same time to investigate a few possible connections.

Sepharad is the medieval Hebrew name for the Iberian Peninsula. The Sephardic Jews' ancestors were finally expelled from Spain in 1492 and spread around the Mediterranean. Sephardic communities in northern Morocco and in parts of the Ottoman Empire, maintained their Romance language, usually known as Ladino but also as Sefardí, Judesmo, Judeo-Español , and Haketía in northern Morocco.  Ladino, is based on medieval Romance languages from the Iberian Peninsula along with vocabulary, morphological and phonological features adopted from Hebrew and the local languages of the peoples that surrounded the Jews in the various countries where they settled. In their diasporic communities Sephardim sang a repertoire of songs in Ladino, belonging to different genres such as  romances, Cantigas – or canciones, and coplas. The latter is the only genre that is unique to the Sephardic tradition while the first two can be found in Spanish non- Sephardic sources as well. The performed repertoire of Ladino songs was maintained mostly by oral transmission, primarily by women. The romances, for example, were sung as lullabies and were therefore transferred by mother to child. Yet, coplas were mostly printed and distributed in chapbooks and were sung by male singers.

Flamenco is an Andalusian art form from the southern region of Spain that includes instrumental music, singing and dance. Theories as to how and when flamenco took shape are highly contested and informed by modern ideologies, but it is agreed that its creators were active in Andalusia, most especially the gitanos --- the Roma people who settled in Spain around the 16th century. It is also agreed that flamenco acquired its present-day style around the end of the 18th century, but only developed into the coalesced art form known as flamenco around the middle of the 19th century. This process took place during the period of the "Café Cantantes" (lit. “Singing Cafes”), venues that hosted variety shows, including flamenco.

Relations between the Sephardic song and flamenco: myth and reality

The chronology of the historical development of Sephardic music and flamenco shows the distance separating the two traditions. The Gitanos arrived in Spain during the 15th century, only a few decades before the Jews were expelled in 1492. It therefore seems unlikely that Sephardic Jews could have interacted with the gitanos, having left shortly upon the arrival of the people who brought the seeds of flamenco to Spain. Moreover, the Jewish expulsion from the Iberian Peninsula occurred centuries before flamenco actually existed in its present form.

On the other hand, the various versions of the history of flamenco almost always mention some Jewish influence on the development of flamenco, although it is almost never specified  in what  particular way. For example, a common hypothesis among flamenco musicians and flamencologists is that the Petenera genre of flamenco is of Jewish origin, although this has not been proven by solid research.

The melodies of the Sephardic song are usually borrowed from or influenced by the music of the surrounding cultures where the Sephardic Jews lived. For example, melodies of the Sephardic Jews from Morocco are related to Moroccan music. Therefore one could assume pre-15th century contacts between flamenco and Sephardic music, but such an assumption cannot be supported by any tangible evidence. Yet, modern texts nurtured such a connection in the context of the rapprochement between Sephardic Jews and contemporary Spain.  Among the most disparate texts on this subject is the much quoted article by Medina Azara (pseudonym of the Jewish essayist Máximo José Kahn), "Cante jondo y cantares sinagogales" (Revista de Occidente, Madrid, 1930). In spite of the severe criticism of his theories by distinguished Spanish scholars such as Manuel García Matos, this unfounded myth of Judeo-flamenco connections fostered by the modern imagination continued to provide the basis for recent artistic endeavors.

In recent years, a number of artists integrated  elements of flamenco into new arrangements of Sephardic songs.  Two musicians who fuse these two genres are the Israeli singer Yasmin Levy and the guitarist Baldi Olier. This Sephardic and flamenco fusion often causes confusion among their audiences. A famous example is the song Nací en Álamo. This song's beautiful melody comes from the Greek song Nas Balamo that was set to Spanish lyrics for the soundtrack of the movie Vengo (2000, dir. Tony Gatlif) where it is performed in a flamenco style, achieving international fame. Yasmin Levy, known as a Ladino singer, recorded Nací en Álamo and as a result of it the song is often wrongly categorized as either a Ladino or a flamenco song while in fact it is neither.

On the other hand, a few flamenco artists have taken interest in Sephardic music and have attempted to merge the two genres. Andres Marín, a renowned flamenco dancer, has, for example, cooperated with Mor Karbasi, an Israeli singer who specializes mostly on Sephardic songs.

The romancero as a shared heritage

An actual connection between the two genres is the romance genre. The Sephardic romance is a type of narrative poem, a ballad, which originated in medieval Spain. The romance consists of an indefinite number of sixteen-syllable lines. Each line is divided by a caesura into two hemistiches of eight syllables each. The melody of the romances, consisting usually of four phrases of equal length each one covering a hemistich, creates “strophes”. Many texts from the Sephardic romancero (collection of romances) are also found in the general Spanish romancero. Romances were common in Spain already in medieval times and the exiled Sephardic Jews remembered and continued to sing romances in their new hosting countries. Throughout the years, the melodies of the romancero have changed and were borrowed from or influenced by the music of the non-Jewish society. In flamenco, there is a style called romance, which shares similar themes and structures with the Sephardic romances, as the gitanos also adapted the same texts to their music. Two examples are the romances Amnon y Tamar and Las señas del marido. Therefore, although there is no musical connection between the Sephardic and flamenco romance traditions, textual similarities can be found.

I would like to discuss now one romance whose contemporary performance fuses between Sephardic music and flamenco: Mor Karbasi's version of La Gallarda matadora (The killer lady).

La Gallarda matadora is found in two repertoires of Sephardic romances: in the Eastern-Mediterranean Sephardic communities such as in Greece and Turkey, and in the North-Moroccan communities.[1] Although the first version has been recorded in some interesting commercial renditions, e.g. a very early one by Haim Effendi, I will focus here on the latter.

The romance begins with La Gallarda (a lady) brushing her hair by a window. Upon seeing a knight passing by, she invites him to come up. The knight comes up and sees a hundred heads hanging from the olive trees. He does not try to escape, but rather eats and sleeps with La Gallarda. In the middle of the night he notices that she is moving in bed, and asks her why. She responds that she is looking for her dagger, but the knight already has it and uses it to kill her. Then he knocks on the door so that the doorman would let him out. To this request the doorman replies that the knight is the first person who has come out alive from La Gallarda's house. The text to this romance is also found in variants in Spanish romances and in other sources from around Spain.[2]

Karbasi, who is of Moroccan Jewish origins, sings a version of La Gallarda matadora from Tetouan, where the most important Jewish community in North Morocco was located. Four variants of this romance from Tetouan are found at the National Sound Archives. Karbasi selected the version by Flora Benamol as the basis for her arrangement. It is originally in A minor, 6/8 meter, but it is sung without a constant beat. Karbasi adapted the song to the flamenco style called Bulería which also has a 6/8 meter (although it is also considered  to be 12/8). Most of the flamenco arrangements of Sephardic songs use simpler flamenco rhythms of four beats, such as the Rumba and Tangos. In this example, Karbasi uses the more complicated Bulería, which points to a richer understanding of the intricacies of flamenco.

Karbasi's arrangement includes singing, flamenco guitar played by Salvador Gutierrez who composed the guitar arrangements, as well as palmas (hand clapping) and jaleo (shouts that encourage the musicians) performed by El Oruco (José Manuel Ramos). Both musicians are from Seville, the place where the song was recorded. Gutierrez's style of playing can be considered as a modern flamenco guitar and is reflected in his choice of voicings, harmonies, and rhythmic interpretation of the Bulerías. This version of the Sephardic romance La Gallarda matadora is, in essence, a fusion between two separate musical traditions and yet they sound like a completely natural combination, creating the illusion that indeed both traditions share a common past.

--- Yo no puedo abrir a nadie, mientras no amanezca el día

Gallarda was sitting in her window

Combing her golden hair, which is like fine silk

A knight passed there, coming from Santa Maria

Come up, come up, knight

The knight came up, and entered the room

And stood by the window to take in the fresh air

Whose heads are these, my treacherous Gallarda?

Gallarda sets de table and the knight watches her carefully

I already ate at home, because it was the last day

Gallarda makes the bed, and the knight watches her carefully

She put mattresses of wool, and sheets of the finest fabric

And in the middle of the sheets, she hides a golden dagger

At midnight Gallarda stirred in the bed

What are you looking for, my treacherous Gallarda?

I am looking for a dagger of gold, to take your life away

The dagger you look for, I have it in my hand

He stuck it in her back, and cut her heart

It was midnight when Gallarda died

I cannot open to no one until dawn

Because if Gallarda would know, she will kill me

Do not be afraid of Gallarda, and her gallantly

Gallarda is dead, lying in her room

If it is true what you are saying, the French kingdom of Castilla

Out of a hundred that have entered, you have come out alive.