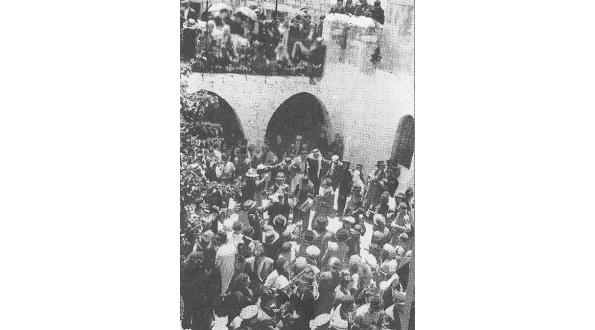 The celebrations on the eighteenth of Iyar—Lag Ba’Omer—among Sephardic and Ashkenazi communities in Israel, include four customs: the lighting of candles inside synagogues, bonfires under the open skies, the first haircut for three-year-old boys, and processions with Torah scrolls. These are all part of the Hillula (the marking of the anniversary of a deceased saintly figure) of the Tanna Rabbi Shim'on Bar Yohai (2nd century CE). These events were first held in Mount Meron, in the northern Galilee, where the graves of the Tanna and his son, Rabbi El'azar are located, at least since the second half of the sixteenth century.

Based on various sources, Yosef Braslavski has attributed these celebrations to the influence of the sixteenth century kabbalists – the disciples of the Holy Ari (R. Isaac Luria Ashkenazi) from Safed, the main city of the Upper Galilee located rather near to Mount Meron. However, the bibliographer and scholar Avraham Yaari in his article “History of the Meron Hillula,”[1] has shown that these practices were actually developed in opposition to the opinion of the kabbalists from Safed. These kabbalists did indeed have the custom of going on pilgrimage to the graves of the Tannaim in Mount Meron and of praying and studying the Zohar there; however, they did not do this on Lag Ba’Omer, but rather on two other dates, namely ten days before the Festival of Shavu'ot and again ten days before Rosh Hashannah. On each of these occasions the pilgrimage lasted for ten days.[2]

Based on his analysis of the written sources, Yaari found that the “Musta'aravim” (Jewish residents of the Land of Israel, who, for generations, had lived with Arabs and had adopted the Arab language, dress, and customs) were the ones who had developed the Lag Ba’Omer customs in Mount Meron in the sixteenth century. These were intended as a substitute for the pilgrimage to the grave of the prophet Samuel located north of Jerusalem, which took place on the traditional day of his death (the twenty-eighth of Iyar). For about ten days following this day and including the festival of Shavuot (the sixth of Sivan), the four customs (lighting of candles, bonfires, first haircuts for children, and Torah scroll procession) took place at the grave of Samuel.[3] Because the celebrations in Samuel’s alleged burial grounds were connected to the Hillula of the great prophet Samuel, it began to be celebrated in Meron in the same fashion.[4]

The Hillula in Meron begins on the eve of Lag Ba’Omer with the "Hadlaka" (kindling of two bonfires) on the roof of the building where, according to tradition, Rabbi Shim'on Bar Yohai and his son are buried. There, it is customary to light a third beacon in remembrance of Rabbi Yitzhak Nafha. In addition, on the eve of Lag Ba’Omer, a traditional Torah procession is held in Safed. This procession starts at the courtyard of the house of R. 'Abu, heir to a family of Moroccan Jews who settled in Safed in the nineteenth century, and culminates with the bringing of the Torah Scroll to Mount Meron. The following day, after the morning prayers, the “Halakah” is held—the first boys' haircut.

During these celebrations, members of the various Jewish communities sing piyyutim that were written in honor of Rabbi Shim'on Bar Yohai, as well as other songs according to the tradition of each community. The Hassidim, who lead part of these celebrations and climb at midnight (after “the lighting” of the bonfire) with the klezmorim to the grave of Rabbi Yohanan the Shoemaker also located in Mount Meron, sing piyyutim in honor of Bar Yohai from a repertoire that spread in recent centuries to many Sephardic and Ashkenazi communities. Two of these famous songs are “Bar Yohai nimshahta ashrekha” composed in the sixteenth century by the kabbalist Rabbi Simeon Ibn Lavi (who was probably born in Spain) and “Va-amartem ko le-hai” composed by Rabbi Yosef Haim of Baghdad (1835-1909), known as the Ben Ish Hay, one of the luminaries of the Sephardic world in recent generations.[5] Among the more recent songs in honor of Bar Yohai is the one with the refrain, “Likhvod Ha-Tanna Ha-Elokai Rabbi Shim'on Bar Yohai” (“In honor of the holy Tanna Shim'on Bar Yohai”). This song was written by R. Leib Yosef Shapira (d. 1951), the grandson of Alter Leib Shapira who fled Russia during the time of the Czar Nicholai II, sojourned in Jerusalem, and settled in Safed.

R. Leib Yosef, who served in various public positions even after his move to Tel-Aviv, was one of the regular attendees at the Mount Meron celebrations, and composed an additional song in honor of the Hillula.[6] According to Yosef Hagalili, R. Leib Yosef loved to sing the song that is credited to him, "Likhvod Ha-Tanna Ha-Elokai." The song is mostly constructed according to the Hebrew acrostics of “atbash” (alternating the Hebrew alphabet in direct and reverse orders; certain changes to this structure appear at the three first and the last two verses). The crowd answers after each verse with the refrain “In honor of the Holy Tanna,” or alternatively, “By the merits of the holy Tanna.” Whether Yosef Hagalili’s hypothesis is correct or not, the song is identified with R. Shapira, and is sung to this day by Hassidic groups, especially by the Karlin and Boyan Hassidim.

Like many other songs in the Hillula genre, the melody, which is shared by the verses and the refrain, attests to the Middle Eastern influence on the piece. The melodic range is limited. The meter is duple, like most Hassidic dance niggunim; the rhythm is very simple and generally fits the syllabic setting of the text.

In the past there were some singers who had the "Hazakah" (privilege) of singing "Likhvod Ha-Tanna Ha-Elokai", and the song would be performed at every Hillula. Today, however, according to the klezmer Musa Berlin, a new practice was established: every hour on the hour during the festivities, a singer or payyetan, is assigned to sing songs dedicated to Bar Yohai accompanied by the instrumentalists.  Our song is frequently performed in this framework.

It is important to note that the phrase “In Honor of the Holy Tanna Raban Shim'on Bar Yohai” by itself (or with the continuation, “In Honor of the Holy Tanna Raban Shim'on the Righteous”), is also sung at the Hillula with a different dance tune combined with phrases from one of the Hallel psalm (which begins with “Pithu li sha'arei tzedek" i.e. “Open for me the gates of righteousness…” Ps118, 19). It is possible to sing it with many variations: alone as an independent niggun; with part or the whole of “Pithu li,” while "In Honor…" functioning as the refrain, or even tagged on forwards to the continuation of the Hallel psalm “Ana Adonai hoshi'a na.”

Some recent changes in the celebrations at Mount Meron

According to the klezmer musician Moshe (“Musa”) Berlin, the performance practices at Mount Meron today are completely different from how they were until 2005. In the past, immediately after the two main bonfires were lit on the roof of the tomb, part of the crowd would begin to dance in the courtyard of the tomb, while the local klezmer band—led by Avraham (Avrum) Segal—took its place in the corner of the courtyard. Next to them stood Avraham (Avrum) Shaffer, who, together with Segal decided what should be played following sometimes the requests of the crowd.

Today, however, according to Musa, the klezmer musicians do not stand next to the dancing audience. Instead, they perform from a raised platform above the courtyard where those who take charge (of the music and dance) also stand. In this setup, no direct communication is possible between musicians and dancers, or between the one acting on their behalf who, in the past, directed the klezmorim what to play.

Other changes have taken place as well. Instead of one klezmer band, there is today a roster of musicians that is decided upon prior to the holiday, presumably by the organizing committee. Each selected musician is permitted to play during his appointed time slot whatever he desires. The exception to this rule is Musa Berlin, who, during the 1960s, was asked to play in Meron together with Avrum Segal and when Segal would get tired, Musa would take his place. Even today, Musa is allowed to go on stage and play as long as he wishes.

Text of In Honor of the Holy Tanna, Rabbi Shimon Bar Yohai

Honored guests, dear friends/ whom have you here and what have you here/ In Honor of the Holy Tanna, Rabbi Shim'on Bar Yohai.

Your city will be built and your Temple will be established/ And we await you on your three holidays/ By the merits of the Holy Tanna, Rabbi Shim'on Bar Yohai.

Profit and salvation and tumultuous voices/ Will be heard in your houses, by the merit of your kings/ By the merits of etc.

The masses in the Galilee are singing like flutes/ Whom have you here and what have you here/ In honor of etc.

Farmers of Yesod Ha-ma'ala and dwellers of Metula/ Whom have you here and what have you here/ In honor of etc.

Vegetation of your earth, and your progeny/ and the multiplying of your herds, will be blessed/ By the merits of etc.

Redemption and welfare, on still waters/ on the altars of success, like the shining sun/ By the merits of etc.

Cradle of unity will in the ways of Judaism/ will testify to your heralding/ By the merits of etc.

Uphold their beeches, to lengthen their days/ with their God’s Torah, in the lives of their parents/ By the merits of etc.

Guide them, and dwell among them/ And in the Land of their ancestors, save them/ By the merits of etc.

Every audience and congregation, from the communities of Judea/ Whom have you here and what have you here/ In honor of etc.

Fulfill their wishes, and bless their lands/ gladden their communities and light their dwellings/ By the merits of etc.

For the chosen people: festival and Hillula/And the voice of redemption will be speedily heard/ By the merits of etc.