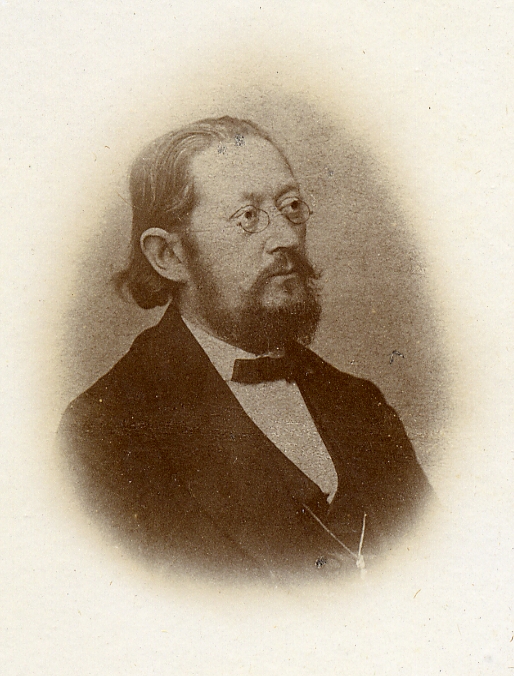 Louis Lewandowski was born in Wreschen, Poland in 1821. At the age of thirteen, as a result of his mother’s death and family’s extreme poverty, Lewandowski moved to Berlin to work as a singer in cantor Ascher Lion’s choir. During his time in Berlin, Lewandowski was introduced to Alexander Mendelssohn, who became his patron and whose support enabled him to attend the Berlin Academy of the Arts, an institution which previously had not admitted Jewish students. While at the Academy, Lewandowski studied with Rungenhagen and Grell, two of the foremost composition teachers of his time. His studies at the Academy were interrupted by a debilitating nervous illness that lasted for several years. During his illness, Lewandowski attended a concert of celebrated hazzan Hirsch Weintraub, and was so impressed by his liturgical arrangements that he decided to refocus his efforts in synagogue composition. In 1844 Lewandowski was hired by the Old Synagogue in Berlin to found and lead their choir.  He worked as the choirmaster at the Old Synagogue for twenty-four years, conducting Salomon Sulzer’s arrangements as well as introducing some of his own early four-part choral compositions.

In 1866, two years after the establishment of the New Synagogue in Berlin, Lewandowski came on board as their new choir director. The New Synagogue was equipped with an organ, which allowed Lewandowski to begin experimenting with organ accompaniment in his compositions. He introduced a new romantic style heavily influenced by the music of Felix Mendelssohn. In 1871, Lewandowski published Kol Rinah U’Tfillah, a complete collection of music for Shabbat and Festivals.  His seminal work, Todah W’simrah, a collection published in two volumes from 1876-1882, featured Synagogue music for solo, four voices and optional organ accompaniment. In addition to his role as choirmaster, Lewandowski worked as a music teacher at the Jewish Free School, and the Jewish Teacher’s Seminary in Berlin. He also served as honorary president of the Cantors’ Association and was appointed the Royal Music Director of Berlin.

Louis Lewandowski was born in Wreschen, Poland in 1821. At the age of thirteen, as a result of his mother’s death and family’s extreme poverty, Lewandowski moved to Berlin...

Isaac Schlossberg is a composer and conductor. He was born in 1877 in St. Petersburg to a family of hereditary cantors. His grandfather, Nathan Schlossberg, and his...