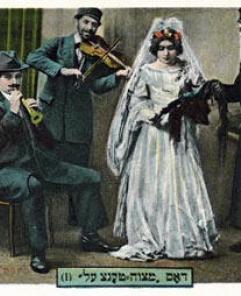 The Mitsve Tants, or Kosher Tants, is a ritual dance imbued with mystical significance. It is performed today as the final ceremony of a Hassidic wedding, after the feast. Male members of the two families are invited to dance in turn with the bride. When a Hassidic rebbe is present, he is invited first. Each dancer holds one end of a sash (Gartel in Yiddish) or a big handkerchief, while the bride holds the other end. After a brief dance, each man retires but continues to dance with a group of Hassidim. The last dancer is the groom, who actually holds the bride’s hand.

The ritual originated with Jews from central Europe and it is first mentioned in the 16th century, though in all likelihood it was in use since the 14th century and probably migrated to eastern Europe in the 18th century at the latest. In Jewish musar literature and minhagim books of the 17th and 18th century, the ritual is found as a growingly established custom, although it was sometimes considered controversial.

The controversy of the dance was mainly caused not from the ritual dance itself, since dancing in front of or with the bride was seen as a mitsva since old times, but due to the direct contact, in public, between a man and a woman who is not his wife. Today, the Mitsve Tants is customary mainly in Hassidic communities, which, from the time of the first generations, saw dancing as a way for praising God and for attaining spiritual elevation. Dancing with the bride, especially the Tsadik’s dance, was thought to have a metaphysical meaning and power in the Supernal worlds [sefirot], according to the Kabalistic interpretation. As a reaction to this interpretation, the non-Hassidic orthodox communities (today called "Litaim") totally reject the ritual, while even the Hassidic communities of Chabbad and Bratslav, do not perform the dance. On the other hand, in recent times there were attempts to renew the ritual in weddings of the national-religious society.

There are two patterns to the Hassidic Mitsve Tants. In the Diaspora tradition, it is a Badhan who invites the guests to dance with the bride with prepared or improvised rhymes (sound example 1). The niggunim of the Badhan includes traditional melodies of the Badhanim, and others borrowed from the general Hassidic repertoire, such as Devekut niggunim, waltzes, joy and dance niggunim, according to his personal taste. Sometimes he picks his niggunim out of the repertoire of the dynasty which holds the wedding (sound example 2). On the other hand, in communities following the Jerusalemite tradition, such as Sanz, Karlin, Slonim, and Toldot Aharon, the Badhan is replaced by an announcer who invites the dancers chanting a short text. The text, sung to a melody based on a tune from the Yom Kippur liturgy, includes repetition of the word "Ya'amod" – from the call to the Torah - and praises to the invited, sometimes in a humoristic spirit (sound example 3). When the groom is invited, the announcer begins with the cantorial singing of "Akavia Ben Mahalalel Omer", taken from funeral services, as well as the prayer "Misod Hakhamim u-Nevonim" from the High Holiday morning service (sound example 4). The use of these texts symbolize the wedding as the Day of Judgment in the life of the couple.

See also Mitsve-Tants in the Lexicon of Klezmer Terminology (LKT).

Sound Examples:
1. Invitation of the uncle by Badkhones

Performers: The badkhn Yosef Greenwald (" Yosef Ramler") and guests, recorder: Yaakov Mazor. Rehovot, 16.6.1971. From the JMRC Cd- The Hasidic Niggun as Sung by the Hasidim.

4. Sequence of: Ya'amod and the dance tune Boreh Olam Bakinyan

The Mitsve Tants, or Kosher Tants, is a ritual dance imbued with mystical significance. It is performed today as the final ceremony of a Hassidic wedding, after the...

In Yiddish, in most of the Hasidic dynasties, the word Fal refers to a section of a niggun (hence, "tune"). Lubavitch Hasidim on the...

A term used by Hassidim and East European hazzanim; it literally means 'Movement.' An ambiguous term, found in contemporary Hasssidic written and oral sources, and may have several,...