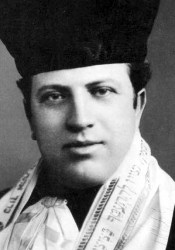 Mordechai Yardeni was Born as Motl Sherman in 1906 in the town of Slovechno (Volyn province of the Russian Empire, now Ukraine). His father, Chaim Sherman, was a shochet (a ritual slaughterer), a baal-tefila (cantor), and a teacher of Gemarra. His mother, Malka, came from a family of wealthy contractors.

In 1922 his family immigrated to the United States and settled in Philadelphia, where Motl continued his studies at the local yeshiva Mishkan Israel. Later he enrolled in The School of Music and Drama. As a writer, Sherman made his debut writing in 1929 at the newspaper "Forverts". At the same time, the Philadelphia newspaper "Yiddishe Welt" began to publish his musical and theatrical reviews. In February 1930, at the Gibson Theater, he made his debut in the operetta Hasidish Yenkiz (conducted by Saul Dickstein) and later played a small role in the melodrama Der Eibiker Stroff (Eternal Punishment).

In 1931, after a short stay in Israel, where Sherman continued to study music, he once again entered the theater stage: this time in Avraham Goldfaden's operetta Shulamit. At the same time, under the pseudonym Mordechai Yardeni, his first compositions Eso eynay (I lift my eyes) and Tsaakat ha-navi (Lamentations of Jeremiah) were published in an arrangement by Nahum Nardi. In 1932, Yardeni left for Israel again, where he lived for another 4 years.

In 1936 he returned to New York, where he performed in concerts and on the radio as an "Israeli" singer, with a repertoire of "Israelian" songs and Jewish liturgy. From 1940 he began to accept offers from various synagogues on the East Coast of the United States and "Jewish" hotels to work as a cantor during the Jewish holidays. At the same time, he also recorded several records for Victor and Asch.

From 1938 to 1953 Yardeni (with playwright Viktor Peker) hosted Di Geshichte Fun Mine Lead (The Story of My Songs) on New York Jewish Radio.

From 1938 to 1955, Yardeni was a music critic for the newspapers Der Tog, Forverts, and the Morgn magazine. In 1951 he edited the Hazanim Journal. In 1960, he published a biography of Leo Liov (Leo). He also published collections of articles: Interviews mit Yiddish Schreiber (Interviews of Jewish writers), three-volume Wort un klang (Word and sound), 50 yur Yiddish gezang in America (50 years of Jewish song in America), etc.

Mordechai Yardeni died in 1982 in Miami Beach, Florida, and was buried in New York, on a Jewish Theater Union site.

Mordechai Yardeni was Born as Motl Sherman in 1906 in the town of Slovechno (Volyn province of the Russian Empire, now Ukraine). His father, Chaim Sherman, was a...