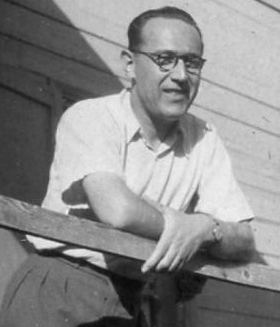 Moshe Wilensky was born in 1910 in Warsaw, Poland. During the first World War, his family emigrated to Russia where they stayed until 1917, when they returned to Warsaw. In his youth, he studied at the "Eskela" Jewish Gymnasium, where the Hebrew was taught in addition to general studies.

Moshe Wilensky's talent for music was discovered at the age of four when he played the piano at home although he only later began to learn to play in an orderly and systematic manner. At the age of 13, he joined the Zionist youth movement Hashomer Hatzair. There he first learned the songs of Israel. In the movement, there was a choir guided by the musician Yitzhak Adel. Adel would greatly influence Wilenski's musical work, and he taught him musical theory. In 1928 Wilenski graduated from high school, and on Adele's recommendation he continued his music studies at the State Conservatory of Warsaw. In 1932 he successfully completed his studies in composition and conducting. That same year, at the age of 22, he immigrated to Israel with his family and settled in Tel Aviv. In the years 1936-1939, he studied engineering at the Technion's campus in Tel Aviv. In June 1939 he married the theater actress, Berta Yakimovska (1917–2013).

In 1932, when he arrived in Israel he began working at the satirical theater "Hametate" ("The broom") as a pianist and composer. Wilensky composed music to lyrics written by Natan Alterman and Yaakov Orland, including "Gedalia Reva Ish", "Elimelech" and "Hatender Nosea". They were performed by Esther Gamlielit on the stage of the "Hametate" theater. In addition, he composed music for films of "Hakeren Hakayemet" (the Jewish National Fund) and "Yomani Carmel" ("My diary Carmel").

In 1934, the owner of the "Achva" record company, Dov Mayblet, chose Wilensky to compose arrangements for 30 popular songs of the time. The songs were sung by Yosef Goland and they were the first records produced in Israel.

In 1936, he founded with the promoter Zeev Markovich the ACUM, an association of composers and directors for the preservation of copyright in the fields of music and literature. They were joined by important poets, writers, and composers including Leah Goldberg, Avraham Shlonsky, Alexander Penn, Yedidya Admon, Mordechai Zeira, Emanuel Amiran, and more.

In 1937 he formed the quartet "Gilali" which performed his arrangements of Hebrew song, Chassidic music, and jazz. The quartet's performances, accompanied by Wilenski's piano, were broadcast on Israel radio.

In the late 1930s, Wilenski joined the small satirical theater "Kol haruchot" ("All the Spirits"). One of this theater's founders was the poet, playwright, and translator Avraham Shlonsky. Wilenski composed for this theater the song "Tzarich Letzalzel Paamaim" ("Need to Ring Twice") to the words of Natan Alterman. This song became one of the best-known songs of this period.

In 1944, Wilensky began working as a regular arranger and composer at the Musical Theater "Li-la-Lou". He composed the famous song "Kalaniyot" ("Anemones"), which was performed by Shoshana Damari. It was Damari's first collaboration with Wilensky, which continued throughout his life. Wilensky composed most of her songs, including East-Yemenite-style songs to lyrics from Alterman and Orland such as "Zechariah Ben Ezra" and "Miriam Bat Nissim."

During the War of Independence, he composed songs for the Palmach band, "The Cheesebatron", including "Hakrav Haacharon" ("The Last Battle"), "Hayu Zmanim" ("There Were Times"), and "Chisbat". He also accompanied Shoshana Damari in performances for soldiers. In 1949 Wilenski toured the United States with Damari and Goland, and they had a lot of success among American Jewish communities.

In 1950, Wilensky began presenting a series of programs on "Kol Israel" called "Pizmon Vazemer" ("Hymn and Singer"). For these programs he composed new songs, some of which were performed by Damari, such as "Leor Hazichronot" ("In the Light of Memories") and "Haroa Haktana Min Hagay" ("The Little Shepherd from the Valley"). In the same year, he was appointed director of the record company "Hed Artzi", which published most of the common local records.

At that time, he began collaborating with the singer Yechiel Mohar. The duo "Mohroilensky", as they used to call them, created many songs for the "Nachal" band including: "Ya Mishlati", "Mul Har Sinai" (written about the Sinai War), "Hora Nitgaber", "Shir Eres Negbi" ("Negev Lullaby"). Wilenski also wrote music for films such as, "Amud Haesh" ("The Pillar of Fire") and "Dan and Saadia" (a children's film) and for the Hebrew operetta "Shulamit" where Damari had a leading role.

In the years 1961–1978, he worked for "Kol Israel" as head of popular music and conductor of the "Reshut Hashidur" (Israel Broadcasting Authority) Orchestra. The song "Stav" ("Autumn"), which he composed for Esther Ofarim and written by the poet Shimshon Halafi, won in 1963 the first place for orchestration, and the second place for performance at the radio song festival in the town Sopot in Poland. In 1964, he won again the second place in a competition in Poland with his song "Layla Veashan" ("Night and Smoke"), in the words of Mohar, and performed by Ilana Rubina. Later, songs written by Wilensky were performed at other festivals around the world.

In 1963, Wilensky composed songs for the "Shin Shin" entertainment program of the "Shi Ness" theater. In 1965 he was the musical director of the successful production "Opera begrush" ("Opera at a penny") (by Bertold Brecht) with the Radio Entertainment Orchestra. The same year, he composed music for the play "Shuk Hametziot" ("The Market of finds") presented by Eli Gurlitzky and Yona Atari. This performance included Alterman's songs such as "Limon Vetzalachat" ("Lemon and a plate") and "Elimelech". Two years later he composed the musical plays "Fishka" (1967) based on the story of "Mendele the bookseller", and "Happy at the Port" with Dan Almagor (1971). In 1978, Moshe Wilensky retired from radio.

Wilenski's music usually blends a European style with Middle Eastern musical elements. Such a fusion of European and Oriental music characterizes the great Hebrew composers, such as Nahum Nardi and Mordechai Zeira. Wilenski's melodies were characterized by easily remembered melodies which were completed by the orchestration, to which he devoted a lot attention. Wilensky’s greatness was in his arrangements and orchestration that he created for his songs, with sometimes the overture alone being a work in itself.

In 1983, he received the Israel Prize for his musical enterprise and for his contribution to Hebrew songs. The judges for the Israel Prize would state that "Wilensky is the perennial composer of the land ... His first songs and hymns were recorded in the Hebrew community and sung by everyone and many of them are played to this day." In 1986 he won the ACUM Prize for Lifetime Achievement, and in the same year, won the title of Dear Tel Aviv.

Moshe Wilensky was born in 1910 in Warsaw, Poland. During the first World War, his family emigrated to Russia where they stayed until 1917, when they returned to...

Nahum Nardi was born Nahum Narodietzky in 1901 to a religious-Zionist family in Kiev, Ukraine. He was named after his uncle Dudu "Noyhem," who was the court rabbi of the community. He began his...