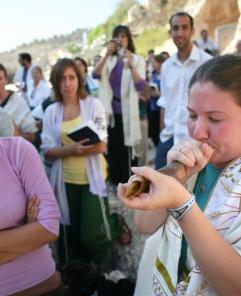 Nei’la is the fifth and last service of Yom Kippur (Day of Atonement). In contrast to all Sabbaths and Holy Days, which have four services, Yom Kippur is the only Holy Day that has five. As the last prayer of the day, Ne’ilah starts approximately one hour before sunset, and hence its Hebrew name, Ne’ilah (lit. “closing”), meaning the concluding of the day and of the divine judgment.

Originally, Ne’ilah was called "Ne'ilat She'arim," a term that has a double meaning. Literally, it refers to the closing of the gates of the Temple in Jerusalem in ancient times, since Ne’ilah was said at the time when the Temple gates were being closed. There is also a spiritual meaning as it recalls the closing of the Gates of Heaven, offering a final chance for prayers to be heard by the Supreme Judge. Because Ne’ilah signifies the sealing of the divine judgment, the word "to inscribe" which appears in all the prayers of Rosh Hashana and Yom-Kippur, is amended to the word "to seal.

In the Ashkenazi liturgy, Ne’ilah receives a unique musical treatment, especially in the melody for the Kaddish that precedes the repetition of the ‘Amidah (Hazarat ha-shatz). This practice follows the emphasis made by Ashkenazi communities to differentiate Nei'la by musical means from the rest of the High Holy Days' prayers.

Musically speaking, the main section of Ne’ilah is the Hazarat ha-shatz, which consists of a sequence of Selihot, including several piyyutim and the recitation of the 'Thirteen measures of mercy’ (Shlosh-esre midot) between them. The piyyutim Ata Noten Yad Leposh'im and Ata Hevdalta Enosh Merosh have particular significance. After the Hazarat ha-shatz, there are three declarations of faith, said by the cantor and repeated by the congregation: "Shma yisrael" (said once), "Baruch shem malchuto le'olam va'ed" (said three times), and "Adonai hu ha'elohim" (said seven times). After these declarations, a Kadish Shalem is recited, in the middle of which a single blow is made by the Shofar. The prayer ends with the congregation expressing joy and hope by declaring "Leshana habaa biyerushalayim habenuya" (next year in Jerusalem).