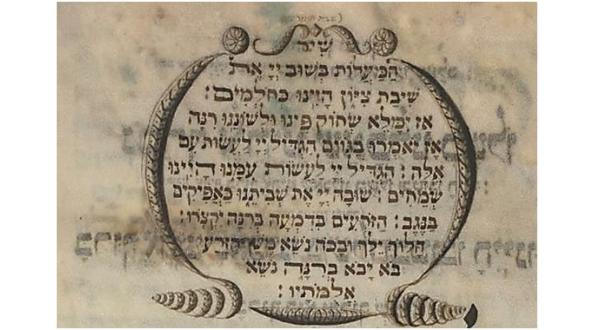 German-speaking Jews often used melodies from synagogue services for settings of Shir hama’alot [The song of ascension, Psalm 126] sung just before the Grace after meals. This practice was grounded on the mobility of melodies of certain liturgical piyyutim that in the course of time became signifiers of the particular Holy Day that the piyyut belonged to thus creating a typical sonority associated by members of the community to specific times within the liturgical year cycle. Such melodies could be transferred to other liturgical texts in the liturgy of the same Holy Day, such as Lekha dodi, certain psalms from the Hallel, Adon olam, Mevarkhim hahodesh, etc.

These "temporal" melodies were later brought home and applied to Shir hama’alot at the end of the festive meal of the Holy Days or Sabbaths preceding or during those same Holy Days. For example, the melody used for the shaking of the lulav during the Hallel service on the festival of Sukkoth, called the Lulawschütteln  or schüttelnmelodie, was also sung with other texts of the Sukkoth liturgy as well as with Shir hama’alot sung after the festive meal of that Holy Day. The domestic use of temporal melodies brought the festive atmosphere of the synagogue service into the home, and elevated the mealtime to a festive occasion with sacred meaning, beyond the mere consumption of food.

Although the text of Shir hama’alot refers mainly to the hope of the return of the Children of Israel from the Babylonian exile in the past, it is used during mealtime as a prayer for future redemption which should be mentioned in times of happiness and bodily pleasure.[1] The custom of singing Shir hama’alot before the mealtime Grace is mentioned in medieval literature. The everyday equivalent to Shir hama’alot is Al naharot Bavel [Psalm 137] referring to the destruction of the temple, which is said on days were the Tahanun is recited in the synagogue service,  While Shir hama’alot is only recited on weekdays with no Tahanun and on the Sabbath and Festivals. By using either Shir hama'alot or Al naharot Bavel as an introduction to the Grace after meals, the sages were able to differentiate the everyday meal which is a memorialization of mourning from the festive and Sabbath meals which are intended to be a getaway toward redemption.

Singing Shir hama’alot to the typical melodies of the yearly cycle was a widespread musical custom of German-speaking Jews.[2] In many ways this usage emphasized how the domestic and public spheres shared a musical repertory. By the second half of the twentieth century, when many German Jewish liturgical traditions fell into oblivion, the original melodies of the festive piyyutim were no longer performed in synagogue services. Therefore the survival of these melodies as a marker of liturgical time remained alive through their continuous practice in the domestic sphere among families of German origin residing in Israel.

The following table shows which melodies of festive prayers and piyyutim were adopted for Shir hama’alot, the occasion of their performance at home and a reference to a selection of the recorded musical examples in our possession that are included in this Song of the Month. Since there are discrepancies in these melodies in the different regions where Germans-speaking Jews lived, only one local tradition was chosen here. Therefore the examples brought below belong to the musical tradition of Frankfurt which was widely documented in scores and sound recordings. The examples given below refer to the melodies of the Sukkoth, Pessah and Shavuot festivals. For the recordings and their details see below.

Sound example A: Shir hama'alot for Sukkoth. Sung by: Beno Weiss, Frankfurt- New York. Independent recording, Y 7359 side B in the National Sound Archives (No Date).

Score example A: The melody of Sukkoth set to the "Hodu" section of Hallel for Shaharit of Sukkoth. The lulav was shaken while these words were said therefore this melody was called Lulawschütteln [Germ. shaking the lulav]. Here as sung in Frankfurt am Main in 1912.

This melody was sung on the first two days of Pessah for Birkat Kohanim, and for other parts of Hallel (Fabian Ogutsch, Der Frankfurter Kantor : Sammlung der traditionellen Frankfurter synagogalen Gesänge. Frankfurt Am Main: Kauffmann 1930. p. 44.)

Score example B1: Hodu for Pessah as sung in Frankfurt am Main in 1912.

Score example B2: Hodu for Pessah appears in an Amsterdam Haggada from 1794 in an arrangement for Violin. Source: Universiteitsbibliotheek Amsterdam (Hs. Ros. 491).

Score example C: Hodu for Shavuot as sung in Frankfurt am Main in 1912.