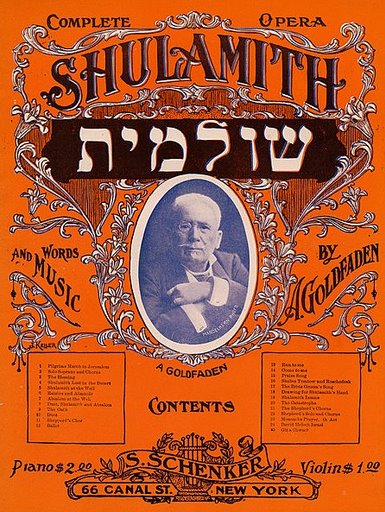 The image above is a score of the operetta Shulamit, published by S. Schenker in New York. Saul Schenker Publishers was a prominent importer and publisher of Jewish books and music in New York at the turn of the 20th century. Located on 66 Canal Street, S. Schenker Publishers was in close proximity to the heart of the Jewish immigrant population on the Lower East Side of New York City. The vocal parts appear without text-underlay; all of the song's texts are located on the back exterior of the score. The score includes twenty-five musical numbers from the four acts of the operetta. Source: Jacob Michael collection of Jewish Music at the Department of Music of the Jewish National and University Library.