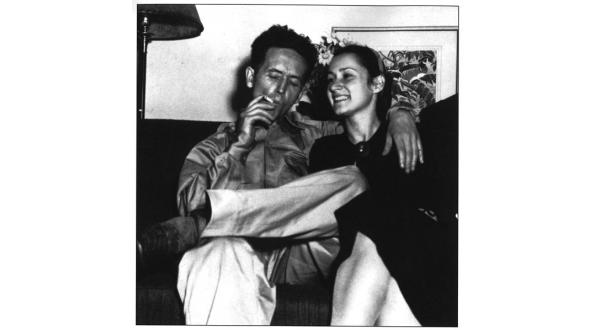 Over the generations Hanukah has generated a substantial repertoire of songs, some of which have attained an almost universal status, even among non-Jews. At the same time, the need of each generation to express itself in its particular contemporary literary and musical taste has engendered new songs. These new songs about Hanukah represent the individual reflections by poets and singers on the holiday's themes and the stories associated with it. These include, to name only a few, songs by Morris Rosenfeld, Debbie Friedman, Adam Sandler,  The Maccabeats and many additional artists. In honor of the forthcoming Hanukah celebration we will discuss a few songs written by Woody Guthrie, America's troubadour of the downtrodden and the oppressed.

Woody Guthrie (1912-1967) was one of the United States' great and prolific folk singers. Many of his songs dealt with the plight of the worker, the importance of unionization, social solidarity and resistance against tyranny in its many forms. His influence on American music is incalculable, as new generations of musicians continue to adapt and be inspired by his work.

Within his vast oeuvre there are a handful of songs with Jewish themes, and a few of them are specifically related to Hanukah. Guthrie himself was not Jewish; however his second wife, Marjorie Mazia Greenblatt, and their four children, including famous folk-singer Arlo Guthrie, were. Guthrie met Marjorie in 1942 when she was performing a dance based on one of his songs. Their first daughter Cathy Ann was born in 1943 and they were married from 1945 until 1953. In 1942 the couple moved to Coney Island, across the street from Marjorie's mother, Aliza Greenblatt, a well-respected Yiddish poet and songwriter in her own right.

It was through his close connection to the poet and socialist Greenblatt that Guthrie became more acquainted with Judaism. They would share songs and Woody would study Jewish texts and history. In the late 1940s Guthrie wrote a handful of Hanukah-related songs, some for the local Jewish community and some for his children. The themes of the songs range from joyous children's songs, without much content connected to the actual holiday (Hanuka Dance, Hanuka Gelt, Honeyky Hanukah), to songs that express the rituals and history of Hanukah (Hanuka Bell, The Many and the Few, Happy Joyous Hanuka -- the latter is structured as a cumulative song similar to the Passover Seder songs Had gadya and Ehad mi yode’a) to a song that has a certain Christian feeling to it (Hanuka Tree).

Although no direct connection has been documented, a similarity can be found between the themes that arise in most of Guthrie's Hanukah songs and a Yiddish Hanukah poem written by Greenblatt that was published during the same period. This poem, Hanukah, was released in her 1947 collection of children's poems and songs Ikh Zing, and can point towards a possible inspiration and template for Guthrie's songs. This five verse poem (one of the few holiday songs in the book published without music), like the themes interspersed between Guthrie's Hanukah themed texts, combines the telling of part of the holiday story -- in this case the story of Hannah and her seven sons – with verses on family rituals, eating Hanukah food, and a general sense of happiness and togetherness:

It is Hanukah time

And we are all prepared;

Little satchels made of linen.

We will hang the satchels

The holiday of Hanukah will

Bring us much joy and happiness.

With the dreidle we will play,

Of our father we will demand

To get some Hanukah Gelt.

Will make sure that all is done;

Tell us all of Hannah

And her seven sons.

Latkes will be eaten;

And the miracle of Hanukah

Will never be forgotten.

Guthrie recorded two of his Hanukah songs for Moses Asch, head of Folkways Records, in 1949. One is a twenty-verse song called The Many and the Few, which begins with Cyrus' decree enabling the exiled Israelites to be able to return to Cana'an and work the land. The song continues with Ezra bringing the value of Torah learning back to the Israelites, and from there the song moves on to the stories of Hannah and her seven sons, the Maccabees, the heroism of Judah and his military victories, the return to the Temple and the miracle jar of oil. It ends with a connection between this survey of history, a sense of national and cultural pride, and the modern holiday. A hint towards Zionism can also be found in this song, specifically the second verse that praises the work of the land, which can also be seen as an influence of Greenblatt who was an ardent Zionist and even moved to the newly formed state for a year:

Back to Eretz Yisroel’s land

We worked with plow and rake and hoe

And we blessed the works of our hands

The other song that Guthrie recorded for Asch was Hanuka Dance, a simple children's song, probably written for his daughter Cathy.[1]The words have no substantial connection to the content of the holiday and are similar to countless other folksongs and children's rhymes in which dance instructions are given to the listener: “Tippy tap toe”; “Clap your hands”; “Jump real high”; “Run real fast”; “Hop hop hop”; and “Skippy skip skip” (this final line is not sung on the recording but rather appears in his published lyrics).

Musically, there is not much that differentiates these songs from the rest of Guthrie's oeuvre. The Many and the Few begins with the main melody of the first part of the verse being played on the bass strings of the guitar with the rhythm played on the treble strings. Two lyrical verses are combined into one musical verse with the first verse being the A part of the melody and the second verse the B. Hanuka Dance is similar in its simplicity and adherence to Guthrie's style. Here, the off-beat is emphasized giving the song a pulsing, danceable groove. In both songs the harmonic accompaniment is similar to most American folk songs with the chords gravitating between the tonic, sub-dominant, and dominant of the scale.

In recent years Guthrie's Hanukah songs have received wider recognition due to newly composed and rearranged versions recorded and performed by world-renowned klezmer band The Klezmatics. The project came to fruition through the initiative of Nora Guthrie, Woody's daughter and overseer of the Woody Guthrie Foundation. Over the past two decades she has initiated various projects with different bands to compose and record versions of unrecorded songs from Guthrie's archive. An adddiitional notable outcome of this project is alternative rock band Wilco's collaboration with folk-singer Billy Bragg, with whom they released two albums of Guthrie's songs.

The Klezmatics recorded two albums of Guthrie's songs. The first, Wonder-Wheel from 2006, garnered the band a Grammy award for "Best Contemporary World Music Album". In the same year they released Woody Guthrie's Happy Joyous Hanukkah, a twelve-song album that includes newly composed melodies to lyrics that Nora found in 1997, adaptations of the two aforementioned songs that Guthrie recorded, as well as instrumental klezmer pieces that the band composed.

Their versions of the songs that Guthrie recorded are not that different from the originals in regards to musical style. The main difference is in the atmosphere of the songs, both of which are much more solemn than Guthrie's. The Many and the Few features a continuous drone and the song has the feel of an Irish ballad, a sense that is emphasized by the presence of Irish singer Susan McKeown, who alternates singing verses with Lorin Sklamberg, the Klezmatics' vocalist. The different character of Hanuka Dance is created by a change in guitar accompaniment, which does not accentuate the off-beat, is slower, and features chord arpeggios. Every few verses, an additional instrument enters, creating a rich soundscape. The repeating verses and guitar accompaniment, along with the rich orchestration, give the song a circular feel and the sense that it could continue endlessly.

Looking at the original compositions on the album, many have a strong klezmer feel to them due to the instrumentation, rhythms and melodies. The country-music inspired Happy Joyous Hanuka uniquely features an electric guitar that positions the piece somewhere in between Delancy Street and Nashville. Hanukah Gelt is probably the most well-known song from the album. It gained a wide national audience in the USA after it was performed on Conan O'Brian's late-night show Conan on 19/12/2011 and was also featured on The Klezmatics 25th anniversary live album. This performance of the song fuses different styles such as klezmer inspired musical passages intermingled with a jazz-oriented trumpet playing.

Sound Examples:
Woody Guthrie - The Many and the Few

1949 Recording for Folkways. Song is split into two videos.

The Klezmatics - The Many and the Few

The recording is available  here.

The recording is available here.

PDF of Aliza Greenblatt's book of Yiddish children's poems and songs. Her Hannukah poem is on page 46. PDF available courtesy of the Yiddish Book Center.