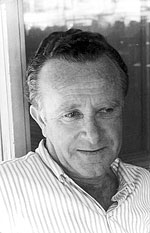 Yaacob Orland was born in 1914 in Tetiev, Ukraine, to Eliezer and Batya Orland. In 1919, at the age of five, he survived a pogrom in his town, in which eight members of his family were murdered. Following this the family moved to Kiev. The pogrom left its mark on his work through the rest of his life, about it he wrote the poem Kiev. From Kiev the family crossed the Dnieper and Dniester and moved to Bessarabia where they lived for about a year in Chisinau. In Chisinau, Orland studied at the Hebrew Gymnasium, Magen David. The same year Natan Alterman also lived there, although stayed there without knowing each other.

In 1921, at the age of seven, Orland immigrated to Israel with his parents, and settled in Kfar Giladi. From 1921 to 1923, his parents participated in the "Working Brigades", which they helped found. As part of the Brigades, they took part in paving the Metula-Kfar Giladi-Migdal-Tiberias Road. In 1923, the family moved to Jerusalem with the 'Hotzvim Company'. Yaakov’s father, Eliezer worked as a quarryman and stonemason in the 'Hotzvim Company', led by Yitzhak Sadeh, which built some of the country’s first institutions - the agency building, the Yeshurun synagogue and the national library. In 1928 Yaakov Orland studied at Tachkemoi, and in 1929-1932 he studied in the 'Rehavia' Hebrew Gymnasium.

In 1930 he composed his first song 'We sing to you homeland and mother'. This song was composed by David Zehavi, a member of Kibbutz Naan and a member of the 'Working Youth' movement, with whom Orland has a deep affinity, and where he also acted as a youth guide. His first poem, Tower of Muscles ("Migdal Shel Shririm") was published in the journal Ma'aleh, edited by the poet Zerubavel Gilad. He would continue printing his first hymns in this magazine. In the same year he enrolled at the Hebrew University. In 1932 he met Nathan Alterman. Their rather complex friendship with him would last until Alterman's death. In 1933 he began informal theater studies and set up several reading evenings in English poetry (mostly from his translations). Orland connected with members of the Shlonsky, Alterman, Penn and other groups. He was also close to Israel Zmora, editor of the journal Mahbarot Lesifrut (Notebooks for Literature), which began to appear in 1941.

From 1936 to 1939 Orland resided in England and specialized in theater studies at the Royal Academy of Drama in London. During this period he completed the writing of his first collection of poems "Ilan Baruach" ('Tree in the Wind'), which is a kind of ramified allegory of songs and hymns written in a melancholy spirit of longing for his childhood and landscapes he left behind, all presented to his lover in London in those days. Upon his return to Israel, his second collection of poems "Alim Miginat Hastav" ('Leaves from the Autumn Garden') was printed.

In 1941 he enlisted in the Cultural Division of the British Army, where he met the composer Mordechai (Mitya) Zeira who later composed many of his best-known songs. The well-known hymn Hatender Nosea ("The Pickup Truck") which was frequently sung by the singer Shoshana Damari, is perhaps the most representative of his songs at this time. Alongside it, will also be known the hymns Ets Harimon ("The Pomegranate Tree") and Shney Shoshanim ("Two Roses") which were composed at this time and entered the pantheon of Israeli songs.

In addition to composing songs and hymns, Orland also gave his hand in translation. He translated many literary works, including those of William Shakespeare and George Bernard Shaw. From 1944 to 1948, several of his masterful translations from English were published: 'Hebrew Melodies' by Byron; 'The Ballad from Reding Prison' and the play 'Shlomit' by Oscar Wilde. In 1946 he published his third book, 'Poems about an Eagle and a Dove'.

In 1951 Orland moved to Haifa and began writing plays. His play Hair Hazot ('This City') was staged in 1953 at the 'Ohel' Theater, and his play Halishke Haschora ('The Black Bureau') won him the 'Pinsker' award even though it remained in manuscript. Since 1966, his play 'Herschel from Australopi' has been staged at the Haifa Theater. He translated dozens of plays, which were performed at the 'Ohel' and the Haifa Theater.

Orland was already known as an important songwriter, as a balladist, a virtuoso of weight and rhyme, as a unique lyricist and as a gifted translator from English and Yiddish. He won many awards, including; 'Jabotinsky' (1977), 'Wertheim Prize' on behalf of Bar-Ilan University (1983), 'Literature Prize' on behalf of ACUM (1984), 'Alterman Prize' (1987), 'Bialik Prize' (1997) and The Israel Prize for Hebrew Singing (1994).

His archive is preserved at Bar-Ilan University.

Yaacob Orland was born in 1914 in Tetiev, Ukraine, to Eliezer and Batya Orland. In 1919, at the age of five, he survived a pogrom in his town, in which eight members...

Avraham Shlonsky was an Israeli poet and editor, born in the Russian Empire.