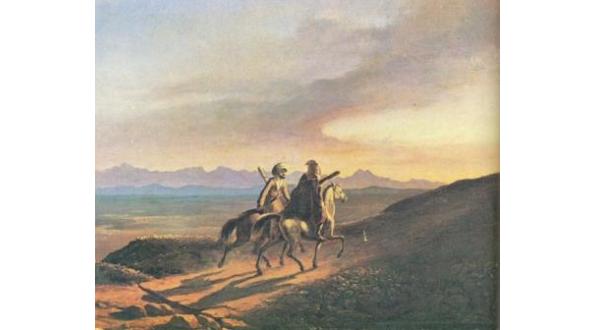 "Alone I set out on the road," wrote Lermontov, the great Russian poet, in 1841. This line has been sung many times, as it came from the very popular Russian romance, "Vyhozhu odin ja na dorogu" (Alone I set out on the road). The song travelled all the way from Russia to Israel during the second Aliya, which consisted of many Russian immigrants. These immigrants, who left their homes in Europe and arrived in a desolate country in the Middle East, could feel themselves as the lonely traveler of this romantic song.

Lermontov's Alone I set out on the road was translated by Moshe Sharett, Israel's second prime minister. He published his translation in 1965 as "Yechidi Laderekh Li Etse'a," among other translations in the compilation, "Mahberet Tergomei Shira." This translation was no exception, as many Russian songs were translated into Hebrew. In most cases, the melodies of these songs were altered to suit the rhymes and meters of Hebrew, as well as to make them easier to sing. However, in Sharett's translation, as a "joyful challenge" according to him, he attempted to write words that would fit the original melody without altering it.

Although the original Russian song is very well-known (even today, Russian immigrants are familiar with it), the Hebrew version is not known at all. Aryeh Uri, the singer in the recording attached below, has never heard this song in Hebrew. According to him, he used to hear the Russian song from his mother as a child. One day he sat in the library and came upon Moshe Sharett's book of translations. He saw the song "Yechidi Laderekh Li Etse'a", and tried to sing its words with the melody he remembered from his mother. Surprisingly, it worked.

The recording consists of the Russian and Hebrew versions consecutively. Aryeh Uri makes few mistakes in his singing. He alters the original melody in a few places, as can be seen when compared to the attached musical score. He also makes one textual mistake, when he sings "levadi" (alone) instead of "yechidi" (by myself). Recording of the National Sound Archive. Recorded by: Ya'akov Mazor, 1991. Y 05829

This is the melody as sung by Aryeh Uri, in the recording attached below. It has some alterations from the common Russian melody, which are probably mistakes Uri does in his singing. Thanks to Svetlana Ainbinder for the transcription.

This is a common melody of the Russian song. Thanks to Svetlana Ainbinder for the transcription.