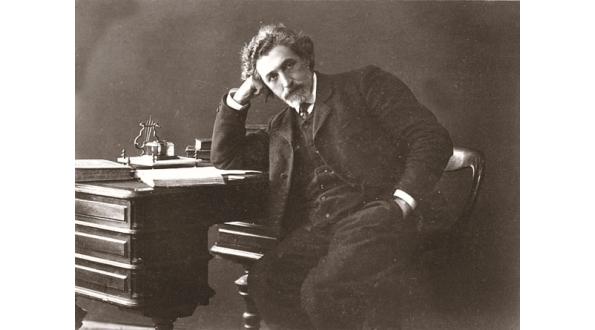 In honor of May Day and the tradition of Jewish political radicalism in late nineteenth-century Eastern Europe, our Song of the Month is “In Zaltsikn Yam” (In the Salty Sea), an early-twentieth-century Yiddish workers' song [See also Song of the Month for May 2010]. The poem was written in 1901 by S. An-sky (Shloyme Zanvl Rappoport [1863-1920]) the Jewish writer, ethnographer, poet, and radical. The song's alternative title is “Tsum Bund” (To the Bund) as it was written for the Bund, the General Union of Jewish Workers in Lithuania, Poland, and Russia (Der Algemeyner Yidisher Arbeter Bund in Lite, Poyln, un Rusland) that was founded in Vilnius in 1897.

The poem was first published in the Yiddish socialist journal Der Arbayter in 1902. It was later published in Poland in 1922 in the eighth volume of An-sky’s collected works, as well as in Chana and Joseph Mlotek's 1974 publication Perl fun der yidisher poezie (Pearls of Yiddish Poetry). In 1945 an abridged version of the poem, featuring the first, second, sixth, and final stanza, was published in Mikhl Gelbart's song book Zingt mit mir (Sing with Us). These four stanzas retain the song’s theme of the worker’s suffering that will be eliminated by the Bund, but omits the criticism against the Jewish establishment (see below).

The poem is a fierce indictment against the Jewish establishment, namely the wealthy and the Zionists who do not have the Jewish workers’ interests in mind. It ends by praising the Bund as the savior of the Jewish workers. An additional poetic connection to the Bund was An-Sky’s poem “Di Shvue” (The Oath), written around the same time, which became the Bund’s anthem. Despite the popularity of these two songs among Bund members and the strong rhetoric of “In Zaltsikn Yam” praising this political organization, An-sky was never a member of the Bund. For much of his life his main political allegiance was to the Narodniks, the social revolutionaries that saw the peasant class as the heart of the nation from which the revolution would arise.

Bund Poster that claims: "There where we live, that is our land.. A Democratic Republic with full political and national rights for Jews." Picture taken from the YIVO encyclopedia website.

Thematically, the poem can be separated into four sections. The first details an abyss that is filled with the bloody tears of a thousand years of suffering. The next segment claims that the tears belong to the Jewish worker rather than those of the wealthy Jews. The following segment raises the question of who will fight for the suffering Jews. The answers appears in the next segment: salvation won’t come from the children of the wealthy, educated, the clergy, or the Zionists.

The harshest attack against Zionism comes at the end of the seventh stanza when An-Sky writes that like the Jews’ enemies, the Zionists’ goal is to make a ghetto for the eternal Jew (a lidl, an alte, fun undzere sonim, a ghetto dem eibike zhid). Finally, in the last two stanzas, he proposes the Bund as the savior of the Jewish worker. Messiah and Jewry are dead, he claims, the new messiah is the Jewish worker who will be freed by the Bund, ending the poem with the line “Zol leben fun Rusland, fun Lita un Poilin, der yiddisher arbeter Bund,” (long live the Russian, Lithuanian, and Polish Jewish labor Bund).

This song clearly reflects the dominating ideology of the Bund, a strong belief in the power of the proletarian class and a rejection of Zionism as the answer to the Jews’ problems. The Bund believed that Jews should struggle for justice and equality wherever they live, and wherever they have a cultural history rather than immigrate to Palestine. This concept was later referred to as Doikeit, “hereness” in Yiddish. In the following years after writing this poem An-sky's feelings towards Zionism softened. In fact, he was seen as a rare figure in the constantly-in-strife early twentieth century Jewish political scene who was able to bridge between different ideologies and divides. Stephen J. Zipperstein writes: "he retained in Bundist and eventually also in Zionist circles a rare, vaulted stature as an intellectual and activist who bridged otherwise perilously rigid ideological chasms of Russian Jewish political life.” (4)

There are two main musical arrangements to the song. The first is a monophonic melody in a minor mode and in a triple meter, either in ¾ or in 6/8. It is unclear who composed it and it was sung along with the text shortly after An-sky initially wrote it. This melody first appeared in the 1919 song book Freiheits Lieder (Freedom’s Songs) published in Warsaw by Y. Glattstein. Here, the unabridged version of the poem was published but with two lines that discuss the death of the messiah omitted and replaced with asterisks. The second melody is a choral arrangement by Joseph Achron, the Russian composer associated with Saint Petersburg’s Society for Jewish Folk Music. The soprano voice follows a melodic line similar to that published by Glattstein; however the rest of the voices, along with the piano accompaniment, take the song to an aesthetic of modern composition rather than folk song. A recording of this arrangement has been difficult to track down and it is possible that it does not exist.

The first Page of Joseph Achron's arrangement, published in 1940. The poem is credited here to S. Sinani, an additional pseudonym of Rapoport.

The melody, as it was published by Glattstein, is in a g-minor mode and it has four melodic phrases that follow the four lines of each stanza. The first line ends on the fifth tone, the second on the third. The final section of the song, comprising the final two lines of the stanza, repeats once. It ends on the mode’s third note in the first repetition and then on the finalis in the second one.

This version of the melody was published by A.Z. Idelsohn in 1932 in the ninth volume of his Thesaurus of Hebrew Oriental Melodies and was classified by him as a melody with a lowered seventh as well as a predominant third, which can be seen by the dominant place that the mode’s third tone has in the melody. An additional version of the melody, with minor variations, was published by Ruth Rubin in her 1968 booklet Yiddish Folksongs of Social Significance.

While this song was one of the most popular Bundist songs, there are only few recordings of it available. Israel’s National Library has an ethnographic recording of Lazar Vishniak singing the first stanza of the song in 1915 in a Frankfurt P.O.W. camp [Recording can be listened to here at 12:40]. One of the earliest commercial recordings appeared in 1957 on a Workmen's Circle recording of Yiddish songs. The album was narrated by Joseph Mlotek, arranged by Vladimir Heifetz, and was performed by singers Sidor Belarsky and Masha Benya [Recording available here through the link titled "side B" at 10:32]. It was released again in 1999 by YIVO as part of the album In Love and In Struggle: The Musical Legacy of the Bund, performed by Dan Rous with Zalman Mlotek accompanying on the piano [Recording available here, track 8]. In 2006 it was released again by Michael Alpert and Stuart Brotman on their album The Upward Flight: The Musical World of S. An-sky which accompanied the book of essays on An-sky The Worlds of S. An-sky: A Russian Jewish Intellectual at the Turn of the Century, edited by Gabriella Safran and Steven J. Zipperstein.

All of the aforementioned recordings are abridged versions of the poem. Belarsky and Benya sing only the first and final stanza. The versions featured on In Love and In Struggle and The Upward Flight both have the four stanzas published in Gelbart's 1945 songbook. The only version that features all ten stanzas, and therefore contains all of the indictments against the Jewish establishments found in An-sky's poem, was released in 2008 by the band The Unternationale, a collaboration between Daniel Kahn, Psoy Korolenko, and Oy Division.

Daniel Kahn has been a prominent voice in the contemporary klezmer scene for much of the past decade. He is originally from Detroit but has been working from Berlin in recent years. His albums contain reworking of old Yiddish songs many of which of socialist and anarchist sentiments, along with occasional German cabaret and a few originals. He has been vocal of the connection that he feels between the radical ideals of the old songs that he sings and their relevance to contemporary politics and questions of identity [See this interview for example]. Psoy Korolenko, the pseudonym of Russian literary scholar Pavel Eduardovich Lion, has been singing and recording songs in Russian, in Yiddish, and in other languages since the beginning of the twenty-first century. Oy Division is an Israeli klezmer band who have been active since 2006 performing at concerts, weddings, and festivals in Israel and all over the world. The band is comprised of accordionist Assaf Talmudi, clarinetist Eyal Talmudi, Gershon Leizersohn on violins and vocals, Avichai Tuchman on double-bass, and Noam Inbar, who has since left the group, on vocals, percussion, and accordion. Like Kahn, the have been vocal about the contemporary political relevance and the old songs that they sing [See this interview in Hebrew].

The version featured on this album has Kahn singing and accompanying himself on the accordion. Kahn does not sing the final line twice but rather sings it once, ending on the mode's tonic rather than its third note. This is possibly because of the length of the unabridged poem as well as the fact that he sings all of the stanzas in both Yiddish and in English.

As tens of thousands will head to the streets today across the globe in support of workers' struggles, the contemporary performances of this song shed light on the continued relevance of the ideals and questions raised by those who were struggling for rights and dignity over a century ago.

Zemtsovsky, Izaly. 2006. The musical Strands of An-sky's texts and contexts. In The Worlds of S.An- sky: A Russian Jewish Intellectual at the Turn of the Century, edited by Gabriella Safran and Steven J. Zipperstein, 281-306. Stanford: Stanford University Press.

Zipperstein, Stephen J. 2006. “Introduction: An-sky and the Guises of Modern Jewish Culture.” In The Worlds of S.An-sky: A Russian Jewish Intellectual at the Turn of the Century, edited by Gabriella Safran and Steven J. Zipperstein, 281-306. Stanford: Stanford University Press.

Performed by Michael Alpert and Stuart Brotman from their 2006 album The Upward Flight: The Musical World of S. An-sky

Music and poem scanned from Y. Glattstein's 1918 booklet Freiheits Lieder. Here the poem is credited to S. Sinani, an additional pseudonym of Rapoport.