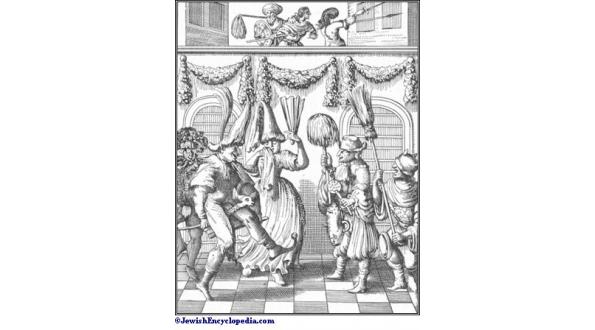 Hag Purim – The story behind its melody

As Purim, “the Jewish carnival,” arrives, we dedicate the Song of the Month to a very popular Eastern European Ashkenazi melody that, in the early 1920s, was set by the poet Levin Kipnis to the lyrics of his song “Hag Purim” (The Purim Festival). This setting soon became one of the canonical children songs for Purim in Europe and in the Jewish settlement in Palestine/Israel where it remains alive to this day among Israeli children.

As a most widely recognized melody in the Eastern European Jewish world, the melody of “Hag Purim” was previously set to a variety of religious poems in Hebrew and Yiddish. It was also featured in many publications of Jewish folk songs in the early 20th century as a wordless Hassidic niggun as well as a melody for the Sabbath zemer “Menuha vesimha.” In this last setting it appeared in the German-Jewish journal Ost und West in 1910 (example 1) and in Kisselgof's Jewish folk song collection of 1912 (example 2). The similarity between these two versions appears to suggest that both stem from the collection of Leo Winz, the German publisher of Kisselgof's collection as well as the editor of Ost und West. Later on, “Menuha vesimha” was arranged for a four part men's choir by Solomon Ancis and published in New York in 1945 (example 3).

The setting of this melody to “Menuha vesimha” was part of the oral tradition of Sabbath table songs (zemirot shabbat) across the Eastern European Jewish diaspora. It was sung by families in New York, Chernobyl in Ukraine (Heller 1990) and Budapest in Hungary (example 4). In all these examples, the second part of the melody is different from the second part of “Hag Purim” (sung to the words "hava nar'isha rash rash rash").

In his article about the Hassidic niggun in the modern Hebrew song repertory, Yaacov Mazor mentions the same melody in relation to the dancing of the seventh Hakkafah for Simhat Torah among the Hassidim of the Boyan dynasty (Mazor 2005: 116-119). This four part Hassidic melody includes the first two sections of the "Hag Purim" melody (including the melody for "hava nar’isha" which is absent in other Eastern European Jewish sources), a third part with new musical material, and a return to the second part as the conclusion of the piece in the typical Hassidic ABCB form.

Mazor also mentions that besides "Hag Purim" the melody was sung in Israel to "Street songs", urban ditties improvised by the youngsters, among them: "Yu lay lay, yu lay lay, mah na’ase bli ‘avoda" (Yu lay lay, yu lay lay, what shall we do without work) or "Ma kara, ma kara, nishbera hake’ara" (What happened, what happened, the bowl has broken; Mazor 2005, p. 116, fn. 77). Rare archival footage from March 1933 shows the Zionist youth from the Tahkemoni Hebrew school in Munkács (part of Hungary prior to World War II; today Mukacheve in Ukraine) dancing the hora to the four-section Hassidic niggun mentioned by Mazor but to the words "hey yulay yulaylay".

Moisei Beregovsky documented and published a version of this tune as a wordless niggun under the title of “Freylekhs” in his posthumous volume Evreiskie narodnye pesni (example 5). It is possible that Beregovsky heard this dance tune played by a klezmer instrumental ensemble.

The melody was incorrectly attributed to the Russian Jewish composer Joel Engel in a setting of a German poem about the Sabbath candles that appeared in 1929 in a musical supplement to the German Jewish newspaper Israelitischen Familienblatt published in Hamburg (see example 6). This song is the German version of “Liqrat Shabbat” by Sh. Ben Zion (Simcha Alter Gutmann, the father of the renowned Israeli painter Nachum Gutmann), included in the collection edited by Joel Engel titled 50 zemirot le-yeladim (50 Songs for Children, Berlin: Yuval, 1923, no. 5) which in turn derives from a collection of songs in Yiddish edited by Joel Engel titled 50 Jüdische Kinderlieder (Moskva: 1916 [date of signature in the introduction], no.5).

It is not clear when exactly Levin Kipnis wrote the words of “Hag Purim” to this melody. According to one version, on his way to his art studies at the Bezalel art academy in Jerusalem, the young Kipnis used to pass by a kindergarten and was asked by the kindergarten teacher to contribute to the repertoire of Hanukkah songs. His efforts were so successful that he was requested to write songs for all the Jewish festivals. His holydays' songs were immediately adopted by kindergarten teachers and sung by children all over the Jewish community in British Palestine (Naor 2008). The songs were published periodically by Kipnis and gathered in his 1923 collection of children’s songs titled Maharozet which he published in Germany during his short stay there (example 7). Soon after its publication, “Hag Purim” spread outside of Palestine; it appeared in 1928 in the USA in a collection edited by Harry Coopersmith (example 8) and in Germany, in the Zionist songsters Shirei Erez Yisrael (example 9) and Hava naschira (example 10) both published in 1935.

“Hag Purim” remains a staple of the Purim song repertoire in Israel and it is sung in kindergartens, schools, and Purim festivities until the present day. These by-now canonical songs, sung seasonally by preschool children, retain stylistic music features of the early Hebrew song, which are otherwise absent from the current Israeli soundscape. Within the kindergarten repertoire, songs about Jewish festivals were particularly popular and remained part of the festive repertoire sung also by adults. On the other hand, many other Hebrew songs for the year cycle have fallen into oblivion and therefore disappeared from the living practice.1

This last change in the text could be seen as a reflection of the socio-cultural shift in the way Purim is conceived by the secular Israeli Jewish society, from a religious festival to a children's festival of carnavalesque character. However the more probable reason for this shift is the similarity in the pronunciation of both words that begin with "la-ye" and end on "dim".

Although today it is mostly known as the tune of "Hag Purim," the melody is still adapted to liturgical and paraliturgical texts in prose. For example it is sung for the second section of the “Aleinu le-shabeah” prayer at the end of the Sabbath morning services in Ashkenazi synagogues, mainly outside of Israel, and some families sing it after the Hanukkah candle lighting to the text of “’Al hanissim.”

1 Many Hebrew children's songs from the pre-state period that were relatively well-known and fell into oblivion can be heard in the JMRC production "Cute Boy, Charming Girl" http://www.jewish-music.huji.ac.il/content/cute-boy-charming-girl-childrens-songs-modern-hebrew-nation-1882-1948 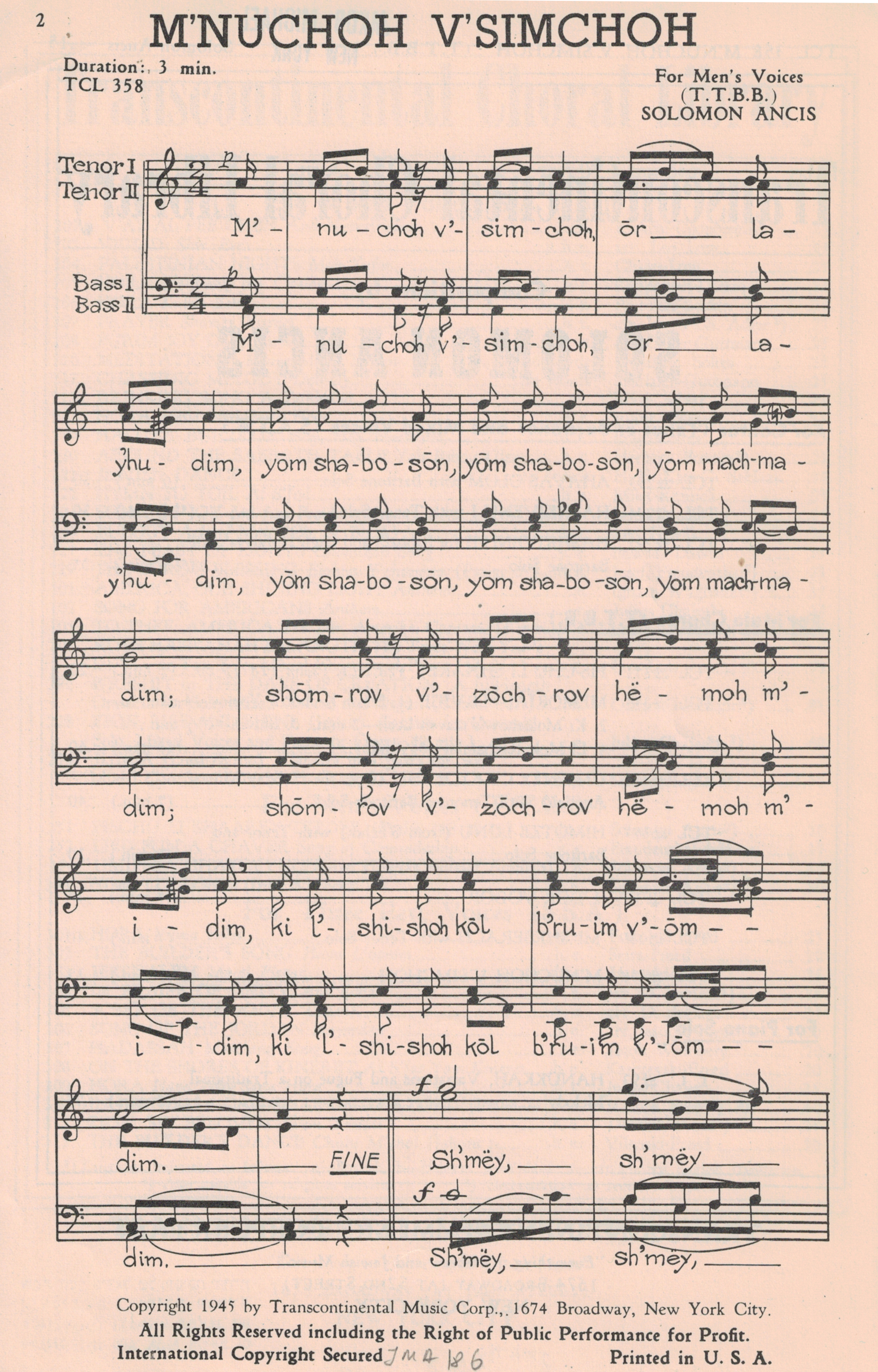 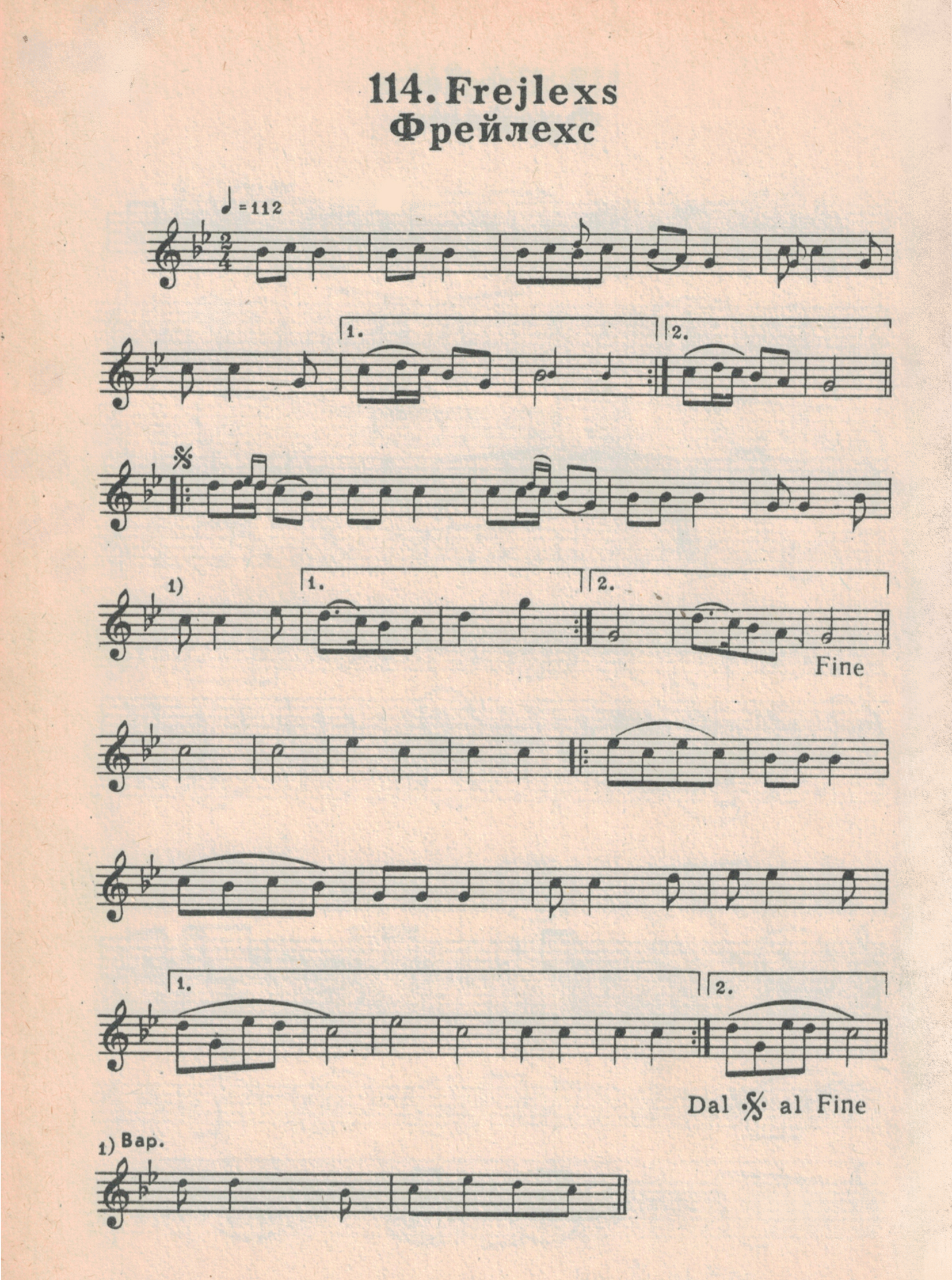 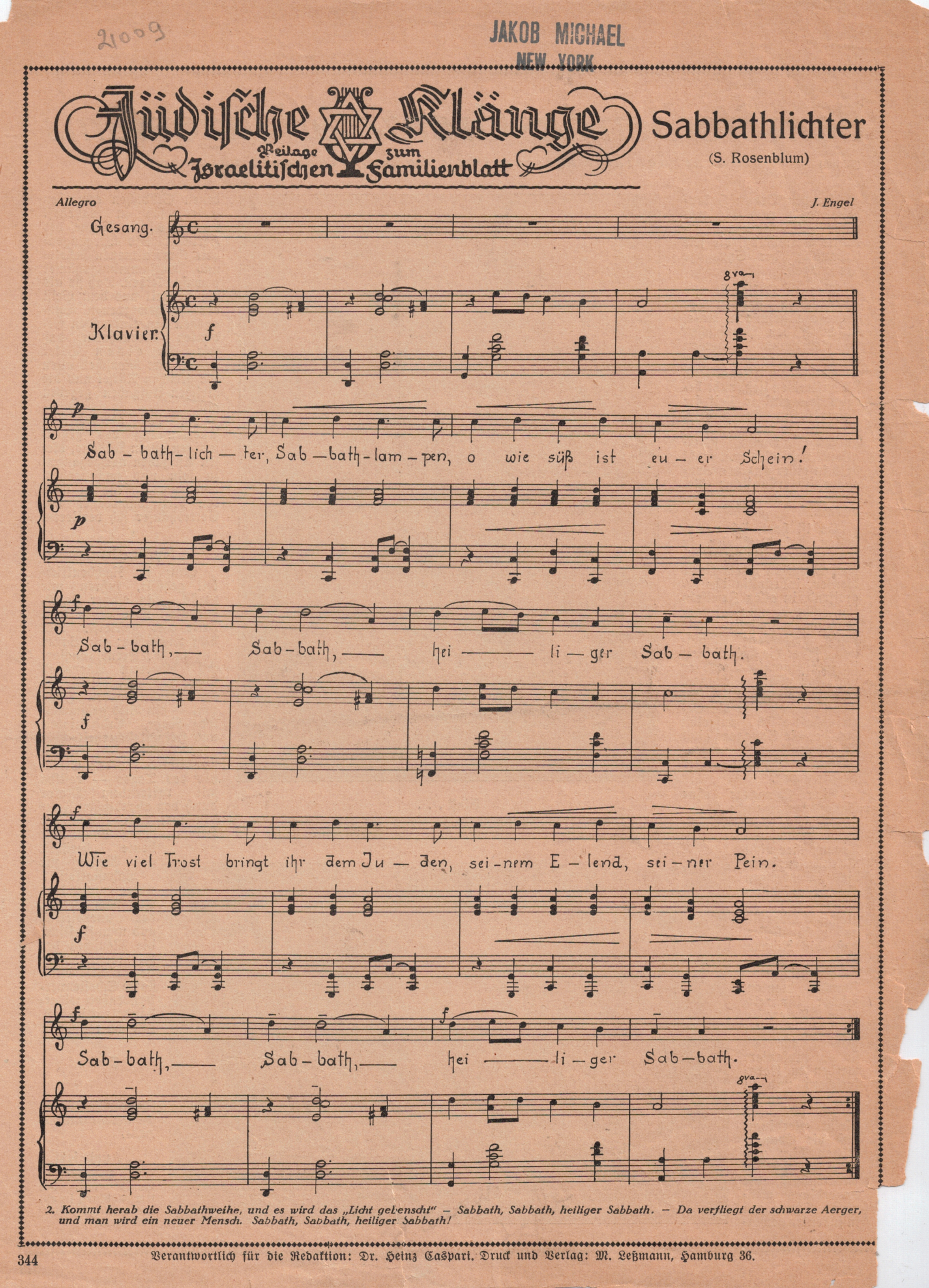 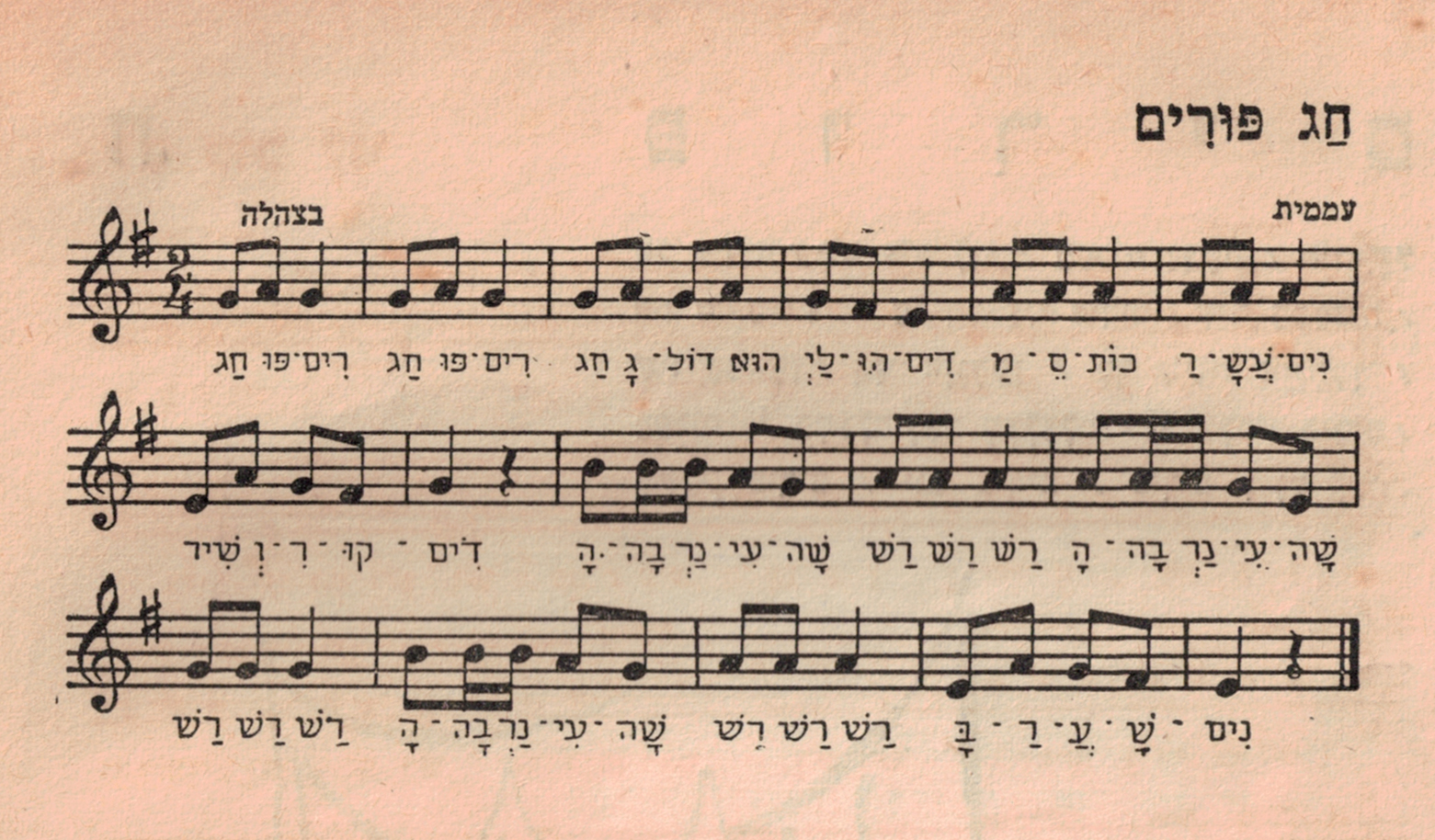 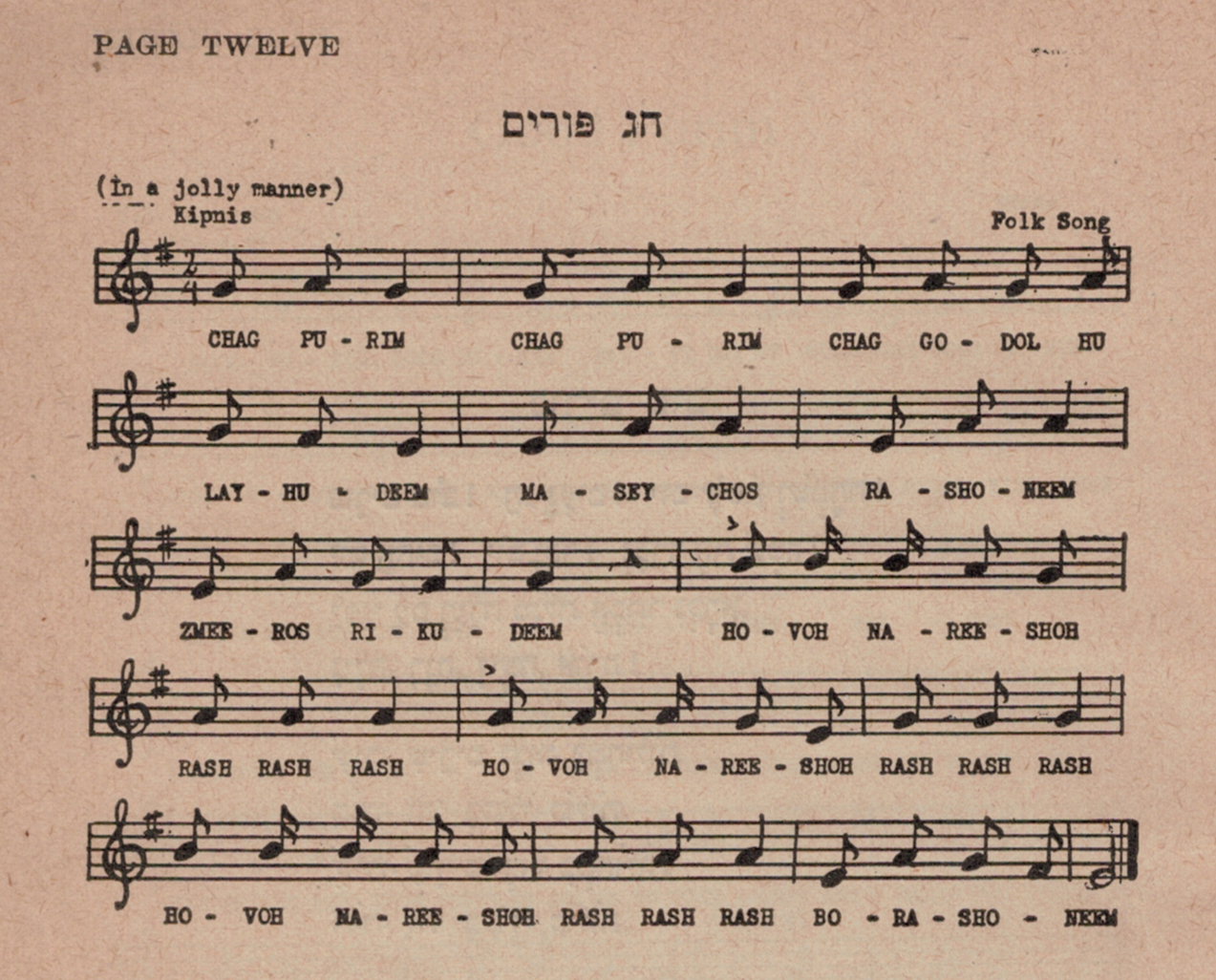 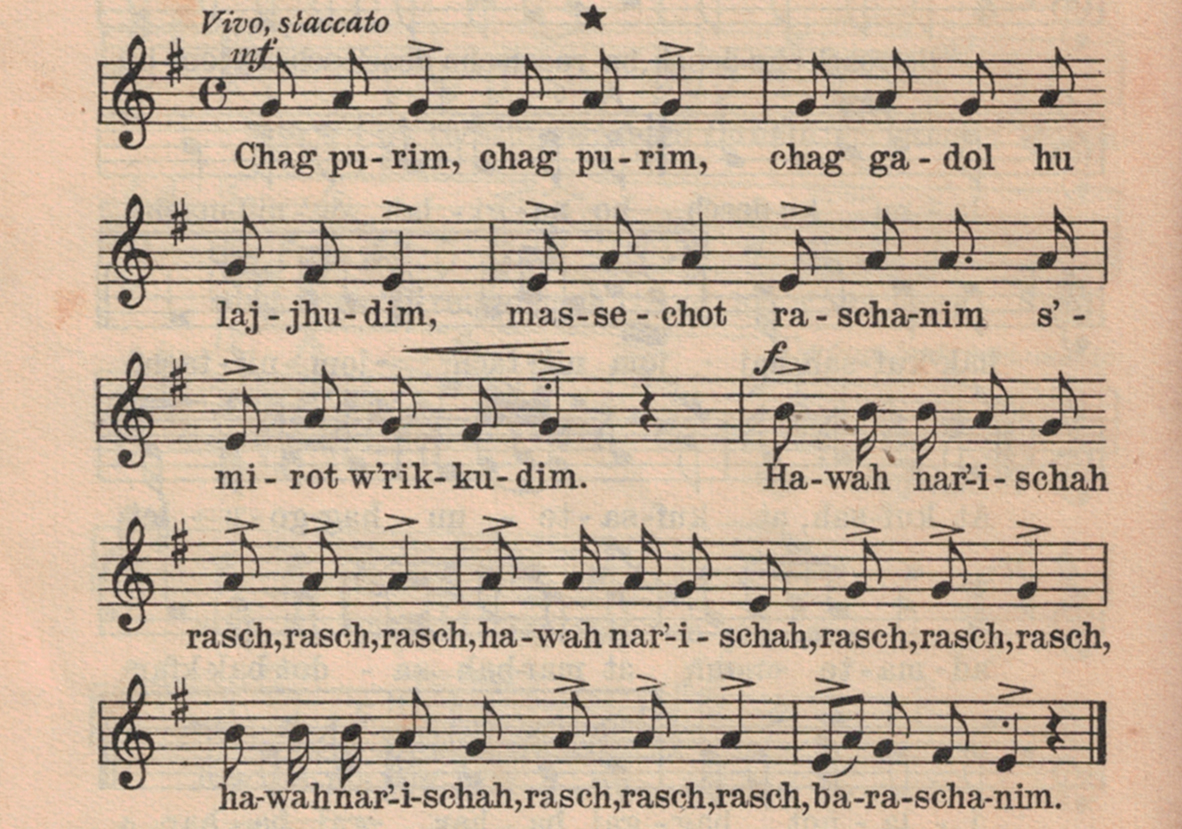 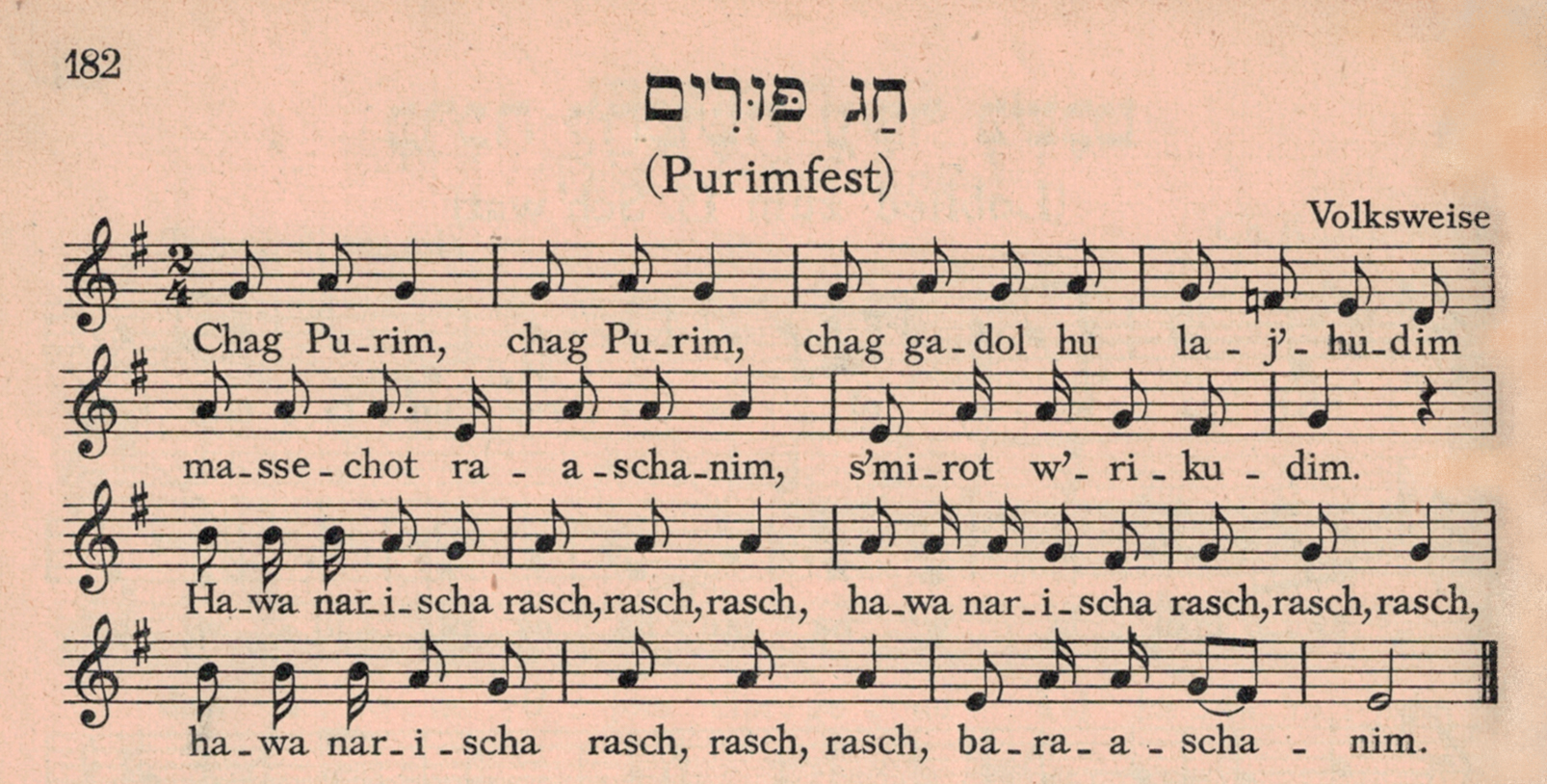