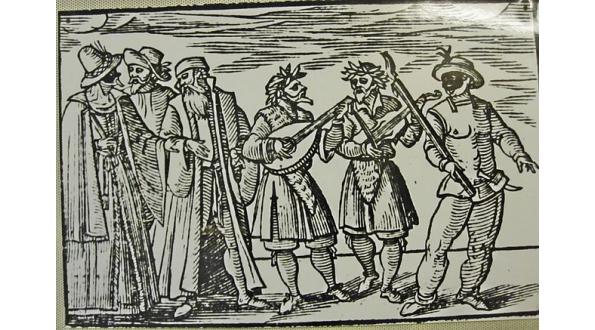 In the last Song of the Month we introduced the song for Purim ‘Haint Iz Purim, Brider’ (Today is Purim, Brothers). Our research led us to several versions and variants of this song, reflecting once again the intricate ways in which Jewish repertoires were constructed by diverse agents in the modern period. One of the recordings of this song that we were able to excavate from the archives is the subject of this second (and probably not last) chapter on ‘Haint Iz Purim, Brider.’

The recordings’ section of the Jacob Michael Collection of Jewish Music at the National Sound Archives of the Israel National Library, a still largely unexplored treasure of Jewish Musical Americana, includes a magnificent recording of ‘Haint Iz Purim, Brider’ by the Khaznte (female Cantor) Perele Feig (1910-1987). This recording possibly originates in one of Perele’s broadcasts of the 1950s on the WEVD radio station in New York City. The accompanist, in this case on pump organ, is probably Abraham Ellstein, who was a frequent collaborator of Feig's.

The piece, delivered by Feig in her unique, wide-ranging style, is in fact a suite of Purim songs. It opens with ‘Haint Iz Purim, Brider,’ which eventually becomes a refrain used between the other songs of the suite. Amid these repetitions of ‘Haint Iz Purim, Brider’ the suite includes two other famous Purim songs. The most prominent one in terms of its structure and length is a unique cantorial rendition of the famous ‘Shoshanat Yaakov,’ which is sung in Ashkenazi synagogues after the evening reading of the megillah (Scroll of Esther). The text of this song consists in fact of the last two stanzas of the anonymous piyyut for Purim ‘Asher heni ‘etzat goyim,’ an ancient piyyut with an alphabetical acrostic that functions as a poetical extension of the blessing by the megillah reader after the reading. In the course of time it became a common practice to sing the last stanzas of this piyyut with a variety of rhythmic melodies, a tradition that was maintained in the modern Israeli repertoire of Purim songs, especially for children.

‘Shoshanat Yaakov’ includes therefore the stanza before the last (on the Hebrew letter “shin”), the last one (on the letter “tav”) and the “coda” (additional stanza after the alphabetic acrostic) of the piyyut. Feig develops the first line of each stanza as a cantorial recitative without a clear beat, which then flows into a dance niggun. This type of performance recalls the patterns of singing ‘Shoshanat Yaakov’ by the Hassidim of the Modzhitz dynasty (called after Modrzyce, today one of the boroughs of the town of Dęblin in Poland).

The second song of the suite (starting at 5:35) is no other than ‘Hag Purim, Hag Purim,’ a poem by Levin Kipnis to which we have dedicated an extensive study in one of our previous Song of the Month. We can now add new information to what we wrote previously about the popular Hassidic niggun used as a setting for Kipnis' poetry. In addition to those suggested at the time by Yaakov Mazor, there are several other possibilities regarding the origin of this niggun and, as it often happens in the world of Hassidic song, the final answer to this question – the original source of the 'Hag Purim' melody –  will remain an open one.

According to Elie Halevy (information published in the website www.zemereshet.co.il) the niggun of ‘Hag Purim, Hag Purim’ served as the seventh out of the seven dance melodies used for the seven Hakkafot with the Torah Scrolls on Simhat Torah at the court of the Polish Hassidic dynasty of Kozhnitz (Yiddish name of the town of Kozienice, in Eastern Central Poland). From there the niggun spread to other Hassidic centers, such as Belz (in the L’viv region of Western Ukraine, formerly part of Galicia). Similar to what happened with many other Hassidic niggunim, Zionist circles, especially youth movements in Poland and Germany, adopted this wordless Hassidic niggun as a hora dance. The poet Levin Kipnis therefore had several venues to access to this famous Hassidic melody. After its “adoption” by the Zionists, the Belz Hassidim dropped this niggun from their Simhat Torah celebrations following a request by the Belzer Rebbe, a notorious opponent of the Zionist movement. The Hassidic courts deriving from the Chernobyl dynasty shared many niggunim with Belz, including the present one (as noticed by Mazor). However, unlike the Belz court, the Chernobyl dynasty continues to sing the niggun to the seventh Hakkafah on Simhat Torah until the present day.

Feig sings Kipnis’ ‘Hag Purim, Hag Purim’ in Hebrew and Yiddish, a common practice in American Jewish communities at the time. All in all, this Purim suite is a thoroughly Hassidic one, even though the original wordless niggunim are mediated by their adoption to modern Yiddish and Hebrew song texts.