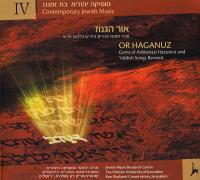 Yeruham Blindman served as a cantor in Kishnev, Tarnopol and Berdichev. By 1834 he was touring extensively as a cantor for Synagogues throughout Poland and the Ukraine. He became known as “Yeruham Hakatan” (the little one) because of his small stature. Blindman was admired for his tenor voice with unlimited falsetto range and his improvisatory vocal style. Although he only had a basic musical education, he composed many arrangements for liturgical music using melodies from Jewish folk songs.