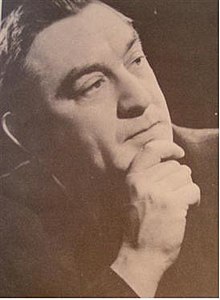 Nahum Nardi was born Nahum Narodietzky in 1901 to a religious-Zionist family in Kiev, Ukraine. He was named after his uncle Dudu "Noyhem," who was the court rabbi of the community. He began his piano studies at age seven, further pursuing them at the Kiev Conservatory, where he graduated with honors in 1919. Subsequently, he studied at the Warsaw Conservatory and at the Vienna Music Academy, graduating in 1922. Following his graduation, Nardi began performing across Europe, playing classical repertoire in his concerts. In 1923 he immigrated to Palestine and continued performing, combining his classical repertoire with folk music, such as Russian folksongs, Hassidic music and Hebrew songs. In addition to giving concerts, he also worked as a piano teacher. During the same period, following the advice of Itamar Ben-Avi, the Narodietzky family decided to change its name to Nardi.

In May 1929, Nardi and the violinist Moshe Weisbord, whom he accompanied on the piano, went on tour in Europe. During that tour, while visiting the Jewish Community center in Berlin, Nardi met the Yemenite singer Brakha Tzefira, who studied in Berlin at that time. Their acquaintance lead to marriage and the birth of their daughter Na'ama (1931-1989), and they began a joint concert tour of Jewish communities in Poland, Germany, Latvia, Belgium, Holland and France. In September 1929, Nardi and Tzefira returned to Palestine, and proceeded with their joint concerts. In 1931 they performed in Egypt, in Alexandria and Cairo, where they would perform again five years later. In 1936 they performed at the opening ceremony of The Palestine Broadcasting Service, a performance which established the status of their new music in the eyes of critics.[1]The next year, they recorded several songs for Columbia Records, also embarking on a tour in the U.S. sponsored by the company.

Following their return to Palestine, their relationship became strained, owing partly to a professional dispute. The dispute, according to Tzefira, began when Nardi did not agree to include songs other than his own in their performances.[2] They finally separated In February 1939, though they occasionally performed joint concerts together until July of that year, when they began performing separately. Their separation climaxed in a lawsuit filed by Nardi for rights over their songs, which he lost.

Tzefira's work in collecting melodies and songs from the local Arab residents of Palestine and from Jewish communities from Yemen, Persia, Bukhara and the Sephardic community, had a unique influence on Nardi's musical development. During their work together he arranged the melodies she sang, and he gave them a new interpretation, while all the while composing new melodies in the same spirit. The melodies of songs like Aley Giv'a[3], Yesh Li Gan, and Ben Nahar Prat, are examples of melodies with Arabic origins. Nardi developed a unique style of piano accompaniment for his concerts with Tzefira and for their new songs.

After his separation from Tzefira, Nardi went back to playing classical concert music, for which he received ambivalent criticism. From thereafter he turned to tutoring and accompanying other singers, most of them of Yemenite origin. Gradually he retired from the concert hall. Also, according to Yerimi, due to the demanding preparations that these kinds of concerts required, he returned to focusing on composition and accompanying and training singers to perform his songs. In 1947 he represented Israel at the "World Congress of Music and Sound" in Paris, where his music was received with enthusiasm. In 1949 the U.S. television network NBC aired a show about the life and work of Nardi. During the same year, Nardi composed the ballet suite Mapala Venitzahon which was performed at Madison Square Garden in New York.

Nardi established a girls' choir, and invited the singer Ahuva Tsadok to sing in it. Subsequently, the two were married in 1955 and had a son, Yair. With Tsadok, Nardi performed in concerts around Israel, and in 1956, they embarked on a long tour of the U.S. During this tour they performed at Carnegie Hall and at many other famous New York halls. The couple divorced after three years of marriage. Nardi continued working with other singers, including Miryam Ya'akobi, whom he accompanied in concerts in Israel and the U.S.

Nardi's line of work with female Yemenite singers was preserved throughout his career, likely due to his will to achieve proper expression for his oriental-influenced music, and to work with a singer who could transmit his music. The Yemenite singers he worked with include Brakha Tzefira, Shoshana Damari, Esther Gamli'elit, Hanna Aharoni, Ahuva Tsadok, and Miryam Ya'akovi. In addition, he also played with singers of different origin, such as Sarah Ye'ari and Marta Schlamme, producing somewhat different results.

As a composer, Nardi composed 1,111 songs, as mentioned by Eliyahu Cohen in a Radio interview with the composer. Three hundred of these are children's songs, and eighty are set to Hayim Nachman Bialik's poems (see video example). Nardi's acquaintance with Bialik began when he invited the poet to his concert in order for him to hear the music he composed for his poems. Nardi continued to invite Bialik to listen to new melodies for his children's songs, and the enthusiasm of the poet encouraged Nardi to continue composing Bialik's poems. After Bialik's death, Nardi continued to compose his poems, and when he noticed that he had composed most of his children's songs, he decided to finish the job and compose them all. Nardi also composed other poets' children's songs, such as those of Levin Kipnis. Additional poets whose poems he composed are, to name a few, Natan Alterman (Shir Ha'avoda), Ya'akov Pichman (Al Na Tagidi Li Shalom), Alexander Pen (Shishi Admat Hasharon).

In addition to his songs, Nardi also wrote incidental music for the theater. Several examples include the play Megilat Esther, which was performed at the Erets-Yisraeli Theater[4] of Gnessin, in 1928, and Bamitbakh by Shalom Aleikhem, performed at Habimah Theater in 1947. In the medium of art music, Nardi composed several piano pieces, such as: Fantasia Lemahol; and Yeled Li Nitan which is based on a melody of a Sephardic Romance. And other works, such as: 24 variations for orchestra; Suite for Bassoon and Clarinet; Yemenite Wedding; Shepherd's Suite; Trumpet Concierto; Eastern Suite for Voice, Cello and Clarinet; and several cantatas.

In May 1958, Nardi was awarded with the Alconi Award, (part of the Engel Award). Apart from Bialik, famous personas who appreciated his work include the poet Shaul Tchernichovsky and Albert Einstein. During the last years of his life, Nardi disappeared from the public eye, and lived in relative solitude in Tel Aviv, though he received attention and care from a woman who admired his art.

Nahum Nardi died in Tel Aviv in 1977 following several brain strokes. The Tel Aviv City Council, then headed by mayor Shlomo Lahat, conducted his funeral, and put the gravestone on his grave in Kiryat Sha'ul. After his death his family members, Rahel and Eran Nardi, collected his artistic legacy which included musical scores, recordings, and other documents, and handed it to the Archive of Israeli Music at Tel Aviv University. In September 2005, the Tel Aviv City Council erected a memorial board for Nardi on Kalonymus Street, where Nardi spent his last years. During Tel Aviv's centennial year, the council decided to name a street after Nardi.

* This biography is based on the biography written by Emanuel (Ami) Yarimi for Zemereshet website.

[2] In her book, Kolot Rabim, Tzefira mentioned Y. Admon, E. Amiran and M. Shelem, as composers who she wanted to include in their programs.

[3] The song Bagalil (Aley Giv'a), was recorded by the Debka Fantasia project in 2009. The project included performances of Hebrew folk songs with arabic/ oriental origin, in arrangement that emphasized this sometimes forgotten origin. Listen to the recording in Zemereshet website. 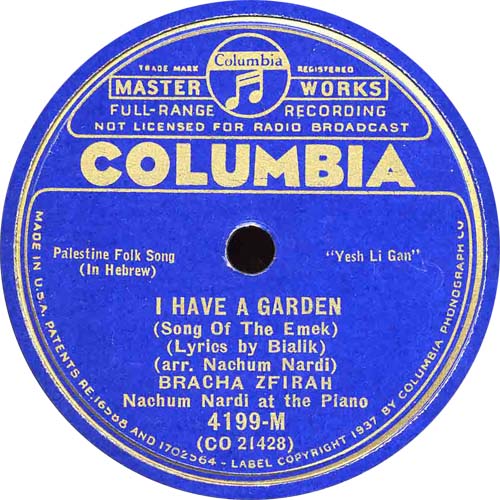 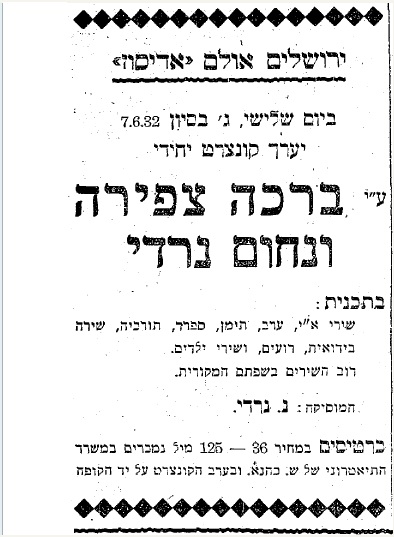 Nahum Nardi was born Nahum Narodietzky in 1901 to a religious-Zionist family in Kiev, Ukraine. He was named after his uncle Dudu "Noyhem," who was the court rabbi of the community. He began his...

Joachim Stutschewsky (Romny, Ukraine, 1891 – Tel-Aviv, 1982, immigrated in 1938), was a well-known cellist, composer, arranger, and writer, a founder of the Society for the Development of Jewish...