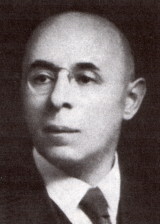 Lazare Saminsky was born in Vale-Gotzulovo[-Hatzulovo], Ukraine. He studied composition at the St. Petersburg Conservatory (1906-1910). In 1908 he became a founding member of the Society for Jewish Folk Music, working as its first secretary. During this period he composed several works, including two symphonies, and the piece Ch’siddish. In 1913 Saminsky was part of the "An-ski" expedition in which he collected Biblical cantillations, prayer chants, melodies, and other sacred musical traditions of the Georgian and Persian Jews in Transcaucasia.

Saminsky left Russia in 1919, following the communist revolution, and in 1920 arrived in the U.S. He settled in New York in 1924, and became the musical director of the reform congregation of Temple Emanu-El, where he worked until the end of his life. In this office, he played a crucial role in the forming of new Jewish music to be performed in the Reform synagogues of America. This he achieved by composing his own works, changing the existing repertoire, and encouraging Jewish composers to compose Jewish liturgical works. He aspired for a more serious music that will maintain a connection with older traditions of Jewish music. According to the Milken Archive, many of his works were eventually not used as much as other works of his "school." However, some of his settings have become standards in the reform movement. His name has generally been forgotten among those of the important American immigrants of the 20th century.