The new 6 CD set of the series “Anthology of Musical Traditions in Israel”, “The Jerusalem Sephardi Baqqashot at the Har Tzyion Synagogue”, originated in a comprehensive study of the liturgical music of the “Jerusalem-Sephardi” tradition which Dr. Essica Marks has been conducting since 2001, under the auspices of the Jewish Music Research Centre and with the support of the Israel Science Foundation. Unlike the other disks produced up to now in the series, the present project is not based on existing archival recordings, but on a comprehensive series of recordings made in the Har Tzyion synagogue in the Old City of Jerusalem in 2003 specifically for the production of this series.

While the “Jerusalem-Sephardi” Baqqashot, a branch of the Jewish tradition from Aleppo (Syria), has attracted considerable attention from researchers in Israel and the USA since the beginning of the 20th century, the number of commercial recordings from this rich musical lore is scant. In the 1980s cassettes of this repertoire were published by Renanot – The Institute of Jewish Music in Jerusalem and by the Sephardic Archives of the Syrian Jewish Community in Brooklyn. However, the present recordings offer an ethnographical dimension and quality that were missing in previous releases.

The veteran cantor Abraham Caspi, a master of the Jerusalem Sephardi tradition, directed the recording process meticulously. Although the Jerusalem Sephardi Baqqashot are today performed in various synagogues in Israel, and even beyond its borders, it is generally accepted that the performance of Abraham Caspi and the Har Tzyion congregation is one of the most authentic expressions of this colorful musical event that has been performed in Jerusalem over the past hundred and fifty years. The Jewish Music Research Centre extends heart-felt thanks to him, and to his congregation, without whose agreement and enthusiastic participation this important enterprise would never have been accomplished. 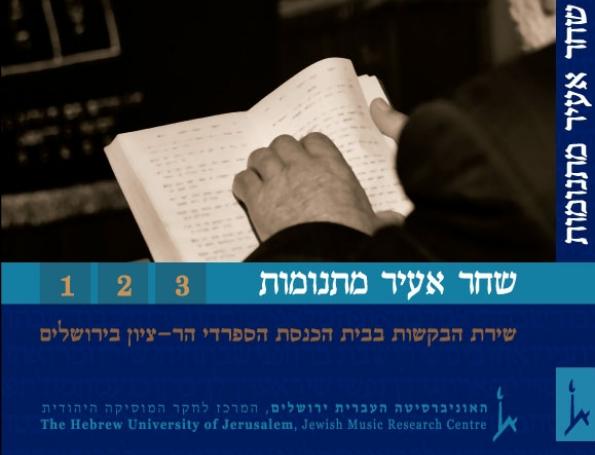 Ani ashava' ba-boker (I shall cry out in the morning)

Author: Joseph Siton. The 'lahan' consists of four musical units (a-a-b-a) corresponding to the four verses of each of the eight strophes.

Male pi shira (My mouth is full of song)

Author: Meir. The 'lahan' is divided into three sections. The first is sung by the congregation the second and third constitute an antiphonal structure sung by solo singer and congregation. There is a modal transition between the sections: the first is based on the Ajam 'maqam' the second on Saba and the third on Jaharqa. Melodic structure: first section a-b-a-b (verses 1 2 3 4); second section c-c'-d (verse 5); third section e-e'-e'-h (verse 6 [7]).

The new 6 CD set of the series “Anthology of Musical Traditions in Israel”, “The Jerusalem Sephardi Baqqashot at the Har Tzyion Synagogue”, originated in a comprehensive study...

An introduction to a score of synagogue music and hymns, transcribed, arranged and harmonized by Emanuel Abraham Aguilar (see separated entry). The essay deals with the history of Spanish Jewish...