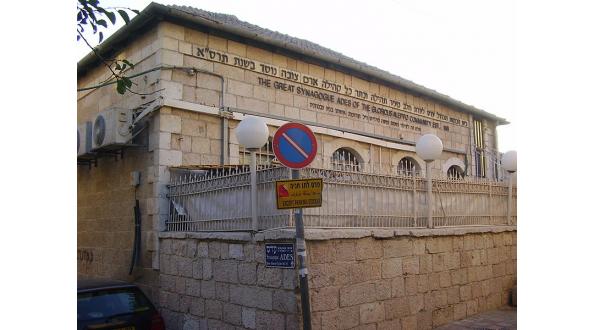 Hay ram galeh is a rather recent example of the extensive practice of contrafactum that has characterized the composition of new piyyutim in the Middle East for many centuries. The zenith of this practice among Sephardic and Oriental Jews and the model for subsequent creativity is found in the work of Rabbi Israel Najara. Hay Ram Galeh is a contrafactum of the modern Egyptian song Hayrana Laih by Daoud Hosni that featured in our previous Song of the Month.

Hay ram galeh was written by Nissim ben Yitzhak Halevi, one of the veteran paytanim of the Ades synagogue in the Nahlaot quarter of Jerusalem. The Ades synagogue was founded in 1901 by the Jewish immigrants from Aleppo (northern Syria) and since its foundation it became major hub for liturgical and paraliturgical music in the modern western section of Jerusalem. It also played an important role in the consolidation of the so-called Sephardic-Jerusalemite liturgical style. This style merges diverse Jewish practices from the Middle East, such as the urban Turkish-Ottoman style that was prevalent in the major cities of the Ottoman Empire, the Aleppo muwashshahat and the rising new styles of Egyptian Arabic music developing from the late 19th century onwards. The new Egyptian song became hegemonic throughout the Arab world partly due to the development of the music industry in Cairo, and reached a wide audience through 78 rpm records, radio broadcasts and later on via musical films. Jerusalem Jews embedded in the modern Egyptian Arab culture in Mandatory Palestine were just another avid client for this music that also found a place in Jewish religious contexts. It is important to stress that the public attending the Ades synagogue became in the course of the twentieth century truly a multi-ethnic one. Persian, Kurdish, Yemenite and Bucharian Jews joined the ranks of the Aleppo immigrants creating a sonic mosaic that incorporated various performing styles and musical genres.

Hay ram galeh represents a late stage in the rooted Middle Eastern Sephardic tradition of turning secular Arabic songs into sacred Hebrew ones. Halevi is certainly not a trained poet but rather a performer thoroughly involved in the singing of piyyutim. This experience resulted in his comand of a wide range of Hebrew formulae that can be assembled to substitute the original Arabic text of the song whose melody is adopted. The desire to perform the beloved music is obvious in this operation because the ensuing Hebrew text does not shine otherwise as an independent piece of literature. It only makes sense in the context of its musical performance, for it reverberates with the original Arabic song that is well known to the public at the Ades synagogue. If at all, this procedure for creating new texts can be viewed as a mechanical case of intertextuality whereas phrases from extant piyyutim or fragments of Biblical verses are interwoven into a new work on the basis of their affinity to the Arab text that is being substituted. Halevi is prolific in creating such texts, a talent that can be observed in other of his songs set to popular Egyptian tunes such as Yah retzeni rahem alai Yah[1] and Mul Eli vegodlo.[2]

The song is performed by Moshe Habousha, one of the most distinguished hazzanim and paytanim of the Sephardic-Jerusalem school to grow at the Ades synagogue. Born in Jerusalem in 1962, Habousha’s grandfather was the famous paytan from Baghdad Gorgi Yair, who officiated as cantor in Jerusalem and from whom Habousha absorbed music of the foundations of liturgical music. He officiates as cantor for the undisputed leader of orthodox Sephardic Jews, Rabbi Ovadia Yossef, and performs across Israel and abroad. He is also an accomplished player of the ‘ud and violin. From a young age Habousha also began to record cassettes of contrafacta of favorite modern Egyptian songs written, sometimes on his behalf, by contemporary song writers such as Halevi.

Almog Bahar, one of Israeli’s outspoken modern poets of Sephardic pedigree, discusses the phenomenon of composing new Hebrew lyrics to modern Egyptian songs and the role of Moshe Habousha in introducing this venerable practice to contemporary Israeli audiences. [3] He stresses the dissonance between the original texts of the Arabic songs, some of which are overtly nationalist and anti-Israeli, and the commitment of the descendants of the Jews from Arab countries to preserve this musical repertoire in religious contexts.  At stake here is the power of Arabic music to elevate the soul of the performer and his audience to a heightened religious experience akin to the Arabic tarab.

In the case of our piyyut, Hay ram galeh, we see a compelling example of the paradox of modern Jewish life under the abode of Islam. The composer of the song Daoud Hosni and its undisputed performer, Leyla Mourad, were originally Egyptian Jews immersed in the modern Arab culture of their times. The cultural space that these famous musicians of Jewish origin inhabited in Egypt was shared by other Jews whose fate was totally different. Arabic music and its power to generate enhanced emotional states bridge then between modern Jews separated by a series binary opposites: secular versus religious, national Egyptian versus national Jewish (Zionist), female versus male performer, theatre stage versus synagogue, and so on.

The poet Ahmad Rami wrote an Arabic love song in which the lover sings to his loved one, who resists his courtships. In Nissim ben Yitzhak Halevi’s piyyut the voice of the worshiper appeals to God for favors and in return offers his praises and sacrifices. The act of appealing to a beloved one is therefore the tenuous link between these two songs that share the same melody.  In addition, the texts resonate with each other at the purest sonic level of language, a level devoid of any signification.  Obvious examples are found throughout the song, starting with the opening stanza (and refrain), where Hayrana Laih resonates with Hay ram galeh and el ‘ouloob with el ahuv. The rhyming scheme, aa-bbcb-aa ddcb, aa, eecb, aa and the sound of the rhymes are also identical in both the Arabic and Hebrew song. The poem lacks a fixed poetic meter, but most textual units in both poems consist of five phonetic syllables.

The following table shows the original text of Hay ram galeh with its transliteration and English translation. Words in brackets are variants found in performance, including Habousha’s.  These textual variants are a testimony of the oral transmission of this type of texts. In addition, Habousha shortened the song by not singing the last stanza.

[1]  Details and recording of alai Yah, in  An Invitation to Piyut (in Hebrew): http://www.piyut.org.il/textual/593.html

[2]  Details and recording of Mul Eli vegodlo, in An Invitation to Piyut (in Hebrew): http://www.piyut.org.il/textual/675.html 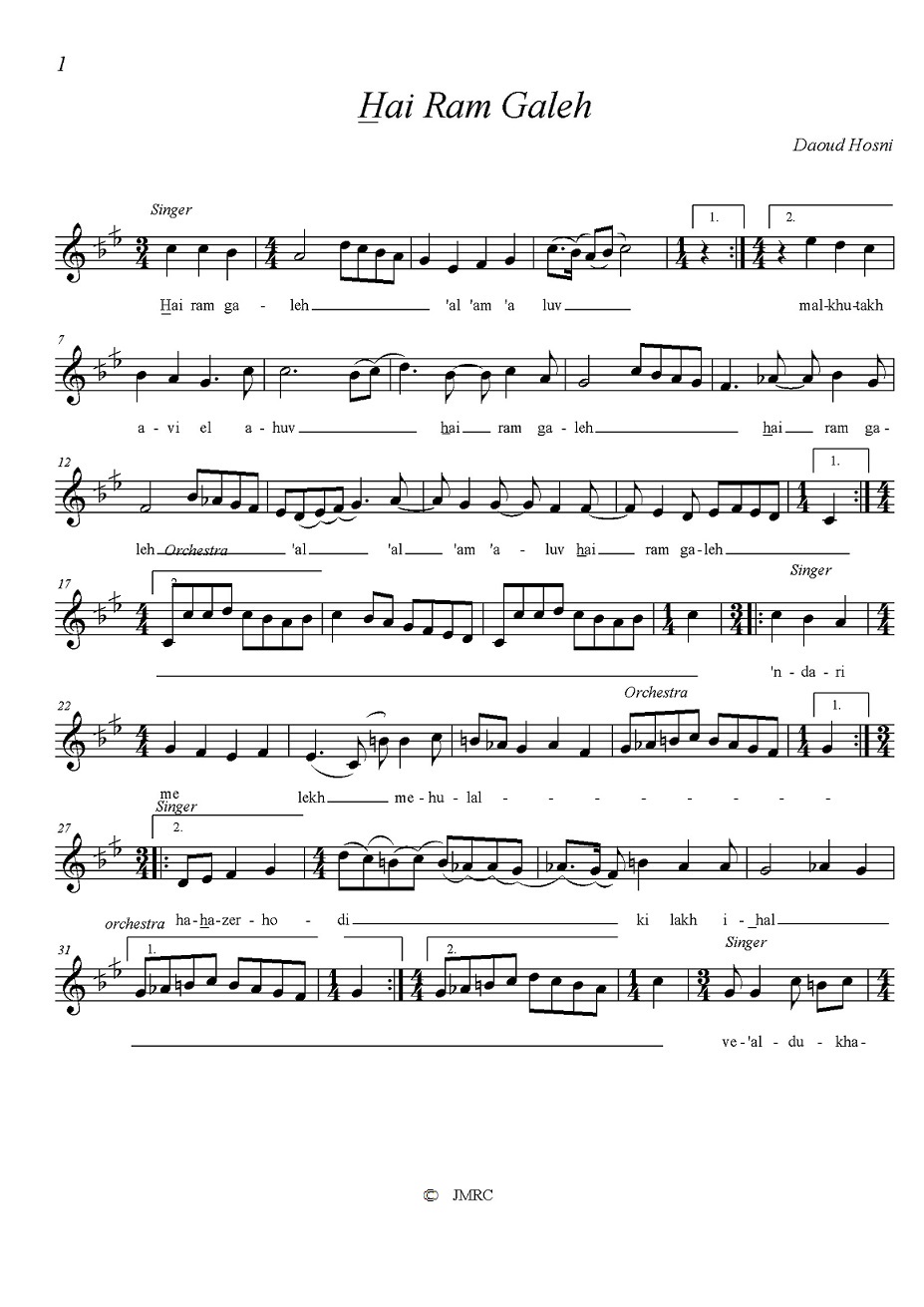